By Exhibit Farm
Mar 09, 2018
in Facts and Numbers,State Ag Spotlight

A couple months ago, we started a new series here on the Exhibit Farm blog that is taking on the daunting task of highlighting the agricultural accomplishments of each of the fifty states. In these posts, you’ll get a taste of the states’ personalities as well as all the stuff they do to help put food on your table day after day.

In January and February, we spotlighted the states of South Dakota and California. Today, we’ll bring our focus back to the midwest and the prairie state of Illinois.

Before we delve into the details of this state’s agricultural industry, let’s take a look at some introductory facts about Illinois. 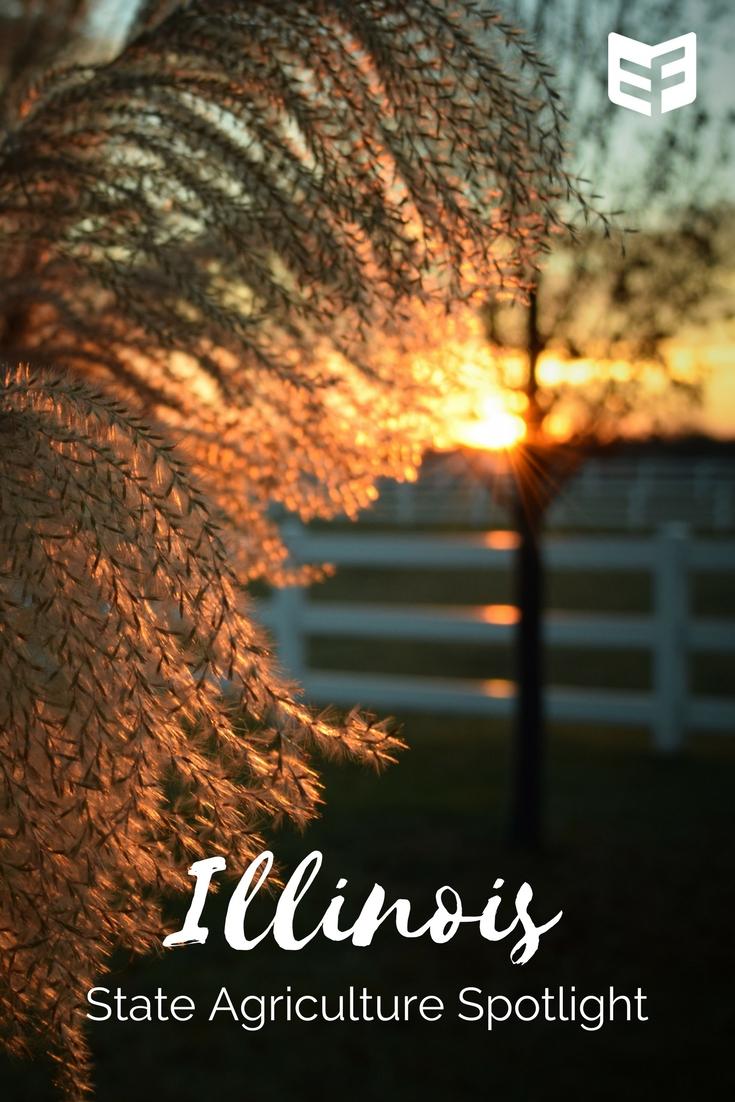 Contrary to popular belief, there’s a lot more to Illinois than just Chicago. In fact, the state that is now known best for its biggest city was actually once better known for its wide open spaces. That’s how it earned the nickname, “The Prairie State.” It’s the state of white-tailed deer, monarch butterflies, and violets. Doesn’t that just scream “prairie land” to you? This state known for its landscape is also known for it’s people. In fact, Illinois was the one-time home of one of America’s most beloved presidents, Abraham Lincoln. Even though Lincoln wasn’t born there and didn’t move to Illinois until his twenties, the adult Lincoln ran a law practice in Springfield for some time and also served on the Illinois House of Representatives. His time in Illinois earned the state the slogan “Land of Lincoln.”

Looking beyond the state’s most famous inhabitant, however, Illinois is the sixth most populous state and the people that make up this population are pretty cool. We know this not just because we actually know some cool people in Illinois but also because the name “Illinois” says it all. According to statesymbolsusa.org, the state’s name comes from the Native American word “Illiniwek” which means “best people.” Good job to Illinoisians for just being honest about themselves. Oh, and also, the state artifact is the pirogue, which is a cool kind of canoe used by Native Americans in the area. You can’t beat that sort of awesomeness.

Illinois vs. the Other 49

So, apparently, Illinois has the “best people” out of all fifty states. But how does its ag industry measure up to the rest of the country? According to the numbers, it actually does pretty well. As the USDA National Agricultural Statistics Service reports, Illinois is one of the top ten states for total value of agricultural products sold. For crops specifically, it ranks number three, according to the latest data. On top of that, when it comes to the biggest cash crops in the country, Illinois is way up there. It’s ranked second for both corn and soybean production. It also ranks high for hogs and pigs, earning a place in the top four.

Farmflavor.com adds a few more accomplishments to Illinois’ list. In an article on Illinois agriculture, they point out that the state is actually “a frontrunner in industries such as soybean processing, meat packing, dairy manufacturing, service industries and foreign exports.” A lot of Illinois’ success is due to its very centralized location, as the Illinois Department of Agriculture website notes. It also has a great transportation system that makes it a great place for the transportation of agricultural products. Some may call the area the “Armpit of America” and have hard feelings about Chicago traffic. But being such a busy place seems to have done well for the state. So maybe it’s not such a bad thing to be at the center of the country.

This prairie country with all its roads and railroads and other transportation systems is home to over 70 thousand farms that spread across more than 26 million acres of prairie land. The land produces all of the basics, such as corn, soybeans, alfalfa, wheat, and oats. But it also grows some less common crops, including various fruits and veggies, and it grows them well.

As a whole, the agricultural industry in Illinois brings in well over $17 billion to the state’s economy every year. It also creates thousands of jobs for American workers. In recent years, the Illinois pork industry alone has employed more than 10,000 people. It’s definitely done some great things for the state. And, for that matter, the Illinois ag industry has done some great things for the entire country too.

When it comes to the state’s personal records in ag, the place Illinois agriculture falls in nationwide productivity for various crops is a pretty good tip as to what agricultural commodities are at the top in the state’s industry. In Illinois, as in many other states, corn is king. According to farmflavor.com, recent stats say that the state produced around 2 billion bushels of corn. This single crop also “accounted for 54.5 percent of total farm cash receipts” in recent years. Most of the corn goes toward making ethanol and animal feed. The state exports a lot of it as well.

Corn’s partner-in-crime in Illinois is the other Illinois crop that ranks high nationally: soybeans. In fact, soybeans are actually the top Illinois ag export, making up more than 30% of all the state’s exports. And, since the state produces millions of bushels of this stuff, there’s plenty to go around, which is why it’s great that there are so many uses for soybeans. In fact, as farmflavor.com points out, we use soybeans  “in everything from animal feed to printer ink.”

Besides also having a hefty pork industry, the state also relies heavily on wheat, cattle, and diary products. Fruits and veggies also have a special spot in the Prairie State. This because “Illinois’ fertile soil allows its farmers to produce a number of fruits and vegetables.” The main ones Illinois farmers grow are apples, peaches, sweet corn, snap beans, and pumpkins. With pumpkins, in fact, Illinois ranks high nationally. The state calls itself “The Great Pumpkin State” from time to time and boasts impressive yields in both ornamental pumpkins and processing pumpkins (i.e., the kind you use for jack-o-lanterns and the kind you use in your Thanksgiving pies). According to University of Illinois Extension, the state produces between 90% and 95% of the nation’s processing pumpkins. So enjoy your pumpkiny treats, and thank an Illinois farmer!

This is just the tip of the iceberg. You have a lot more to get excited about when it comes to Illinois agriculture. But this is all we have for you today.

So now, let me ask you: What do you know about Illinois agriculture? If there’s something we missed, tell us about it in the comments below. We’d love to hear more awesome facts about the state’s ag industry.