By Exhibit Farm
Feb 09, 2018
in Facts and Numbers,State Ag Spotlight

If you remember from last month, January ushered in a brand new series here at the Exhibit Farm blog. In honor of the agricultural industry in our great nation, this series will spotlight the ag industries in each of the fifty states. In these posts, we’ll feature the achievements of each state as contributors to the national and global agricultural industry.

Last month, we began our series by spotlighting the great state of South Dakota. Today, we’ll shift our eyes a little farther westward to the coastal state of California.

Before we delve into the details of this state’s agricultural industry, let’s take a look at some introductory facts about this great state. 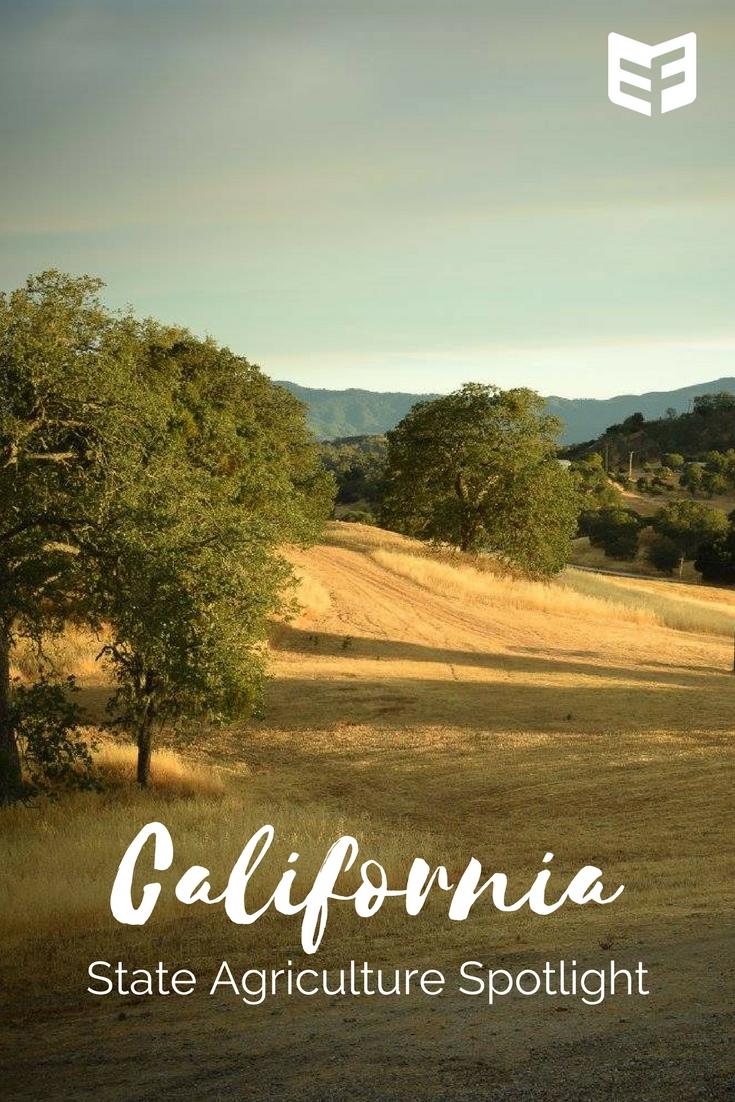 We know California for its priceless landscapes, infinite tourist locations, and sunshiny weather. It’s the home of Hollywood, the Silicone Valley, numerous beautiful beaches, Yosemite, and a lot of famous people. At one time, it was also the home of a large number of grizzly bears. That’s why folks once referred to it as “The Grizzly State.” The grizzly population decreased, however, once people started flooding into the area in search of gold. That’s probably partially how the state earned it’s new nickname: “The Golden State.” To continue honoring the grizzly bears, however, the state chose to include a depiction of one such bear on the state flag.

California vs. the Other 49

California is probably one of the best things that has ever happened to the United States agricultural industry. Thanks in large part to the state’s great climate, California is actually the top state for the total value of agricultural products sold. As the most agriculturally diverse state in the nation, California outstrips all of the other 49 states in the production of numerous major ag products, including the general categories of fruits, vegetables, and milk from cows. California is also at the top for greenhouse plants and tree nuts. Plus, it’s among the top two states for products like sheep and rice.

Not only does California dominate the U.S. ag industry, but it also takes high marks in the world stage. For example, as we learned earlier this week, California is the only state in the U.S. that produces almonds commercially. Now, it turns out that the U.S. provides about 80% of the global almond crop. So, by extension, roughly four out of every five almonds in the world come from California. Yikes. That’s domination, right there.

The state of California is pretty huge, which is why it can hold all of the approximately 76,700 farms that currently exist inside of its borders. These farms cover over 25 million acres and grow anything from corn and cotton to avocados and artichokes. Most of the California land used for farming is concentrated in two areas known as the “Central Valley” and the “Central Coast.”

As a whole, this agriculturally diverse state produces around 400 different agricultural products and contributes over $40 billion to the state’s economy in a single year. Because of these impressive numbers, the state claims agriculture as one of its top industries. Agriculture is up there with the state’s technology and film industries.

In California’s economy, the winning ag product is dairy. As farmflavor.com reports, the California dairy industry brings over $6 billion to the state’s economy. It’s not just big for the state, though. California dairy is pretty big for all of the United States. In fact, Wisconsin may be known as “America’s Dairyland,” but California has actually been the top dairy state since 1993.

Seecalifornia.com says that the state ranks at the top in specific dairy products including milk, butter, ice cream, and yogurt. For cheese, it ranks number two after Wisconsin. Alas, the midwestern dairyland has a pretty significant lead over California in the cheese industry. But, still, a whopping 46% of all California dairy goes into making California cheeses. That’s a lot of cheese. And, heck. That’s a lot of cows. In fact, there are about 1.7 million milk cows in the state that each produce well over 22 thousand pounds of milk in a single year. According to the California Milk Advisory Board, “Approximately one out of every five dairy cows in the U.S. lives in California.”

As we mentioned before, California is also pretty distinguished when it comes to almond production. But dairy and almonds aren’t the only things that California is great at. The U.S. can also thank California for its grapes, and not just grapes used for wine. The state has approximately 475 table grape farms, and these farms produce 99% of all U.S. table grapes, according to farmflavor.com. In addition to almonds and table grapes, there are plenty of other crops that grow almost exclusively in the Golden State. In fact, California produces 100% of the nation’s artichokes and 99% of U.S. dates, olives, pomegranates, and walnuts. On top of that, California ranks second in U.S. corn production and in worldwide pistachio production. Wow.

But, of course, these are just a few of California’s major accomplishments in agriculture.

What else do you know about California agriculture? If there’s something we missed, tell us about it in the comments below. We’d love to hear more awesome facts about the state’s ag industry.