By Exhibit Farm
Jan 12, 2018
in Facts and Numbers,State Ag Spotlight

In this first month of the new year, the team here at Exhibit Farm is kicking off a new tradition. To help foster appreciation for U.S. agriculture, we’ll be spotlighting a different state’s ag industry every month. These spotlights will focus on state-wide achievements in the ag industry. We’ll focus on top commodities as well as commodities unique to the state being spotlighted. We’ll also feature some fun random facts to give you a sneak peek into the culture of that state.

To begin our series, our state spotlight this month will bring you to the fair plains of South Dakota. 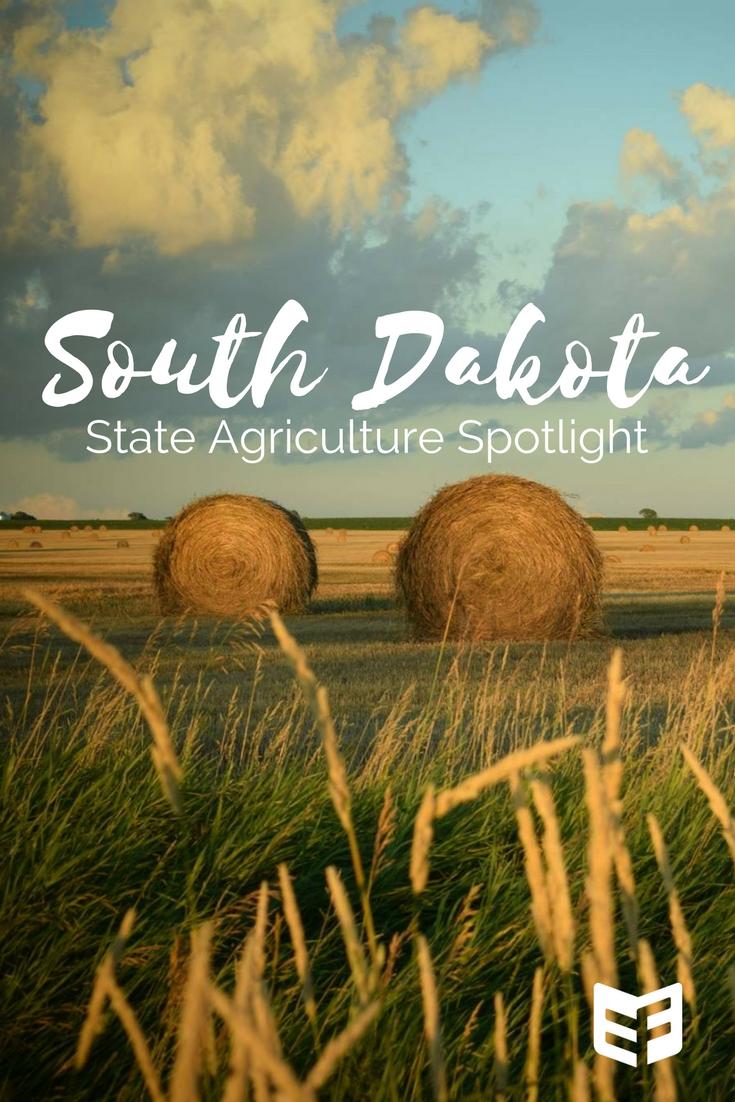 Let’s delve into the details of this state’s agricultural industry. But first, we’ll take a look at some introductory facts about this great state.

To start off, I want to indulge in a moment of severe honesty. For those of you who have never stepped foot in this great state or have only driven through on your way to a more hyped-up location, you probably don’t think of much when you hear the name “South Dakota.”

But those of you who have taken the time to get to know the place—well, you know better. You’ve seen Mt. Rushmore, the Badlands, Crazy Horse, and maybe even the Corn Palace. And there’s a chance you’ve been to the historic buildings in Laura Ingalls Wilder’s De Smet. Despite the state’s rank among the top five least populous states in the nation, South Dakota certainly has its share of hidden gems.

South Dakota is the place to go for intense tornadoes, gorgeous sunsets, and pheasant hunting. It just depends on what mood you’re in and what season it is. It was once known as the “Sunshine State” before Florida somehow took over the nickname. You’ll also hear it referred to as the “Blizzard State” (presumably for the weather phenomenon and not for the Dairy Queen ice cream treat) and the “Land of Infinite Variety.” Its state insect is the honey bee, the state sport is rodeo, and tourists often remember South Dakota as the place where they first encountered the great and legendary American bison.

South Dakota vs. the Other 49

Besides being a great place to go to fall in love with the beautiful landscapes on the western edge of the American Midwest, South Dakota is also a great state for agriculture.

According to census data, the “Blizzard State” ranks number 12 out of all fifty states in the total value of agricultural products sold. On top of that, it’s up there among the top ten states for over 20 different agricultural commodities. In the category of “sheep, goats, wool, mohair, and milk,” South Dakota outstrips all but four states in total sales. It’s also among the top 6 states for total acres of corn and wheat.

This great state has approximately 31,000 farms, and the total South Dakota farmland covers over 43 million acres. The majority of these farms are family owned and operated, and reportedly over 2 thousand of these family farms “have been in the same family for more than 100 years.” Even though these South Dakota farmers may seem rather removed from the rest of the world in their overly rural part of the globe, each producer in the state provides enough food to feed over 150 people every year. This isn’t only American consumers; it includes international consumers as well.

With agriculture being South Dakota’s top industry, it’s no surprise that the state’s production of ag commodities rakes in some big numbers. The industry contributes over $10 billion to the state’s economy every year.

The corn crop alone pays for a big chunk of this number. As the SDSU Extension Service iGrow says on their website, “Nearly one out of every three dollars generated by South Dakota agriculture starts in a corn field…. It’s the most planted crop in South Dakota.” Corn is so big in the state that they have the world’s only “corn palace.” The exterior of this event facility is decorated completely with corn and other grains.

Corn may be a big deal in SoDak, but the real game-changer for South Dakota agriculture is in livestock. Corn and feed crops are only their third and fourth biggest ag products. “Meat animals” and “Cattle and calves” surpass their big crops as the state’s top two ag products. According to iGrow, South Dakota has “3.7 million head of cattle.” This becomes an even bigger deal when you hear that each beef cow has an “annual economic impact” of $1,700. Way to go, South Dakota beef farmers.

Another notable product in the state is South Dakota wheat. The state ranks in the top six states for wheat production and in the top eight for specifically winter wheat. In another big cash crop, soybeans, the state ranks number 8.

Even in the commodities that don’t hit the high numbers, “The Land of Infinite Variety” still stands out in national agriculture. For instance, even though the state is closer to the bottom in production of potatoes, they’re still one of the only states to host mashed potato wrestling contests. Just check out this website for Clark County, SD, the location of the “world famous” wrestling matches. Talk about “infinite variety,” hey?

What else do you know about South Dakota agriculture? If there’s something we missed, tell us about it in the comments below. We’d love to hear more awesome facts about the state’s ag industry.