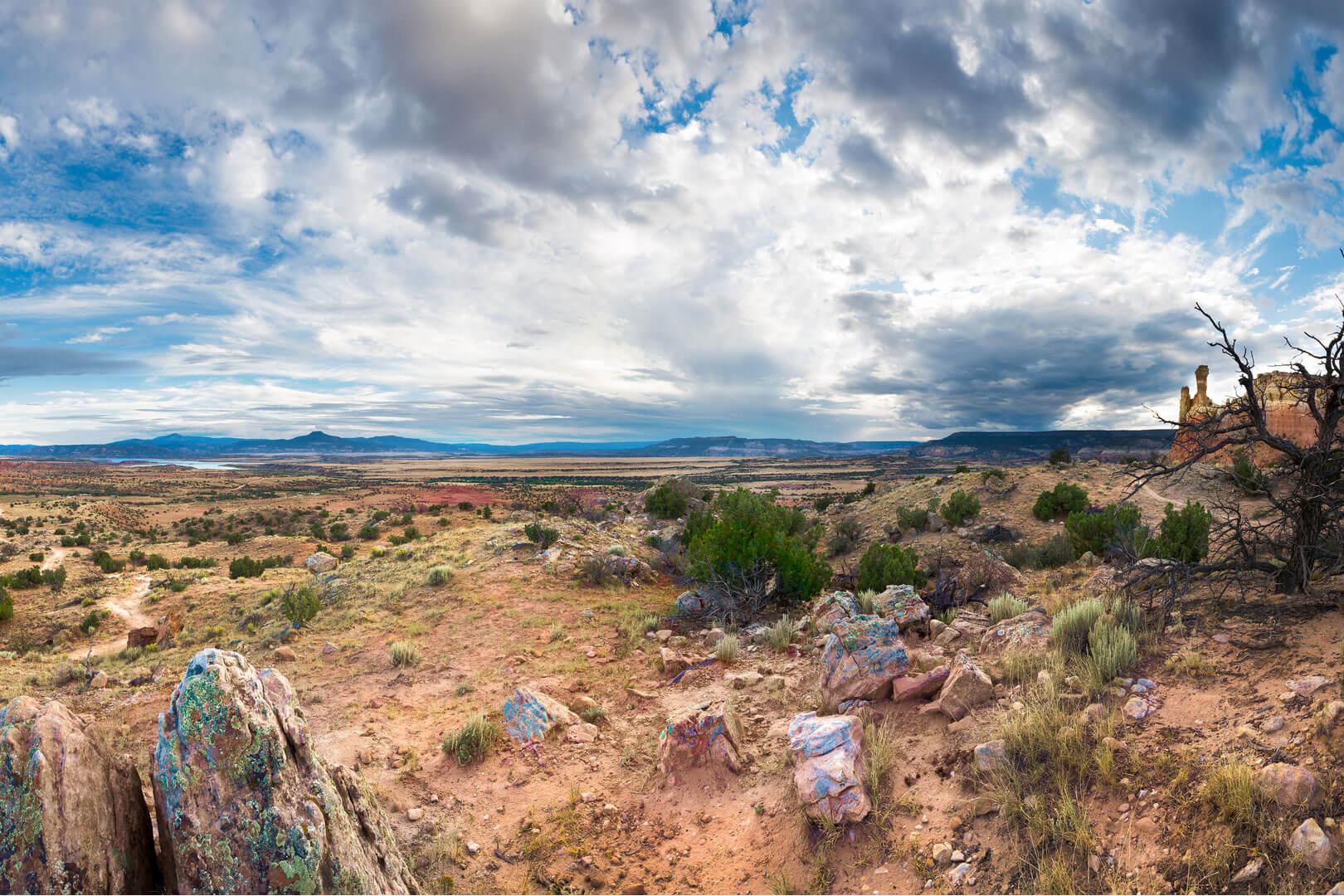 By Exhibit Farm
Sep 02, 2019
in Facts and Numbers,State Ag Spotlight

It’s time for another state ag spotlight! Last time, as you’ll recall, we profiled the amazing state of Iowa. Today, we’ll venture out away from the Great Plains and head a little bit this way. . .a little bit that way. . .well, basically south and west until we get to the sunny skies and open ranges of New Mexico. There’s lots to discover here about livestock, pecans, and, of course, chile peppers.

First, though, some quick facts about this gorgeous state. The U.S. annexed it as a territory in 1848, but it had to wait all the way to 1912 to become state #47. Ag production is the third-largest contributor to the state’s economy, generating no less than $4.26 billion in 2012.

From greatest to least, here’s the rundown of the top New Mexico ag commodities: dairy, cattle/calves, pecans, hay, onions, and chile peppers. Now, let’s zoom in a bit and take a look at a few of those, starting with the most iconically New Mexican crop.

Even if chiles are only #6 on New Mexico’s list of top crops, don’t think they’re not a major commodity. This state is the foremost chile grower in the country, which would explain why New Mexico’s state vegetable is chiles and pinto beans. (They go together so often in recipes that they just had to be honored together.)

Pinto beans are native to New Mexico, but chiles were brought from Mexico proper by Spanish settlers. Once they arrived, chiles took to New Mexico like a chip to salsa, because New Mexico’s hot, dry climate is uniquely suited to growing them.

In 2017, there were 8,100 acres of chiles, which produced 62,700 tons of peppers for a value of $44.6 million. That’s a lot of big numbers! No wonder the official state question is “Red or green?,” often heard in restaurants as waitresses inquire which color of chile diners would prefer.

If all that talk about chile peppers makes things too spicy for you, you can always reach for a glass of milk to cool things down. New Mexico can help you there, too. Dairy products are its number-one ag commodity, and at approximately 600 million pounds of milk per month, it’s just within the top ten milk producers in the U.S. (#9, to be precise).

This state is second in the nation for milk-production-to-cow ratio, and 98% of its herds have 100 or more cows. Even with all that, New Mexico only produces about 3% of the U. S.’ total milk, which just goes to show how dominant California, Wisconsin, and the other frontrunners are.

If we consider other products that come from the four-legged, slow-moving ruminants of the Bovinae family, you’ll find that New Mexico is home to about 1.58 million cattle and calves. They’ve had a while to build up their herds, to be fair. Cattle arrived all the way back in 1598, with Spanish settlers. Cattle are so important to New Mexican agriculture (the number-two commodity, after all), that blue grama grass, “the most valuable forage grass in the state for cattle,” is also the official state grass.

The last commodity we’ll highlight might surprise you: pecans. What? The quintessentially Southern nut? Yep, it grows in New Mexico too. New Mexico is usually stuck in second place, but in 2018 it vaulted into first, leading the nation in pecan production. The reason, unfortunately, was only partly due to New Mexico’s strong pecan production; New Mexico took first largely because much of Georgia’s crop was destroyed by Hurricane Michael.

Still, there’s no denying that New Mexico produced 90 million pounds of pecans last year, which is nothing to sneeze at. And even in its usual place as the first runner-up, it still produces about 20% of the U.S.’ pecans.

As you can tell, we love to talk about agriculture across America. It wouldn’t be fair to keep all the fun to ourselves, though. So now it’s your turn! What do you know about New Mexico’s ag industry? Tell us about it in the comments!