By Exhibit Farm
Jul 08, 2019
in Facts and Numbers,State Ag Spotlight

Welcome back to our State Ag Spotlight series! If you’re a longtime follower of Exhibit Farm, you’ll know that once upon a time, we profiled a different state’s agriculture industry each month. We’ve taken a break from this series for a while, but there are a lot more states that deserve some love when it comes to highlighting their contributions to America’s agriculture. 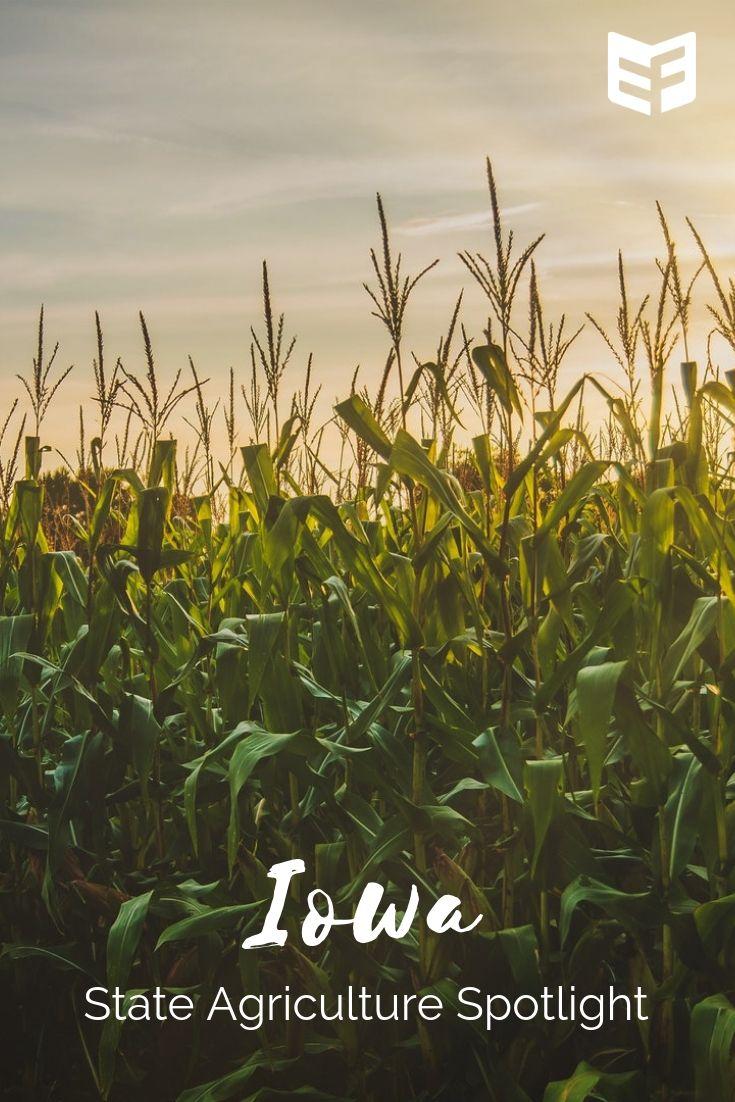 Last time, we talked about the Bluegrass State of Kentucky. This month, we’ll be heading over to Iowa to learn about pigs, beef, and corn. (Mmm, sounds like the makings of a good summer cookout.)

First, though, some quick facts about the state itself. Iowa became a state in 1846, taking its name from a local river (which was itself named for a Native American tribe). Rivers make Iowa distinctive in ways besides giving it a name: this state is the only one to have rivers as its western and eastern borders (the Missouri and Mississippi Rivers, respectively).

Iowa honors the wild rose as its state flower and the oak as its state tree. Both plants are abundant throughout the state; in fact, as State Symbols USA reports, “It’s difficult to find a tract of natural woodland in Iowa that [doesn’t] have at least one species of oak tree.” There’s even an unofficial state soil: Tama soil, which is found in 26 of Iowa’s counties.

As its designation of a state soil might suggest, Iowa has some amazing farmland.  It’s second in the nation for the value of its agricultural production, which, in 2013, meant that it exported $10 billion worth of ag products.  Yep, that’s “billion” with a “b.” In order to create that kind of output, Iowans devote over 90% of their land to agriculture.  That translates into 30.5 million acres of farmland, and makes Iowa the #3 state in terms of total number of farms.  No wonder it can produce so much, right?

And what specifically does Iowa produce, you ask? Well, as we mentioned, hogs and other livestock make up a lot of it. In fact, those are the top two commodities Iowa produces. Iowans lead the nation in terms of hogs raised — they’re the proud producers of about 50 million pigs per year.  That’s almost one-third of the entire U.S. supply of hogs, all in one state!  Think how much bacon, ham, and pulled pork that adds up to. . .

If you can tear your mind away from that delicious thought, we should point out that Iowa’s beef industry is pretty sizable too. Iowa ranks eighth among the states when it comes to cattle-to-people ratio. There’s 1.2 cows for every Iowan, or about 700,000 more cows than people. All those cattle means that the beef industry contributes several billion dollars to the state economy and supplies over 33,000 jobs directly or indirectly related to cattle raising.

Grain on the Plains

As amazing as all that meat production is, it’s far from the end of Iowa’s powerful agricultural performance. The state excels in field crops, too, ranking second in the country in soybean production (just behind Illinois). There’s no second place when it comes to corn, though. That’s right — Iowa produces the most corn of any state. 2.7 billion bushels in 2016-2017, to be exact. There’s that “billion” with a “b” again. South Dakota may have the Corn Palace, but it’s Iowa that tops the charts in production.

Unfortunately for our dreams of a summer cookout, the vast majority of Iowa’s corn isn’t sweet corn (the kind people eat). It gets used for other good stuff instead, like livestock food (contributing to all that pork and beef) and the ethanol that goes into gasoline.  In fact, Iowa corn produces 30% of America’s ethanol.

And if that wasn’t enough, one exceptional Iowa farm singlehandedly grows about 34,000 pounds of peas a year, which get sent to grocery stores all across the country. Just consider that the next time you’re standing in the frozen food aisle.

There’s a lot more to say about Iowa’s agriculture, but we’re going to hand it off to you now.  What did we miss about this outstanding state’s ag industry? Tell us in the comments; we’d love to know more!