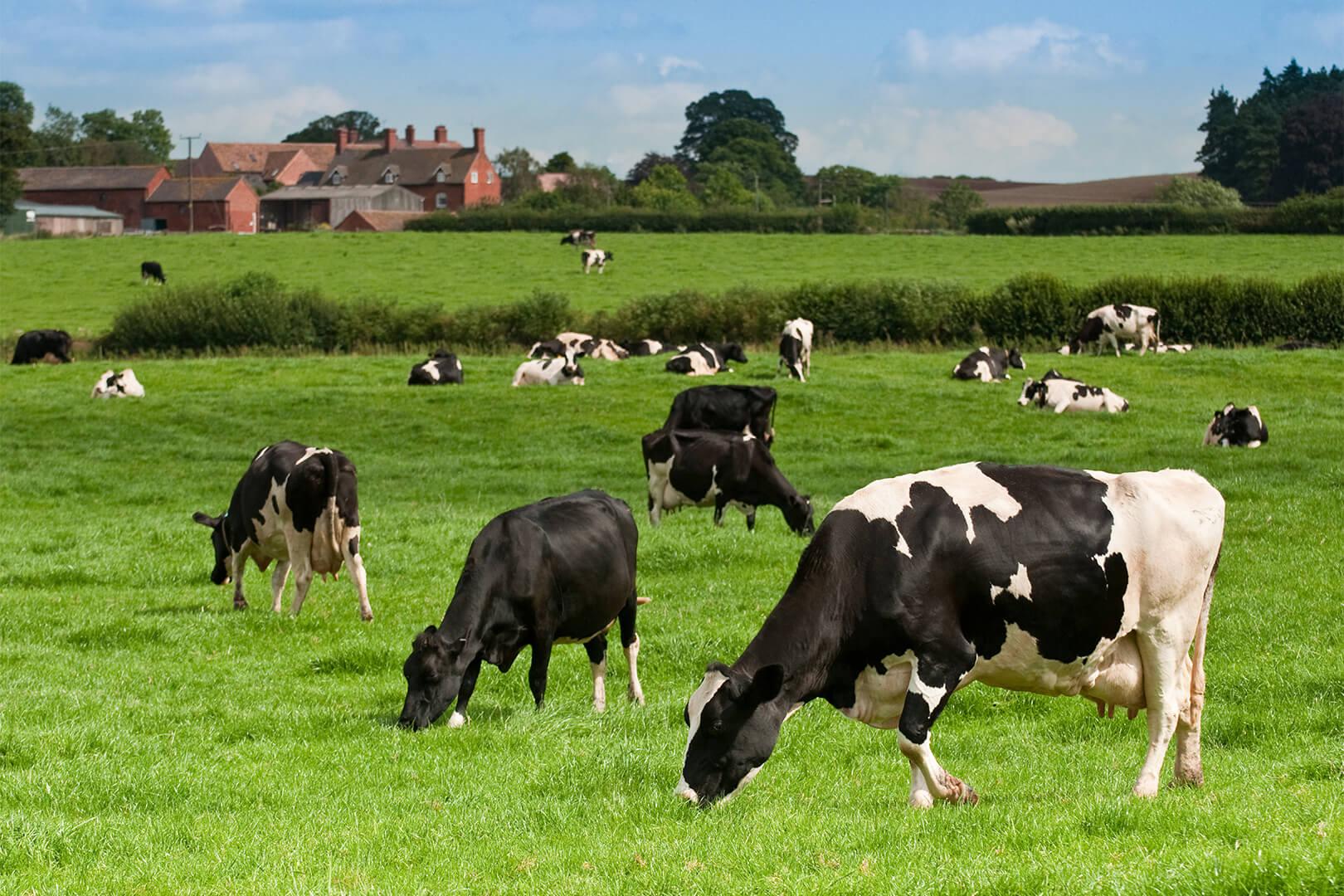 Remember back in February, when we talked about raw milk? This month’s topic also has to do with dairy. We’ll look at the issue of grass-fed vs. grain-fed products, which can include both milk and meat.

Is grass-fed milk (or beef) really better than grain-fed, as people often say? There’s several different ways to answer that question, depending on what you mean by “better.” As always, we’ll be focusing on the most concrete scientific data we could find. So get ready to dive into some nitty-gritty details about fats, micronutrients, and more.

The Basics of the Grass-fed vs. Grain-fed Debate

First of all, what does “grass-fed” mean?  “Grass-fed” refers to livestock (usually cattle) whose diet is 100% grass or hay. “Grain-fed” cows receive about 53% “forage-based feeds” (like grass) and about 47% “grains and concentrates.” To be more precise, all cows eat grass in the early part of their lives. The difference is that grain-fed cows’ diets include grain for a few months before they’re processed (to help them grow more). Grass-fed cows just continue eating grass or hay.

Most discussions about grass-fed vs. grain-fed beef revolve around comparing micronutrients. In particular, people often focus on a micronutrient called omega-3 fatty acids, or omega-3s.  Omega-3s (and their cousin, omega-6s) are a specific type of fat that the human body can’t produce on its own, unlike most fats. Because omega-3s seem to benefit your heart, they’re also a type of fat nutritionists encourage people to eat.

Products from animals who eat more grassy plants than grains have higher ratios of omega-3 to omega-6 fats than products from animals who eat more grains. Ratios like this often get called healthier than ratios with more omega-6s than omega-3s. Some evidence suggests, though, that this ratio isn’t as impactful as people used to think. In fact, Harvard says there’s evidence that both omega-3s and omega-6s are good for your heart.

A high omega-3 content is also one of the main selling points for grass-fed milk. But, according to one food-science professor, “relying on dairy products for omega-3s may not be the most efficient way to get the recommended intake.” Other foods, like fish, are far higher in omega-3s. That said, Americans currently eat about half the recommended amount of fish, so perhaps any source of omega-3s is helpful.

Grass-fed beef has less overall fat and more omega-3s than grain-fed — up to three times more. At the same time, grain-fed has a lower amount of saturated and trans fats than grass-fed. Grain-fed also has higher amounts of oleic acid, another beneficial micronutrient linked to healthy cholesterol levels.

Let’s look at some specific numbers. An article in the Washington Post quotes USDA data showing that a 100-gram serving of grass-fed beef has 65 mg of omega-3s, which is 22 mg more than the same amount of grain-fed beef. A 50% increase in omega-3s is certainly impressive. But, USDA data also shows that a serving of tilapia fish has 134 mg of omega-3s (a 100% increase over the grass-fed beef) and far less overall fat than either kind of beef does. For perspective, guidelines on how many omega-3s people should eat range from 300 to 1000 mg a day.

Overall, the academic sources we found were more ambivalent towards grass-fed products than you might expect. The Washington Post quoted a nutrition professor from Tufts University who said grass-fed beef isn’t a good source of omega-3s compared to other options. A researcher at Texas A&M similarly concluded that there isn’t evidence grass-fed meat is much better than grain-fed. Or, in the words of research-based website Healthline, “there’s no compelling evidence [that grass-fed] is significantly healthier than grain-fed in the context of a balanced diet” because “even conventional grain-fed beef is very healthy.”

One other point: concern for cattle’s welfare sometimes leads people to choose grass-fed products, because grain-fed cattle are sometimes kept in overcrowded, unhealthy conditions. The Washington Post’s Tamar Haspel touched on this issue too and concluded you can actually have good grain-feeding operations (with properly-drained feedlots and a good mix of grain vs. roughage) and bad grass-feeding operations (with insufficiently-sheltered or poorly-managed pastures), as well as bad grain-feeding and good grass-feeding ones. The difference is “in the management” rather than the feeding style itself, she argued.

So there you have it. Some facts and figures to guide you in deciding how you’ll eat, or to boost your consumer education efforts. As always, though, don’t simply take our word for it. Feel free to check our sources and do some digging of your own. Hopefully, you have a better idea now of what the specific issues in the grass-fed vs. grain-fed debate are and what information to look for.

We specialize in creating educational tools for the ag industry, not providing dietary or nutrition advice. Thus, don’t take this article as medical guidance — it’s for informational purposes only. If you’re thinking about changing your diet, check with your doctor or another medical professional first. And although we worked hard to find reliable information, it may have omissions, errors, or simple mistakes. So, if you rely on the information in this article, be aware that you’re doing so at your own risk.