By Exhibit Farm
Feb 19, 2018
in From the Display,Misconceptions

From the Display: How to Make a GMO

Over the past couple months, we’ve been looking closely at the content of one of our favorite displays—the GMO display. Using this hands-on element, we help ag groups explain genetic engineering to consumers and spread the truth about GMOs. In the last two posts of our “From the Display” series, we covered some of the myths that the display debunks about genetically modified organisms. We also examined the human and environmental health benefits of GMOs. This time, we’re going to dive inside of the DNA of GMOs to learn how scientists make these seemingly mysterious organisms. 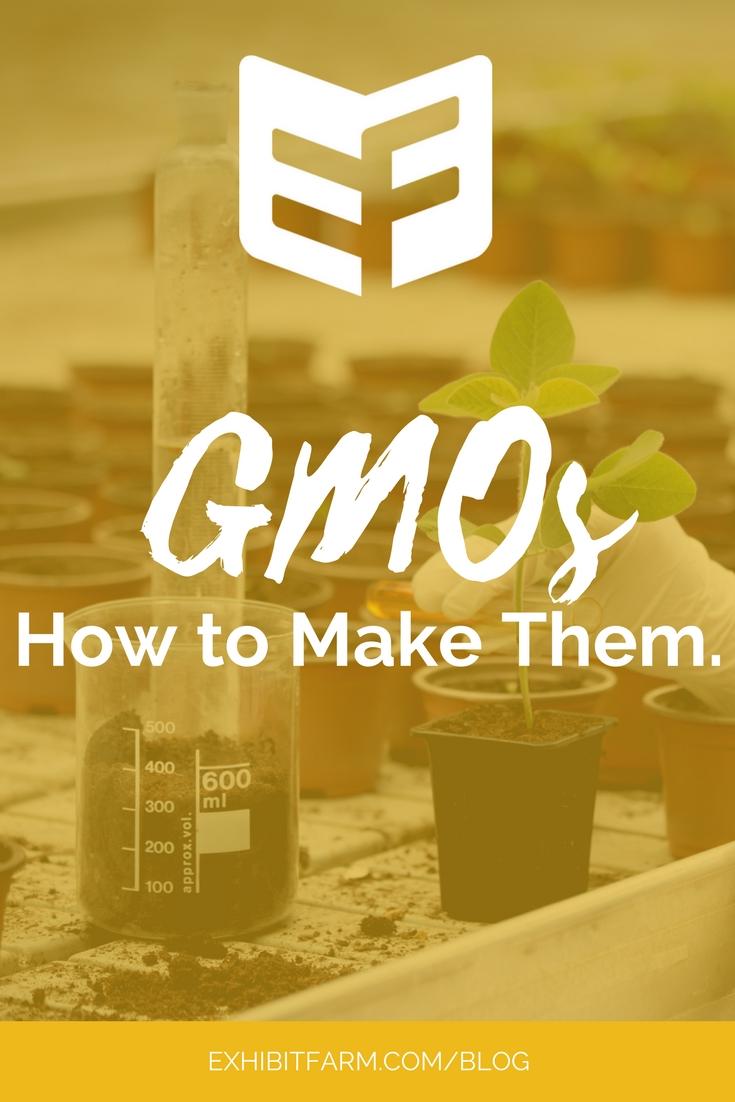 Before we dive into the specific steps of how to make a GMO, let’s get a historical perspective on genetic modification.

As we’ve mentioned in previous posts on this blog, genetic modification is far from new. Farmers have actually used plenty of methods to modify the traits of plants over the years. In one of these methods, farmers selectively breed certain plants to promote desirable traits in the species. Modification techniques such as selective breeding may appear “natural,” but the fact is that these techniques are still genetic modification. Selective breeding still involves humans manipulating the genetic makeup of a plant. It’s just that this manipulation is less hands-on and leaves a lot to chance. As a result, this process is very inefficient, as are many of the other older modification techniques.

The late 20th century ushered in a new and more efficient process for modifying genes known as genetic engineering. Through this process, scientists can directly edit the particular gene that they want to change without altering additional genetic information. They no longer have to leave the integration of the particular trait they want up to chance. Beyond that, though, it also lets them introduce genes from other organisms into plants to produce new desirable traits.

You’re probably wondering how this works. Let’s break down the steps together.

Step One: Select a trait.

The specific traits we see in plants, animals, and humans are determined by genes. Genes are sequences of DNA, a type of molecule, within the nuclei of the organism’s cells. The DNA sequences give a cell the information it needs to make a certain protein. And it’s these proteins, subsequently, that implement the specific capabilities and characteristics of an organism.

So, to begin the process of making a GMO, a scientist has to first determine what DNA sequence leads to the capability or characteristic that he wants to replicate. It’s kind of like looking at a cooking recipe to find out what part of the recipe gives the dish the specific element of flavor that you want to replicate in another dish. Or, as YouTuber Nick Saik explains in this video, it’s like selecting the portion of a Lego instruction manual that helps you create the element you want to build into a different Lego set. For folks who want to edit plants, this search for the right DNA sequence involves looking at other plants and even other types of organisms that have the trait they want to put into the organism they’re editing.

Once you’ve selected the portion of the DNA instruction manual that you want to put into a different organism, the next step is to cut and paste. Simply (or maybe not-so-simply) take the DNA segment that codes for the proteins you want and snip it from the DNA strands of the organism that has your desired trait. Now that it’s isolated from its original organism, you can stick that strand segment into the DNA of the organism you’re editing. If all went well, you should now have an organism with some new DNA instructions. These instructions will result in the formation of certain proteins that will lead to new biological traits on plant once it grows.

When editing the genes of plants, scientists often insert the new DNA by using a gene gun. With this gun of sorts, they fire the gene into the seed of the plant they’re editing. This method isn’t super accurate, though. So another method they use involves allowing a soil bacterium to carry the new gene into the seed. As you can tell, this version of “pasting” is more complicated than just applying a small dollop of glue.

After the cut-and-paste process is complete, you now have a seed containing a new segment of DNA that should code for the trait you want. To find out for certain if your engineering worked, the next step is to plant the seed. The plant that grows should have the new characteristic or capability that you were hoping to replicate. It’s also a good idea to make sure your new variety can also reproduce plants that also have that desirable trait. If the trait doesn’t show up in the new plant, though, you’ll have to return to the DNA to figure out what you need to change in the plant’s genome to get the trait you want.

Now this all probably sounds a little bit far-fetched. There’s no way that actually works, right? Well, it actually does. And it’s been done before to great success. An example of this is when scientists wanted to make a new kind of rice. They found a particular gene in a variety of maize that codes for high levels of Vitamin A. By inserting this gene into the genetic information of rice seeds, they were able to produce rice plants that, like the maize plants, have higher Vitamin A levels. This new variety of Vitamin A rich rice (also known as “Golden Rice”) has helped feed impoverished and nutrient-deficient communities.

For more information on this incredibly high-tech form of genetic modification, check out the following sources that we referred to in order to write this article. Some of them offer even more scientifically detailed explanations, for those of you who are interested in delving deeper into this interesting subject.

GMO Answers: “How GMOs are Made”

Harvard University’s Science in the News: “How to Make a GMO”

Popular Science: “How to Genetically Modify a Seed, Step by Step”

Dow AgroSciences: “How are GMOs Made?”