By Exhibit Farm
Dec 18, 2017
in From the Display,Misconceptions

From the Display: The Facts about GMOs

Just a few weeks ago, a Michigan county farm bureau brought a brand new Exhibit Farm display to the Michigan Farm Bureau State Annual Meeting in Grand Rapids, MI. This display, featuring crisp graphics and interactive elements, teaches the facts about GMOs. It also outlines the process behind genetic modification. With the digestible information and added visuals, visitors can get an idea of how genetic engineering actually works. Here, we’ll dig deeper into some of the facts about GMOs provided in the display. 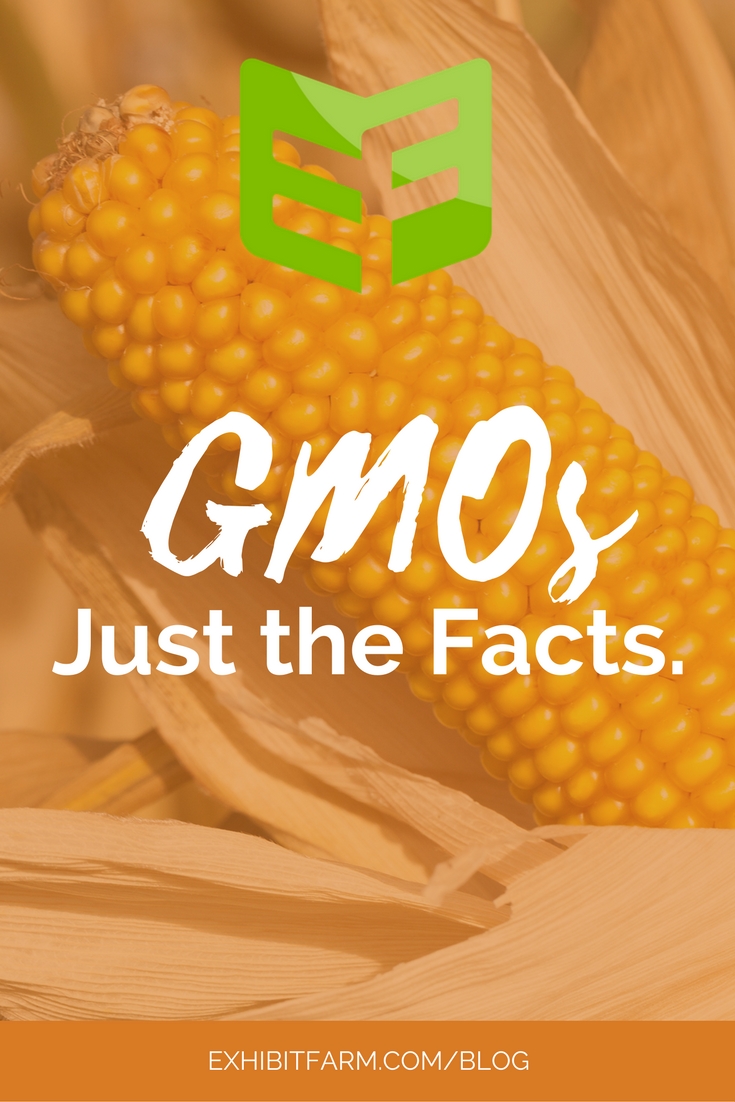 Ages before GMO technology even existed, humans were already messing with the genes of plants and animals. Through improvement techniques such as selective breeding and cross-breeding, farmers would modify plant and animal varieties to maximize on their most desirable traits. We even come across selective breeding in the biblical account of Israelite forefather Jacob, who used breeding techniques to increase his own sheep herd.

In a nutshell, genetic modification is far from new. Today, your dinner table probably doesn’t have a single thing on it that has not been altered by human farming practices. Selective breeding and cross-breeding over many generations have altered plants, giving them the specific traits they have today.

By the late 1900s, scientists developed a new form of genetic modification. It involved direct editing of genes, which meant it wasn’t open to all of the randomization of ancient breeding techniques. Today, with the precision of genetic engineering technology, scientists can modify specific traits within plants. That way, they can get just the results they want.

We’re Careful with Our GMOs

According to The Food Dialogues, a website of the U.S. Farmers & Ranches Alliance, “Each GM seed variety takes an average of $136 million and 13 years to bring to market due to research, safety studies and regulatory approval processes.” GM seeds are the only types of seeds that go through such an “extensive approval process” before hitting the food supply. Seeds developed through other advanced methods don’t receive near as much scrutiny. Check out this article to read about the main tests that GMOs have to go through to be officially approved.

One of the tests that GMOs have to go through is the test for potential allergens. This test for allergens involves three different stages: the in vitro test, the silico test, and the digestion test. Thanks to these tests, researchers were able to keep one potentially allergenic soybean from entering the market. According to the article, “Researchers who tried to improve the nutritional quality of soybeans using a Brazil nut protein realized that they were working with an allergen and immediately stopped the work.” The article’s authors cite this situation as “strong evidence that scientific methods to prevent allergy-causing GMOs from reaching consumers are robust and work.”

If your only source of information about GMOs were the “non-GMO” labels you see in grocery stores, then it’d be easy for you to think that GMOs are taking over the food supply. The reality, however, is that only thirty genetically modified crops are used worldwide. And a mere ten of those are USDA approved and commercially available in the U. S. These include corn, soybeans, cotton, alfalfa, sugar beets, canola, squash/zucchini, papaya, potatoes, and apples. The so-called “arctic apple” is the newest addition to the GMO club.

Consumers, however, tend to think that lots more GMOs are present in our food. This is because packages containing foods that don’t even have a GMO counterpart all-to-often say “non-GMO.” Wheat, for instance, doesn’t have a GMO version available in the U. S. All the same, you’ll probably see a loaf with the “non-GMO” label. Same thing with orange juice. There aren’t any GMO oranges, but they still put the label on as a marketing strategy. Uninformed consumers who see this label are likely to choose brands with this label rather than alternative brands that don’t have it.

The worst, though, is when you see salt labeled as “non-GMO.” Don’t fall for it, friends. Salt is a mineral, not an organism. It doesn’t even have genes. Hence, no genetic modification is even possible.

Check back next month for our next “From the Display” post to learn more of the facts about GMOs.