By Exhibit Farm
Apr 17, 2018
in Facts and Numbers,State Ag Spotlight

Welcome back to our series on state agriculture! Our goal in these posts is to give you a few good reasons to celebrate the United States agricultural industry. And, since we have visitors from all 50 states in this fair nation, we’re going to try to cover as many as we can over the coming months. We want everyone to find a reason to take pride in their own state.

So, this month, let’s look out east to the Old Dominion, also known as Virginia, and give that state’s residents some reasons to brag on their own agricultural industry.

But first, as our habit is in these posts, let’s begin with some fun facts about the state in our spotlight. 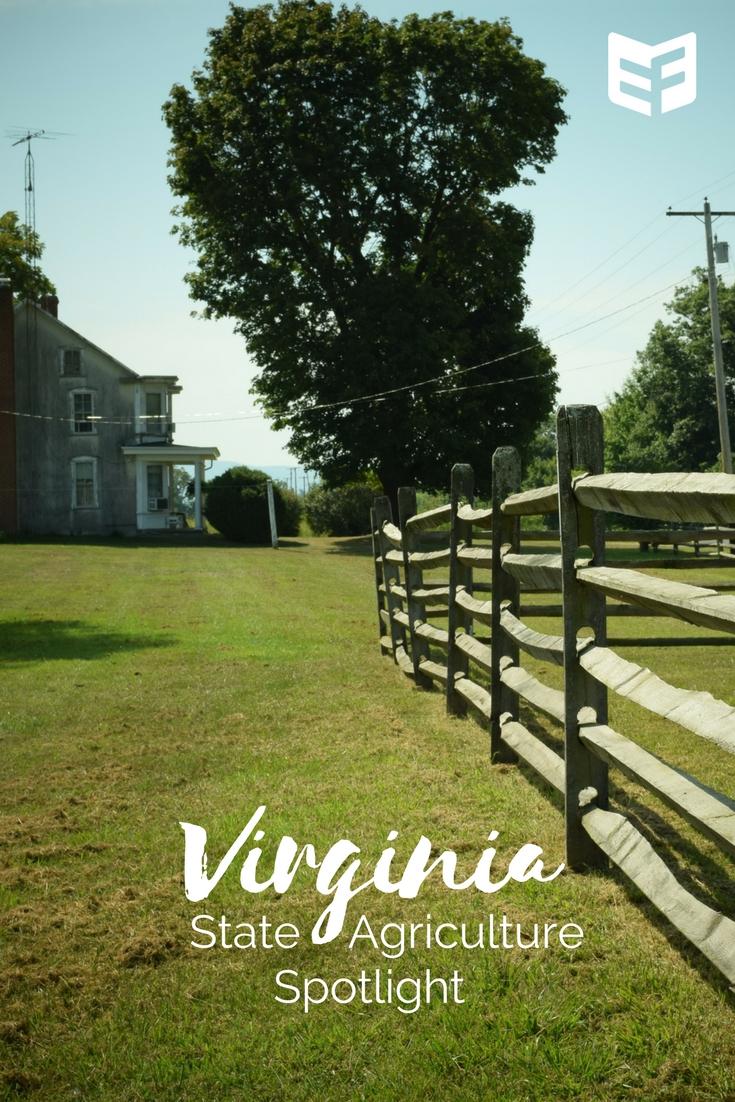 Virginia is one of those states where you don’t have to go far to get from the beach to the mountains. This not only makes it a fabulous place to live but also a rather convenient vacation destination. Not to mention that there’s lots of history in this drumstick-shaped state on the border of New England and the South. Its got more than its fair share of cool old towns and past presidents’ houses.

Nicknamed “Old Dominion” and “Mother of Presidents,” Virginia originally got its name in the 1600s, before it was a state. It was named for England’s virgin queen who reigned at that time, Elizabeth the First. Virginia apparently likes to go bold with its state memorabilia, having adopted the bold and brightly colored cardinal as its state bird and the phrase “Sic semper tyrannis” (translated from Latin as “Thus always to tyrants”) as its daring motto. The state’s tourist catchphrase, “Virginia is for lovers,” also has its share of boldness, as does the fact that the state flower actually grows on the state tree: the dogwood. Double dipping with your state plants? Now that’s really edgy, if you ask me.

Happy for the dairy industry, the state has also adopted milk as its state beverage. Which, come to think of it, gives us the perfect segue into the real purpose of this whole post: fun facts about Virginia state agriculture.

The reason why Virginians value their milk so much that they’ll establish it as their state beverage is because it truly has a pretty big economic impact on the state. In fact, Virginia dairy is the fourth biggest ag product in the state, producing about 1.7 billion pounds of milk a year that bring over $305 million into the state. This is all accomplished by about 90,000 dairy cows who live at Virginia’s 600-some dairy farms.

Milk isn’t the only winner in Virginia, though. Turkey and cattle surpass dairy products as the second and third most profitable ag commodities in the state. Broiler chickens outrank all three as the top agricultural product of Virginia.  These feathered friends, all 260+ million of them, make over $700 million for the state annually.

With such stats, Virginia may seem a bit animal heavy. And that’s true in some ways. The state really maximizes on its livestock and fowl. But the state still has stuff that grows in rows there. In fact, soybeans, corn, and hay follow dairy products as the fifth, sixth, and seventh most influential crops in the state.

That being said, Virginia’s national fame in the realm of agriculture doesn’t really come from any of these products, with the exception of turkeys. In fact, when it comes to national turkey production, Virginia ranks in the top six states, following competitive states like Minnesota and North Carolina.

The other products that make it stand out, though, aren’t among the state’s top money-makers. This speaks to Virginia’s agricultural diversity and the uniqueness of its crops. These outstanding crops include Christmas trees—for which Virginia ranks number seven nationally—and tobacco. With tobacco, in fact, the state ranks number four. That’s pretty far up there. Also notable is the number of horses, ponies, mules, burros, and donkeys within the state. According to the National Agricultural Statistics Service, the state has so many of these hoofed fellows that it’s among the top ten states for sales of these very critters.

All of these fun facts are true thanks to the 44,300 farms in the Old Dominion state. These thousands of farms cover over 8 million acres of farmland, contributing all the farm-grown goodies that make agriculture the top industry in the state. So give it up for Virginia farmers and everything Virginia grown! Without this state, we’d be living in a less well-fed world and a world with a lot fewer Christmas trees.

This is just the tip of the iceberg. You have a lot more to get excited about when it comes to Virginia agriculture. But this is all we have for you today.

So now, let me ask you: What do you know about Virginia agriculture? If there’s something we missed, tell us about it in the comments below. We’d love to hear more awesome facts about the state’s ag industry.