By Exhibit Farm
Jun 18, 2018
in Facts and Numbers,State Ag Spotlight 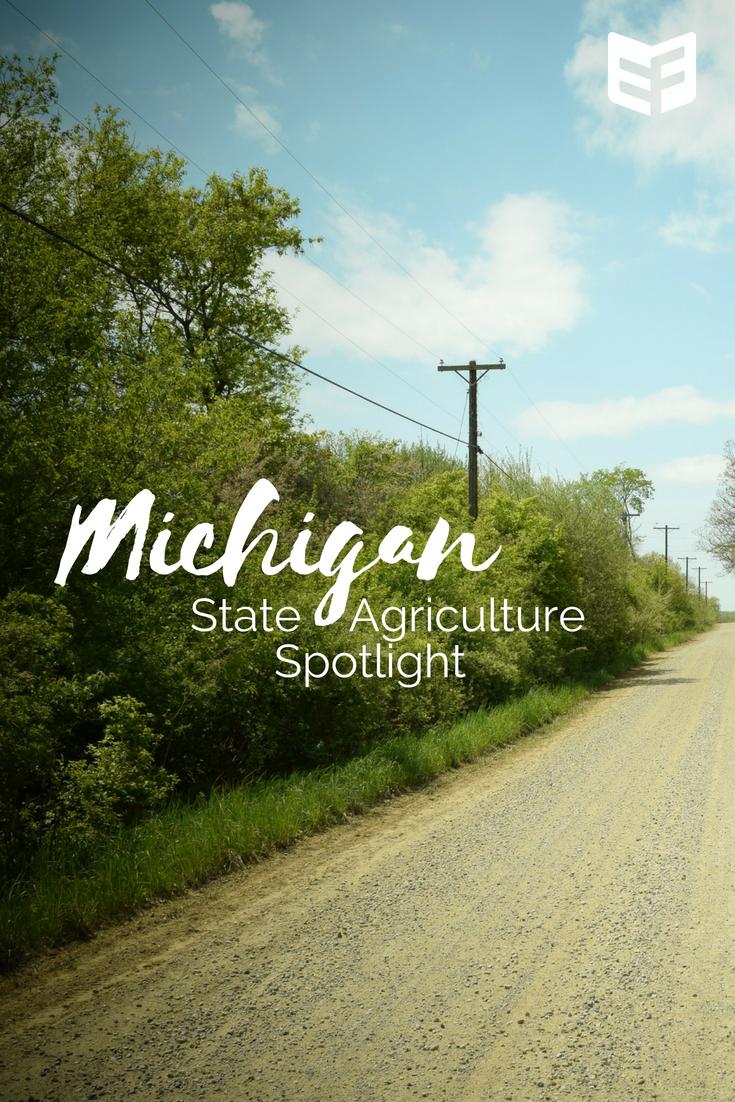 Welcome to the fifth installment of our state agriculture series! These posts are here to give you a reason to celebrate the agricultural accomplishments of the United States. They’re also here to remind you that every state plays a part in the country’s agricultural industry and that every farmer in each of those states does too. That makes them worth celebrating. So, today, we’re going to take a look at one of the great northern states, known to some as the beloved “home of the water, Canada’s daughter.” We want to give you a reason to celebrate Michigan farming along with us.

To start us off, let’s take a look at some fun facts about the state before diving into its agricultural industry.

Michigan. It’s the only state with a U.P. The only state that’s connected to all five of the Great Lakes. The only state that looks like a mitten. (Back off, Wisconsin.) One of the most hardcore places to live in the United States due to its long, snowy winters and the unpredictability of its generally wet weather.

It’s a place where there’s always the possibility of finding yourself driving in a snowstorm in May—but also one that steals your heart with lovely summers and enchanting freshwater beaches. On top of that, it has beautiful lightning storms and lovely rains with zero threat of hurricanes or earthquakes and only the occasional tornado. So, all in all, you’re kind of trading off the horrifying summer weather experienced by other, less fortunate states for an intense winter that, although cold, gives you the thrilling sensation that you live in a Russian wasteland. Not a bad trade, if you ask me.

The word “Michigan” comes from the Native American Chippewa word meaning “great water,” which fits pretty well with Michigan’s actual peninsular situation. Its proximity to the five Great Lakes also explains the nickname, “The Great Lakes State.” The other nickname, “The Wolverine State,” is a bit of a mystery since most Michiganders would tell you that they’ve never seen a wolverine. One Ohio-originated explanation for the nickname, however, implies that every Michigander has seen a wolverine—and several too! They just don’t know it.

Regardless, at least the people stuck with the peninsula theme when they chose Michigan’s motto. When translated from the Latin, the laughingly unpoetic statement reads, “If you seek a pleasant peninsula, look about you.” They’re definitely not wrong, though. If you ignore the rain and the cold of winter, Michigan is pleasant. Its lakes and forests make it beautiful.

That class of less inclusive Midwesterners from the flyover states often insist that Michigan is not in the Midwest. Despite their unfair discrimination, however, Michigan has proven itself to be quite similar to the rest of them. In fact, all of the top ten corn producing states in the country are midwestern states, and all of these states list corn and soybeans among their top statewide ag products. North Dakota, another midwestern state, ranks number eleven and also lists corn and soybeans as top products.

Corn and soybeans, then, are obviously a midwestern thing. So, if that’s the case, why do those other states exclude Michigan? It ranks number twelve for corn production, after all. And, just like in those high-and-mighty midwestern states that I shall not name, corn and soybeans rank pretty high among Michigan’s ag products. These two crops actually rank second and third in the state. So please, dear flyover states: stop excluding poor Michigan! She’s just like the rest of you.

Despite the disputes over Michigan’s identity when it comes to the Midwest, there’s no doubt that it’s the king of the Great Lakes States. As a leading member of those states privileged by close proximity to the freshwater beauties, Michigan takes part in the bountiful dairy harvest common to the Great Lakes area. In fact, dairy is the Great Lakes State’s top agricultural product. It alone brings in somewhere around $1.6 billion annually in cash receipts. Now that’s nothing to moo at.

And neither is the fact that Michigan ranks number five in the nation for dairy production. Talk about the cream of the crop! Speaking of crops, Michigan is actually the second most agriculturally diverse state in the nation, coming in only after that agricultural powerhouse, California.

That would explain why Michigan is at the top in the production of several other crops besides dairy. Do you like asparagus or tart cherries? Out of all fifty states, Michigan earns the gold medal for production of these members of the produce family. In fact, the state produces a whopping 75% of the entire nation’s tart cherry supply. How about apples and blueberries? Well, Michigan ranks third in the nation in the production of both. Does your family get a live Christmas tree in December? Michigan is number three in the nation for the number of Christmas trees harvested. It also grows more cucumbers used for pickling than any other state.

As a whole, Michigan farmland stretches across 9.95 million acres. It’s divided among more than 50 thousand farms that average a size of 195 acres per farm. The oldest continuously running farm in the state is over 200 years old. Two brothers purchased the land from Potawatomi Indians in July 1776, two days after Congress adopted the Declaration of Independence. It’s been owned by the same family ever since.

Since we’re talking about history now, get this. Michigan houses a university that became one of the nation’s first-ever land-grant colleges and “the first institution of higher learning in the United States to teach scientific agriculture.” That’s Michigan State University.

I suppose I should add to all of these accomplishments that Michigan is also the home of that fabulous agricultural display company, Exhibit Farm. This fact alone makes it pretty darn special. But, to top that off, the state also has the most Corny Cornhole boards, the biggest Exhibit Farm project to date, and the most Exhibit Farm email subscribers. (You can become one too! Just fill out the form here.)

On that impressive note, I’ll leave you to consider the virtues of what some have called the best state in the Union. Be sure to thank a Michigan farmer this month, if you’re blessed to see one.

Now, though, let me ask you. What do you know about Michigan agriculture? If there’s something we missed, tell us about it. We’d love to hear more awesome facts about the state’s ag industry.