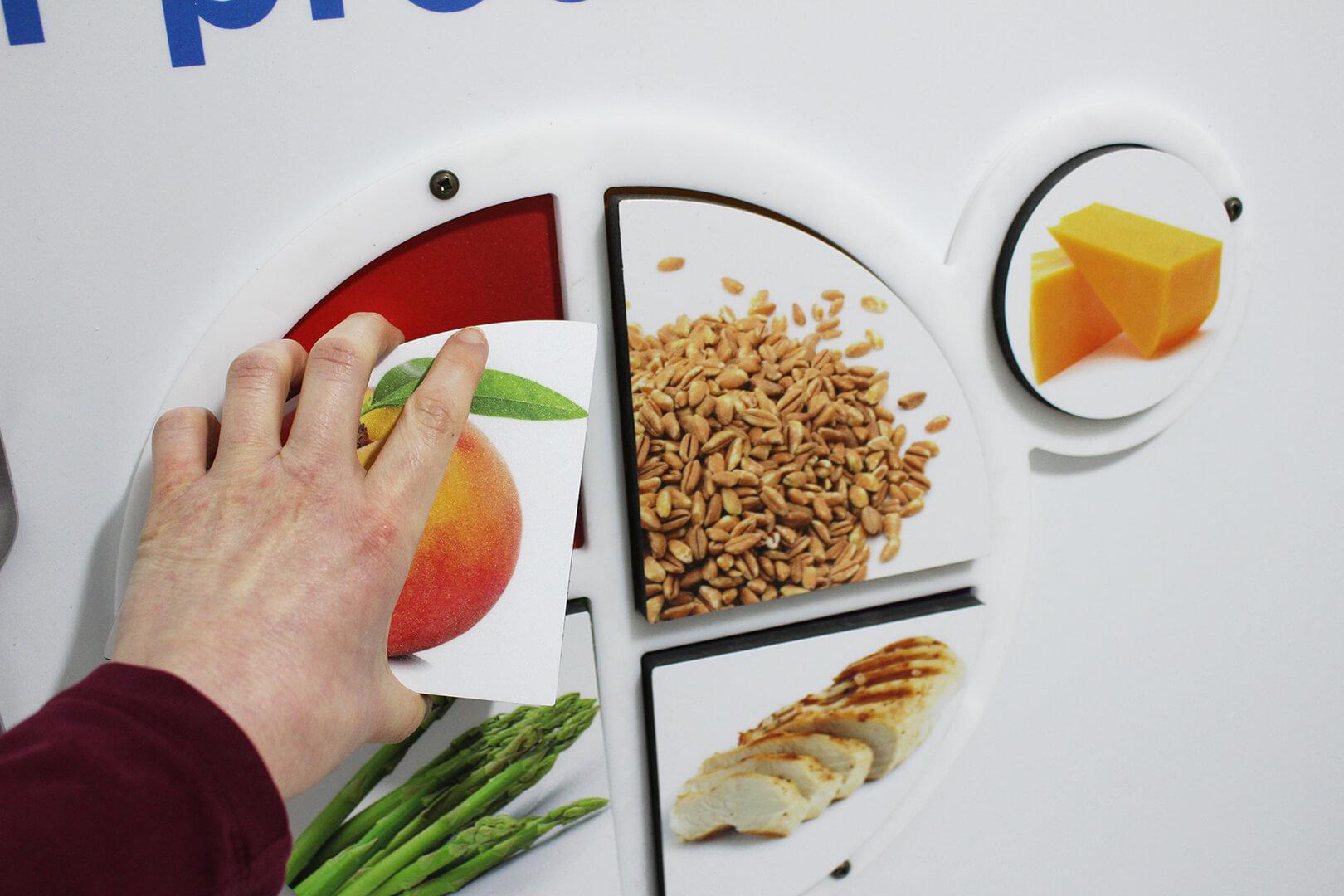 Mix, Match, and More: A Display about Locally-Grown Foods

If you’re educating consumers about their food, chances are you’ll talk about local agriculture at some point. Local food is an effective way to forge a connection between farmers and consumers, after all. But what if you got even more educational benefits? Well, “more” is exactly what this display about locally-grown foods gives you. It highlights local food and also another ag literacy topic.

But first we have to back up a bit. Show of hands: who remembers the Food Pyramid?

If you were around in the ’90s and early 2000s, you probably saw this diagram somewhere. Particularly popular in health/nutrition programs, science textbooks, and public health campaigns, the Food Pyramid represented the USDA’s current food group recommendations.

The USDA eventually replaced the Food Pyramid with the MyPlate diagram. Instead of a pyramid, MyPlate uses graphics of a plate divided into segments for each food group. It helps people visualize how much of each group they should eat.

So what do public health campaign graphics have to do with agriculture education? Well, one of our clients wanted a display with two functions. We worked with Macomb County Farm Bureau to design an exhibit trailer with several displays about farming and food. And Macomb County wanted to highlight nutrition in particular, among other aspects of food.

The display they had in mind would borrow MyPlate’s graphics, since many consumers already recognize that framework for nutrition. But they also wanted the display to include more than just nutrition information. Macomb County is in Michigan, America’s second-most agriculturally diverse state, so they wanted to honor the wide variety of locally-grown foods in their state.

Our designers decided that a mix-and-match approach was the best way to combine these two concepts. By simply making the plate graphic magnetic, we could even get the exhibit trailer’s vistors involved in building the display themselves.

The MyPlate graphic includes sections for fruits, vegetables, protein, grains, and dairy. Fortunately, Michigan produces many foods in all of those categories, so we could pick five locally-grown foods for each one. Some were no-brainers — Traverse City, MI is famous for its cherries, and Kalamazoo, MI is where commercial celery growing began in the US, so of course we had to include cherries and celery.

Other foods were less obvious. For example, consumers might not necessarily think of dry beans when they’re choosing a protein. But Michigan is the #2 state for dry bean production, so they found their way onto the display.

With the foods picked out, we created 25 large magnetic pieces with pictures of the foods on each. The pieces are sized to fit into the shapes of the magnetic MyPlate graphic, like a puzzle. Consumers can swap out their favorite foods to build an appealing, nutritious plate that spotlights locally-grown foods.

The nice thing about this display is that it’s easy to adapt to any location. A client in Virginia asked us to build one for them, and the customization process was as simple as substituting photos of foods like collard greens or peanuts. What locally-grown foods might you want to highlight on a display? The possibilities are as varied as your own region’s agricultural diversity.

(If you want still more, there’s extra photos of this display on its page in our portfolio.)