By Exhibit Farm
Mar 05, 2018
in Facts and Numbers,Food Holidays

I can hardly believe it’s March already. Supposedly February is a “short month.” But honestly. Two or three days really doesn’t make much of a difference, and I think it still would have been shocking for March to arrive already even if February had been a couple days longer.

Well, and here we are. So I may as well welcome you back to our Exhibit Farm series on national food holidays. This time, as you probably guessed, we’ll be looking at some of the special foodie holidays coming up in this unexpected month of March. Use this brief featurette of our top March snacks and foods as an excuse to thank the farmers that contribute to your daily meals. They’ve worked hard, and we want to spend some time celebrating the results of their diligence.

Just like last month, we’re not going to be able to include all of this month’s food holidays in the following paragraphs. Like all other months, March has more food holidays than it has days. To cover them all, this post would have to be excruciatingly long. Don’t worry, though. I’m not going to keep you here that long. We’ll just talk about the four foodie holidays that excite us the most.

To clarify before we begin, however, I just want to say that the foodie calendars we consulted while putting this post together had some inconsistencies. For instance, some sources call April “Fresh Celery Month” and March the less specific “Celery Month.”  (Makes me wonder: does that mean your celery has to be rotten in March?) However, in this case, we decided to stick with the first source we came across and are choosing to refer to March as “Fresh Celery Month.” Even if we happened to choose the wrong sources in the dates we cite here, hopefully the content is still educational for you, dear readers.

Nuff said. To start us off, let’s take a look at one of the month-long observances dedicated to March. 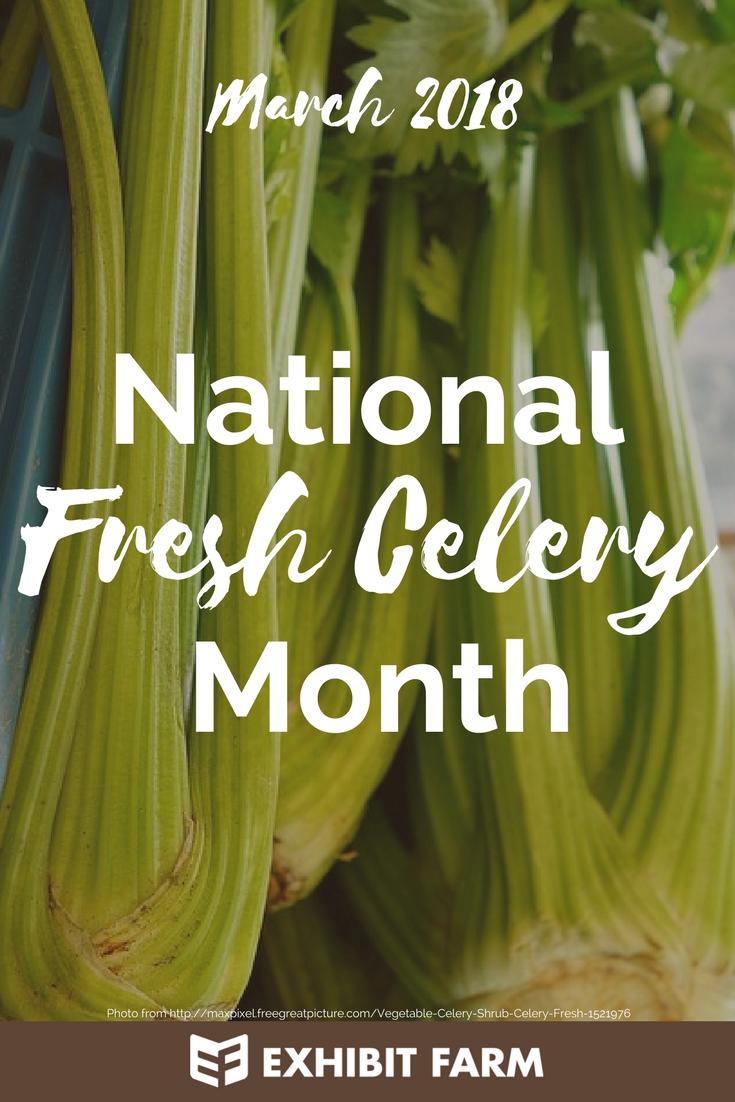 To all you ants-on-a-log fans out there, congratulations. You now have an excuse to eat your favorite snack every day for the rest of the month.

To the rest of you who aren’t as excited about this celery-bration (ha, see what I did there?), I’m going to give you several reasons to change your mind.

First of all, did you know that celery has a lot of health benefits? Although celery doesn’t meet the nutritional awesomeness of those health powerhouses known as “superfoods,” nutritionists still consider it an excellent food. It seems like a rather unassuming and bland part of nature, but celery has loads of essential vitamins and minerals. The crunchy stalks may also slow dementia and help contribute to decreased blood pressure and cholesterol. As the Agricultural Marketing Resource Center notes, it’s also good for your pearly whites, “being a natural fibrous tooth cleaner and containing compounds that act as surface cleansers.” On top of this, you can eat it while adding practically no calories to your diet. How cool is that?

Even before we knew all of these details about celery nutrition, humans still recognized its health benefits. In fact, celery didn’t appear at the dinner table until the 1600s. Before that, humans used it mainly for medicinal purposes.

Unfortunately, all of celery’s great benefits come with some tough prerequisites for growth. Even though it can grow in almost all fifty states, it’s harder to grow than most fruits and veggies since it needs more time to grow. It also needs cooler temps and lots of water. The states that best fit the bill for celery growth and produce the most celery in the nation are California and Michigan, the top two most agriculturally diverse states in the U.S. 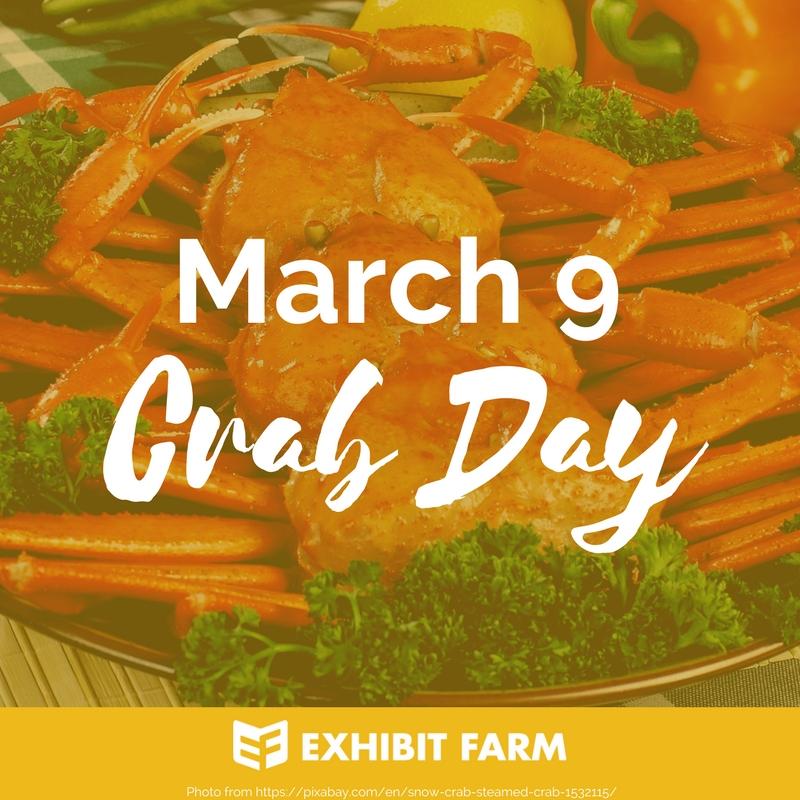 If you’re from a midwestern state like us, your experience with crab is probably distressingly limited. And there’s a good chance you’ve had some bad experiences with crab during your time in the world of seafood. If so, take heart. There is good crab out there. And—lemme tell you—it is a real treat. And, no, the good stuff doesn’t only exist in those crabmeat cheese puffs that you can’t stop eating at the local Asian cuisine.

The best places to go to get this good stuff are states with plenty of access to saltwater, such as Alaska, Louisiana, Washington, Virginia, and California. In fact, over 80% of all domestic U.S. seafood comes from these five states. This, quite naturally, includes crab, which ranks among the top ten most popular seafood products in the nation. Interestingly, however, we actually import a lot of the seafood eaten stateside from other countries. As this report points out, however, a good portion of imported seafood is actually “caught by american fishermen.” It just goes to other countries for processing before coming back to America to be eaten.

When it comes to crab in particular, the primary species caught in the United States are King, Snow, Dungeness, and Blue crab. Out of these four species, blue crab is the most popular and claims the most fisheries. Reportedly, blue crab shows up the most on the Atlantic coast and in the Gulf of Mexico. 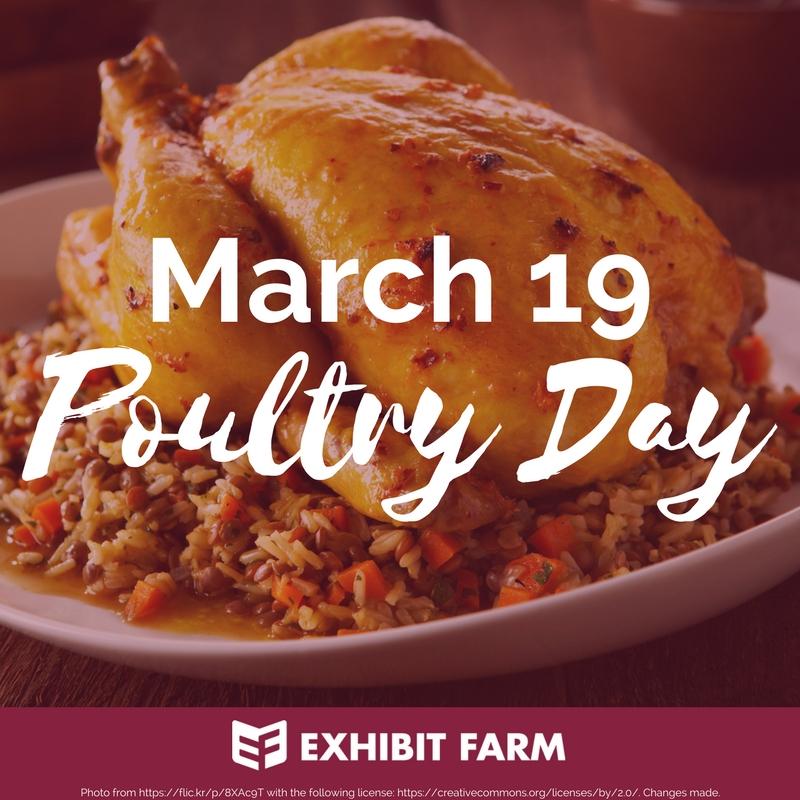 KFC fans, don’t you get too excited. This day isn’t all about your beloved chicken dinners. In fact, the term “poultry” encompasses many, many different types of domesticated fowl. This includes the obvious ones, like chickens, turkeys, ducks, and geese. And it also includes the less obvious ones, like pigeons, guinea fowl, quail, and—get this—ostriches and emus. (Don’t know what an emu is? Well, fun fact, they make a sound that resembles the low growl of a Jurassic Park dinosaur. Check this video out to hear it for yourself.) So take that, chicken dinner connoisseurs. You have to share your special day with folks that raise ostriches and emus too. And yes. People do eat ostrich and emu meat.

Thankfully for you chicken folks, there’s a lot of love to spread in this industry. In fact, the U.S. tops the charts worldwide for poultry production and comes second for poultry exports. We eat more poultry than beef or pork, and chicken is not just the top poultry in the U.S. but worldwide as well. To meet this high demand, the United States also produces more chickens than any other kind of bird. In fact, according to the National Chicken Council, “The chicken industry in the United States is one of the most successful sectors in agriculture.” The heavylifter in the U.S. chicken industry is a kind of chicken called the “broiler,” a chicken “raised specifically for its meat.” The top three broiler-producing states are Georgia, Alabama, and Arkansas.

Turkeys are the second most popular poultry type in the United States, although the numbers drop far below chickens. Minnesota’s and North Carolina’s high turkey production numbers in the past few years earn them the top marks in the turkey industry.

In other news, the ostrich and emu industry isn’t all that big here in the United States. In fact, according to the Agricultural Marketing Resource Center and the American Ostrich Association, “[T]here is no single, reliable, comprehensive source of information on production, prices and markets for ostrich products.” Not surprising, right? However, the 2012 Census of Agriculture tells us that there are still some ostrich farmers out there. Over 250 farms “raised 6,540 ostriches and marketed about 3,141” in that year. That’s actually a decline from what it was in 2007. In ostrich and emu production, Texas is the top state for both. But California, Kansas, and Florida all have a horse in the ostrich and emu race. (Maybe I should just say they have ostriches in the race. Pardon my confused metaphors.)

Last but certainly not least, the final day in March is dedicated to America’s favorite citrus fruits: oranges and lemons. As the Agricultural Marketing Research Center states, oranges and lemons are among the top three most important commercial citrus varieties in the United States.

Oranges are number one in the country for production and per capita consumption of citrus fruits. In 2014, oranges made up almost 60% of the U.S. citrus crop. Americans consumed an average of 9.4 pounds of fresh oranges that year per person. Meanwhile, they drank an additional 47.2 pounds of orange juice.

Lemons are the third most widely grown citrus fruit in the country. In recent years, the country has filled over 20 million boxes of lemons in a single year. Although the U.S. grows more grapefruit than it does lemons, the enchantingly sour yellow fruit ranks number two for all-around consumer demand. Consumers use them primarily in lemonade, in carbonated drinks, as a garnish, or as a cooking ingredient. Average per person consumption for lemons measured at over 7 pounds a couple years ago.

Citrus production in the U.S. depends mainly on four states: Florida, California, Texas, and Arizona. Citrus as a whole can thank Florida for over 50% of total production and California for around 40%. When it comes to oranges and lemons in particular, over 91% of lemons come from California. 66% of oranges come out of Florida. On top of this, the United States ranks among the top three countries for total, worldwide orange production. Not to mention that lots of lucky folks in California, Arizona, and such places get to enjoy the luxury of eating citrus from the trees in their backyards. And that stuff doesn’t even appear in these statistics. Impressive, huh?

For the rest of March’s food holidays, check out this comprehensive list at Foodimentary.com. Have a delicious and food-filled March!