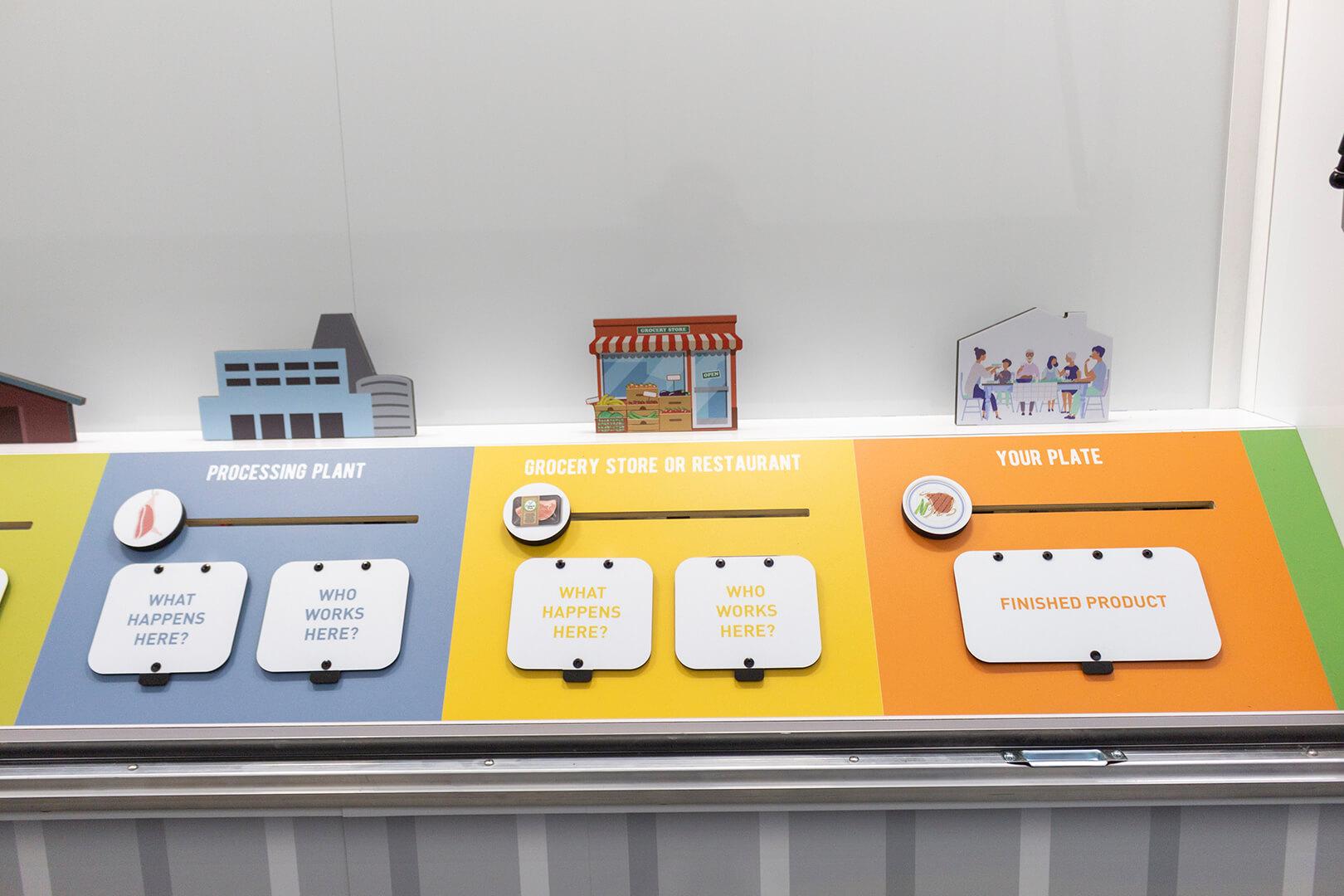 Demystifying the Food System: The Farm to Fork Exhibit

The exhibit features five small cutouts representing five steps in the journey food takes to your plate. Below the cutouts, a flip-up door reveals info about the workers involved in that step of the process. That way, consumers don’t just learn about abstract processes; they learn about all the people and all the careers involved in the seemingly-simple job of producing food.

The first stop is the farm, of course. That’s where all our food ultimately comes from — meat, vegetables, dairy, fungi, you name it. This section highlights the vital work farmers do. But it’s not just farmers; there’s a whole host of support industries that allow farmers to do what they do. So we highlight some of them in this section as well. Jobs like veterinarians, agronomists, and ag bankers all get a shout-out.

After that comes a section about food processing facilities. Now, “processed foods” have a bad connotation for most people, since we usually hear that phrase in the context of Twinkies, chips, and other unhealthy options. But that’s not all that food processing involves. Sure, potato chip factories fall under this category. But so do places like meatpacking facilities, which simply break down large cuts of meat into more manageable ones without changing the nutriousness of the meat at all.

So the food processing section talks mostly about these less-well-known types of food processing. Sandwich bread, chicken broth, peanut butter and jelly, breakfast cereal — all of it comes to us from these facilities. Even vegetables go through food processing. Someone has to group the carrots into bunches and put the frozen veggies in their freezer-safe bags, after all.

The first two panels represent the producer side of the equation. But the next stop represents a bridge between the producer and the consumer sides of the food system. At distribution facilities, large shipments of food get broken up into smaller shipments to individual grocery stores. Unless we’re talking about Costco or Sam’s Club, most grocery stores don’t want jumbo-size boxes of only one thing. So order selectors take grocery stores’ orders and repackage the food into the smaller quantities they’ve asked for. Then, truckers drive the pallets to each store.

The next station in the exhibit represents grocery stores. Everyone knows how those work! But again, we wanted to highlight some behind-the-scenes jobs that consumers might not think of immediately. So the text under the flip door mentions the fishmongers and butchers behind the fresh meat counter, the bakers who decorate cakes and make rolls or pastries, and so on.

And finally, we’ve reached the “fork” section of the farm-to-fork process: individual consumers and their meals. Here, we talk about the nutritionists who research different foods so doctors and public health organizations can make good recommendations. We also mention parents’ role in teaching their kids about nutritous, tasty food.

With supply chain problems getting more attention since the COVID-19 pandemic, we wanted to demystify the workings of the food system for consumers. And by breaking it all down into five parts, the Farm to Fork exhibit makes the process easy to understand and to remember. Pennsylvania Farm Bureau isn’t the first client we’ve made an exhibit like this for, and we’re betting they won’t be the last one, either.