By Exhibit Farm
Mar 19, 2018
in Facts and Numbers,From the Display

From the Display: The Wide World of Corn Facts

For this week’s installment in the “From the Display” series, we’ll be taking a closer look at Exhibit Farm’s most popular product. It just so happens to be the funnest and the quirkiest as well. And, well, the corniest. If you still don’t know what we’re talking about, you can find out here. 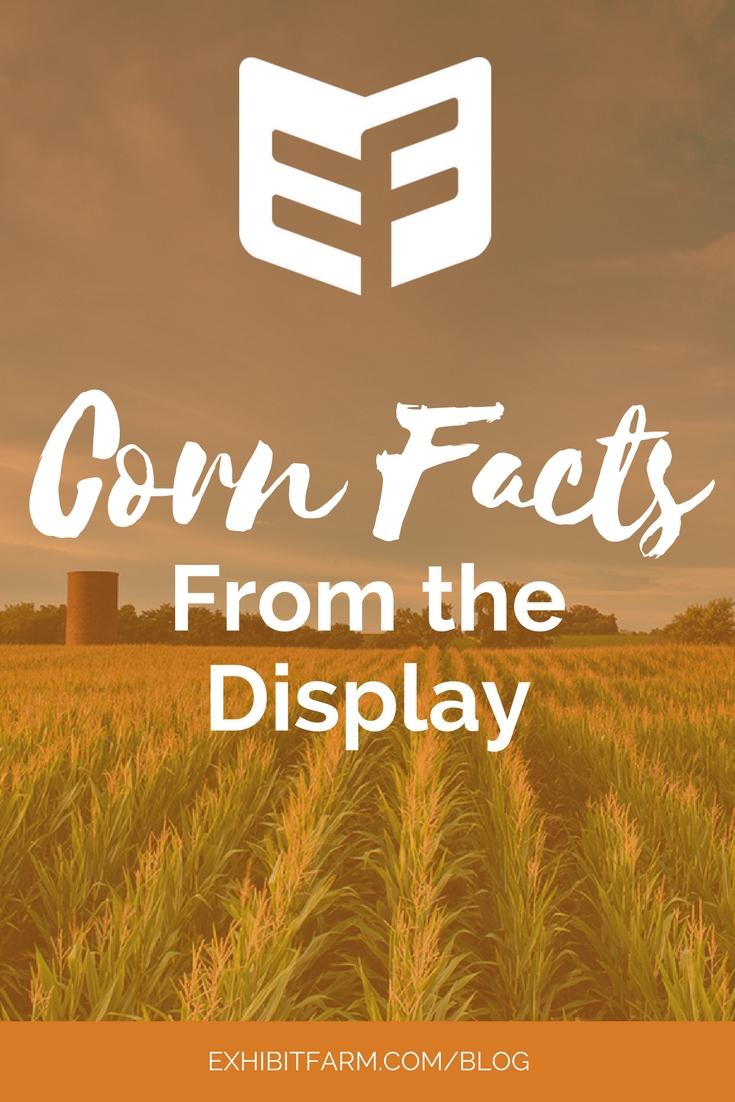 Since we’ve already covered the production process for this product in our behind the scenes series, we’re going to use this blog post to look closer at the content.

The nice part about this product is that it combines learning and play. Lean over to pick up a beanbag from your cornhole board, and you’ll immediately encounter a list of facts about the world of corn. This makes the corny cornhole set the perfect addition to a set-up at a fair or another consumer-oriented event. The facts it shares might be widely known among the ag community, but they’re things that the average consumer likely knows nothing about. By simply incorporating these corn facts into the activity of playing a game, you’ve made the facts accessible. Plus you’ve taken a step that, although small, may help a consumer feel more connected to the agricultural industry.

Let’s dig a little bit more into some of the corn facts that appear on these fun and colorful boards.

It takes more than 25 gallons of water to grow one ear of corn.

According to this source, growing a whole pound of corn takes about 127 gallons. Meanwhile, a whole acre needs 600,000 gallons of water, roughly.

This makes the nation the top corn producer in the world. China is the second highest producer, rolling out a little over 20% of the world’s corn supply.

The U.S. grows two times more corn than any other crop.

Over 82 million acres go to corn production in this country, and those millions of acres produce over 14 billion bushels of corn.

An ear of corn averages 800 corn kernels divided into 17 rows.

And it turns out that the average stalk of corn produces only one ear. But, as this article explains, even 800 kernels is still worth a lot of money to the farmer.

One bushel of corn weighs 56 pounds.

One bushel is the equivalent of a little over 9 gallons. At the 2017 average of 176 bushels per acre, that’s over 1,600 gallons and almost 10 thousand pounds of corn per acre.

Another 30% of U.S. corn goes to livestock feed and over 10% is exported. Most of the rest goes toward producing foods and drinks.

The less irrigation you need, the better. Even though it helps producers grow crops in areas that have less water, irrigation has some negative effects on fields. These include soil erosion and the leaching of nutrients.

Corn has more than 3,500 uses. It appears in a variety of products, including peanut butter and batteries.

Corn products appear in many other surprising places, including in fireworks, crayons, paints, tires, carpeting, wallpaper, shoe polish, and chewing gum. See this infographic for more.

The corn plant is native to the western hemisphere.

Today, the only continent where it doesn’t grow is Antarctica. The corn we eat today is probably the ancestor of a wild grass called teosinte that originally grew in Mexico.

Before WWII, most farmers harvested corn by hand.

Now, thanks to combines, the harvesting process is much faster and much simpler for the farmer. Combines cut, thresh, and clean an ear of corn all in a matter of seconds.