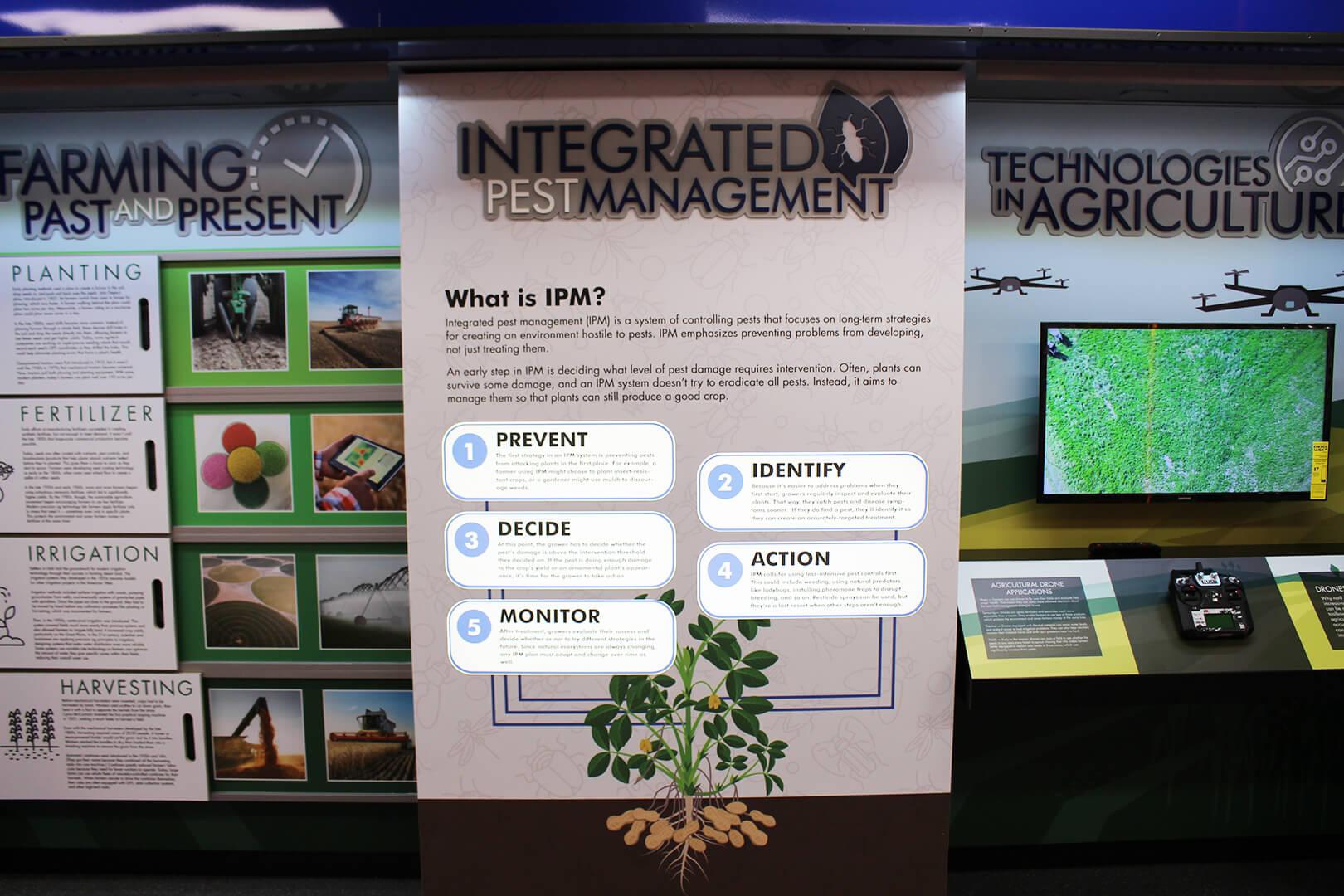 As you probably know, pesticides are one of consumers’ top concerns when it comes to buying food. One chain of organic-only grocery stores surveyed its customers and found that for a whopping 90%, avoiding pesticides was their main reason for choosing organic produce. But ag groups can help address consumers’ concerns by explaining Integrated Pest Management, or IPM.

IPM principles give farmers a variety of strategies to deal with pests. Instead of using pesticides as the default, IPM calls for using pesticides alongside non-chemical pest controls. But unfortunately, many consumers have never heard of IPM.

Explaining the Basics of IPM

Our clients at Virginia State University decided to tackle this knowledge gap with a display explaining the basics of IPM. The display would go in their exhibit trailer, inside a section talking about precision technology in modern agriculture. That’s because although IPM doesn’t necessarily rely on technology, it shares precision ag’s focus on increasing sustainability.

At its core, IPM’s philosophy is about using the least intervention necessary to protect crops. It’s implemented through a series of five steps. The display we made for VSU highlighted each of the steps: prevent, identify, decide, action, and monitor.

IPM emphasizes creating an environment that’s unfavorable to pests. Ideally, farmers don’t want any pests to deal with in the first place. But because that’s unlikely, IPM also calls for farmers to frequently scout their fields for pest signs. That’s where the second step (identify) comes into play. If farmers find a pest symptom, they have to correctly identify the pest so they can treat it precisely.

In the decision-making step, farmers have to decide whether the amount of crop damage is tolerable, or if it’s severe enough to justify intervening. When pest controls are needed, farmers take action with whichever management strategy seems most likely to solve the problem. Some IPM strategies include releasing predator insects (similar to gardeners using ladybugs to get rid of aphids), installing bug traps in the field, uprooting weeds, and so on.

Farmers can use pesticides or herbicides if they need to, but those are a last resort in an IPM system. The final step is to continue monitoring the field to evaluate how well the treatment worked and make sure new pests don’t appear.

Now, not every farmer who uses IPM techniques follows the whole program strictly. Many farmers mix and match, using elements of IPM that work for their farms even if they don’t adopt the whole system. That makes it hard to measure how many farmers use IPM, but it does seem to be increasingly common. And now, Virginia State University has an eye-catching way to clearly explain how the IPM system works and how it benefits farmers and consumers.