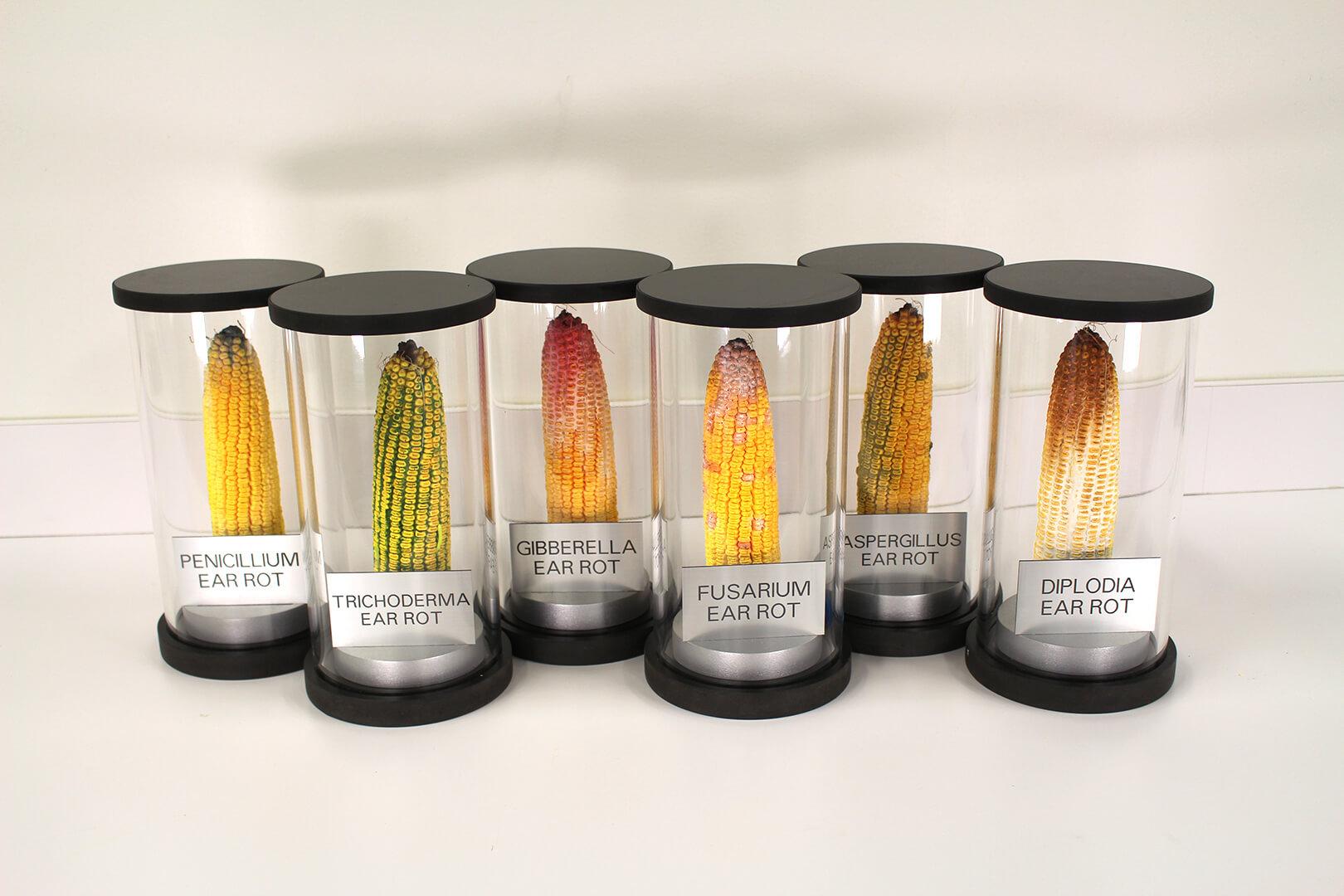 Why would you want to show off diseased plants? They’re the stuff of stress and nightmares for farmers — no one wants to see a ruined crop. But nevertheless, several of our customers have asked us for realistic replicas of diseased plants. The latest request was for replicas of corncob ear rots.

As surprising as these requests might be, there’s a good reason for them. Our clients for these jobs are often university extensions or plant pathology departments. Their whole job is about studying plant diseases and finding ways to overcome them. So they can’t just talk about healthy plants; they spend most of their time on the unhealthy ones.

Why Replicas of Corncob Ear Rots?

Corncob ear rots are particularly important to recognize. Their signs can be subtle, just some moldy powder in between the corn kernels. Nevertheless, they have big impacts. Some molds produce toxins that harm cattle and pigs, so people have to be able to identify the disease before any affected corn gets fed to livestock.

The consequences of not catching corn ear rots can be severe. At low levels, mold toxins can cause animals to reject their feed or to gain weight more slowly. But some toxins can cause reproductive problems or even infertility in breeding herds. The problem is particularly important for dairy cows. One type of mold toxin, aflatoxin, can pass into their milk, where (at high enough levels) it could harm humans. Thus, milk with high aflatoxin levels must be thrown away.

So agronomists, farmers, ranchers, and elevator staff all need the ability to identify diseased corncobs. No wonder, then, that the University of Kentucky’s agriculture program wanted to make sure they covered corncob mold thoroughly. That’s why they asked us for hands-on ways to illustrate the distinguishing characteristics of different kinds of corncob ear rots.

We’d already developed our replicas of healthy corncobs, so we just needed to reproduce the disease symptoms. A binder full of reference photos showed us what we needed to aim for. Since molds come in a rainbow of colors, it took our craftsmen some time to figure out how to capture their intensity. But they eventually found a material that did the trick.

Each diseased corncob started off as a normal corncob model, then got tweaked and repainted to show the effects of a different ear rot. The University of Kentucky wanted us to include six of the most common corncob ear rots: gibberella, diplodia, trichoderma, aspergillus, penicillium, and fusarium. Some of them look similar; for example, aspergillus and trichoderma both create a green powder between the kernels. But they all have distinguishing features, even if they’re subtle.

By capturing the small differences between the corncob ear rots, our replicas make it easier to correctly identify a diseased corncob in real life. We’re proud to help the University of Kentucky train the next generation of agronomists and feed suppliers.

You can see photos of each type of corncob ear rot we replicated in our online catalog.