By Exhibit Farm
Dec 08, 2017
in Artificial Plants,Behind the Scenes

Behind the Scenes: The Making of Artificial Pea Plants

During the construction of the AgroLiquid IQhub, the Exhibit Farm team made some oversized artificial pea plants for one of the featured exhibits, a display that explores the movement of water through soil beneath a pea plant. In today’s post, we’ll give you a look behind the scenes at how our artists made these convincingly realistic plants. 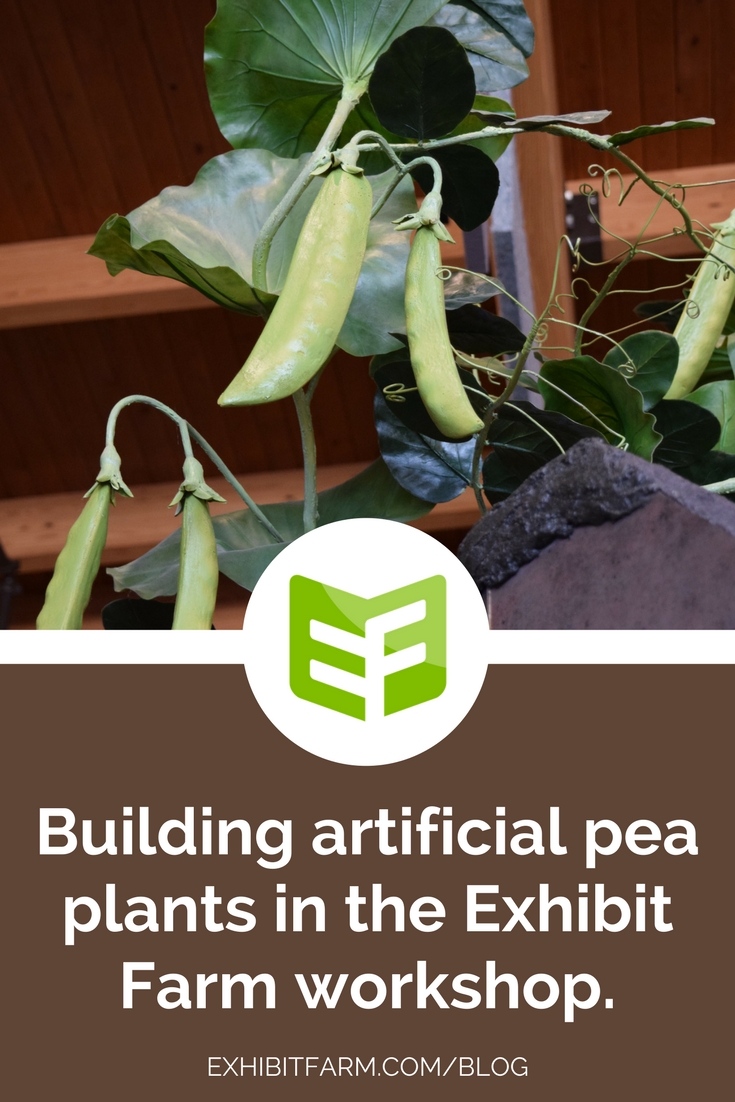 When it comes to making replicas of plants, the fellows on the fabrication team have to put on many different hats to get the job done. As we mentioned in our post about our artificial corn plants, in order to make a product so perfectly replicate the actual plant, you need the skills of a cake-decorator, a painter, an engineer, and a woodworker all at once.

That’s not all, though. A lot of other elements come into play when you’re trying to replicate nature. In order to make a product that actually looks like the plant it’s replicating, you need to have a foundational knowledge of that plant--of what it looks like, how the various parts fit together, and so on.

And this is where botany and biology play a role. Even if the craftsman doesn’t consult science books during the process of making the artificial plants, botany and biology just so happen to sneak into the process when he starts studying the nooks and crannies of the plant and its structure. The job takes research. It takes attention to detail. The actual process of building the plant can only follow after the craftsman takes these first steps. And all of this certainly applies to the artificial pea plants we made for the AgroLiquid IQhub’s water movement display.

Not Your Average Roots

At the bottom of every plant is a root system. Our craftsmen chose to replicate a network of pea plant roots using metal wires. They painted the wires a neutral yellowish color and arranged them in a web-like system. 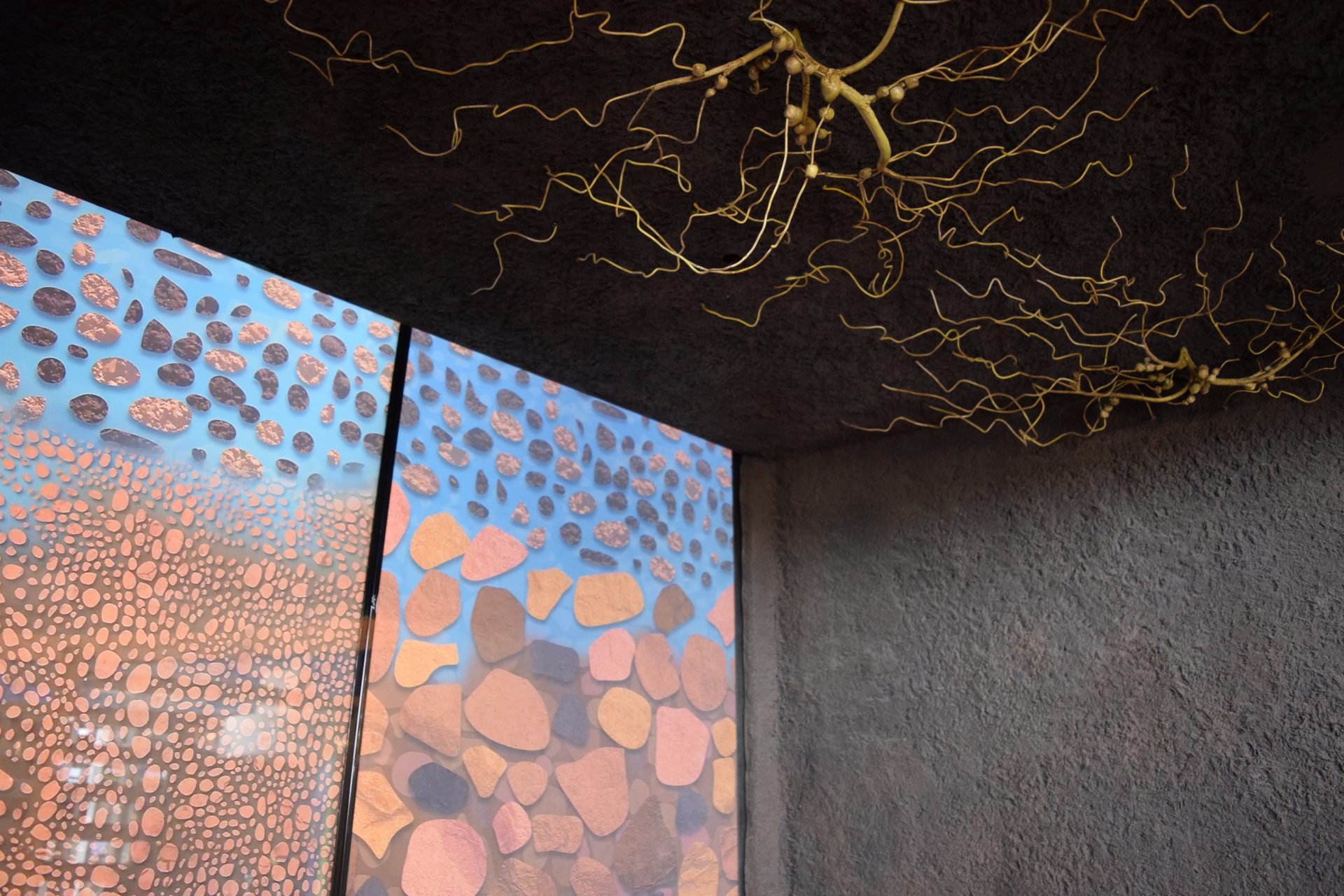 The root system of pea plants, however, involves more than just a web of fibrous strands. Pea plants, along with other leguminous plants, develop nodules on their roots. These nodules contain certain kinds of bacteria that help the plant convert nitrogen from the air into nitrogen that the plant can use. Remember what we said about botany and biology playing a role in construction of these artificial plants? Science certainly played a role here. Without a cursory scientific understanding of the plant, we likely wouldn’t have known to include those nodules on the roots.

To replicate these nodules, the craftsmen used sculpting epoxy. With this putty-like substance, they formed small objects in the shape of the root nodules and attached them to the wires in patterns appropriate to how the nodules would show up on an actual pea plant. The team then attached these roots to the roof of the exhibit, giving visitors inside of the unit the sensation of being underground.

The Making of Vines and Branches

The system of pea plant stems above ground is composed of the same kind of metal wires used for the roots. In both the roots and the stems, the metal wires allowed for flexibility in arranging the plant elements. The posable metal was also a material durable enough to hold its shape once arranged as desired. The craftsmen coated the larger stems with a flexible, durable coating. The coating has a green color that mimics the color of actual pea plant branches.

Although also made of metal wire, the smaller stems are not covered in the same coating as the larger stems. Instead, the craftsmen painted them. That way, the coating would not look so thick on the thinner vines. They then sculpted these smaller metal wires into spiral shapes like actual vines. Fusing the individual branches and vines together was the last step before adding the artificial leaves and pea pods.

The crowning glory of the artificial pea plants is the pea pods. For this particular replica of the pea plant, our designers chose to scale up the pea plants in size. By making a larger plant, they’d ensure that the details would be more visible from a distance.

Because of this decision to enlarge the plant, the craftsmen were unable to use an actual pea pod to make a mold for the pods. Instead, they hand-carved molds of the pea pods. They made two or three different pea pod versions to incorporate a realistic variability into the fruit of the pea plant.

After taking the foam pods out of the molds, the craftsmen painted the pea pods the appropriate pea green, using specific techniques to match the sheen of an actual pea pod. One of our craftsmen recalls studying the sheen of an actual pea pod in order to make an accurate replica. Yet again, without these detailed observations of the actual plant, our team would not have been capable of making such impressively realistic artificial pea plants.

The finished product of these artificial pea plants is currently on display at the AgroLiquid IQhub in St. Johns, Michigan.