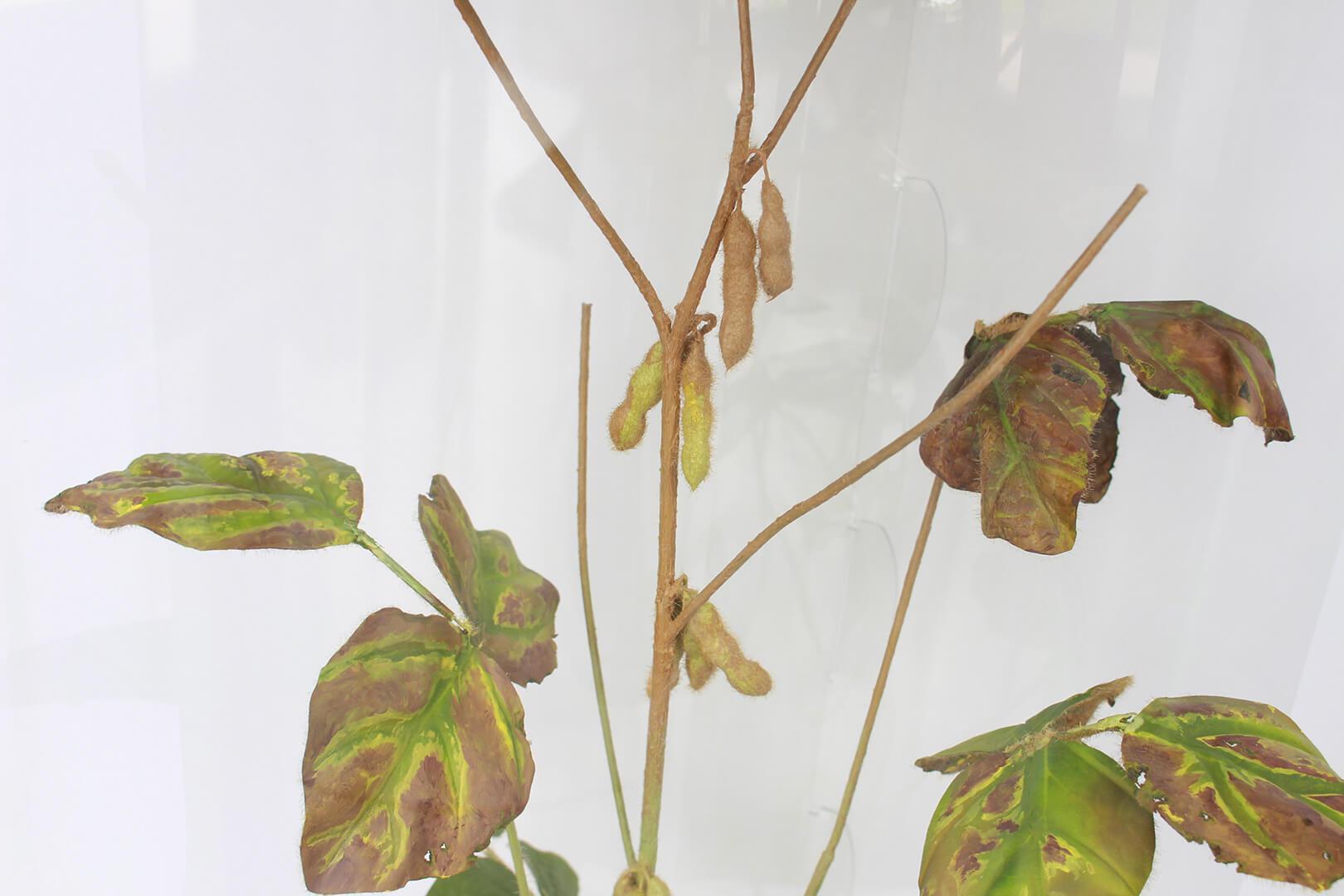 When students study medicine, they eventually get to work with real patients. But when you’re training plant doctors, there’s some hurdles to using real-life examples of soybean diseases. Namely, most of the school year falls in the winter and early spring, when crops aren’t growing.

Plant pathologists can use photos of infected plants as teaching aids, of course. But that isn’t quite the same as handling a real plant. Students need to see what the symptoms look like in life size, ideally with 3D detail.

Several of our clients at ag colleges or university extension offices have gotten around the problem by asking for realistic replicas of plant diseases, especially soybean diseases. In fact, we recently expanded our catalog with two soybean diseases we’d never replicated before — even though they’re both common problems.

Lucy Maud Montgomery (who wrote Anne of Green Gables) once described a stomachache like this: “A sick stomach is not a rare disease, or a very deadly one, but it certainly takes the ginger out of its victim”. That’s kind of what pod & stem blight is like.

Pod & stem blight is a common soybean disease found across the United States. Strangely enough, it doesn’t affect yield very much. Instead, it damages the quality of the seeds an infected plant produces. If the infection is severe enough, it may keep the seeds from germinating once they’re planted. So, if farmers are growing soybeans for seed, they need to spot pod & stem blight in time to control the damage with fungicides.

The University of Kentucky asked us to make them a soybean plant model showing signs of pod & stem blight. We covered our replica in tiny black spots, mimicking the definitive symptom of pod & stem blight. These dark spots, called pycnidia, appear on the soybean pods and often form lines along the stems. We created withered leaves and pods as well, to show all the symptoms of this disease.

Like pod & stem blight, sudden death syndrome is a fungal disease. But (as its name suggests), sudden death syndrome is considerably deadlier. It can cut soybean yields in half in severe cases. Plus, because it lives in soil for a long time, it can infect multiple generations of crops. So, if their fields become infected, farmers need to recognize what’s killing their soybeans so they can plant resistant varieties in the future.

The two most distinctive symptoms of sudden death syndrome are leaf blights and leaf loss (starting from the top of the plant). We carefully duplicated both symptoms: the leaves with dead spots in between the veins, and the bare stems at the top of the plant. The lifelike detail makes it easier to recognize the disease if a farmer ever comes across it for real.

Having realistic replicas of soybean diseases frees teachers from trying to find and preserve real specimens of each disease. Obviously, if it’s possible to bring students to a field and show them real plants, that’s best.

But when that’s not an option, life-size replicas of diseased plants are the best substitute. Students can still see what the symptoms look like and learn how to tell them apart from other diseases. It’s a simple, but effective, way to make sure tomorrow’s plant pathologists are prepared to give farmers as much help as possible.