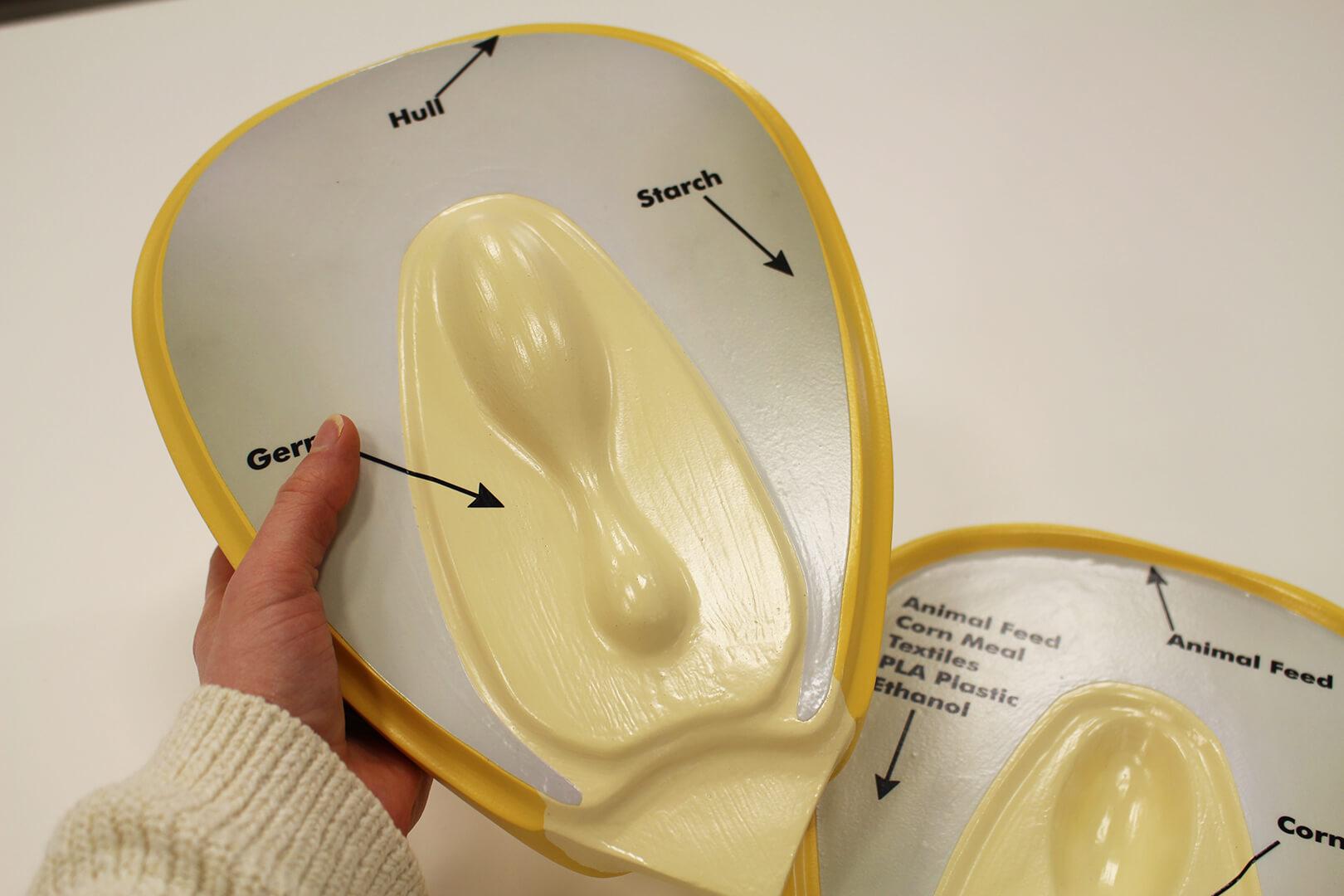 A Kernel of Knowledge: The 3D Corn Kernel Model

By Exhibit Farm
May 25, 2020
in Artificial Plants,Exhibit Farm Display

A corn kernel that’s nearly a foot long? It almost sounds like a Paul Bunyan story. If you’ve never heard of Paul Bunyan, he’s a legendary lumberjack supposedly of gigantic size. Unsurprisingly, many of the tall tales about him focus on the enormous quantities of food he needed. According to one version, his pancake griddle had to be half a mile wide just to make enough pancakes for breakfast!

Paul Bunyan might be a legend, but the massive corn kernel is definitely real. Granted, it didn’t come from a cornstalk; it “grew” in Exhibit Farm’s workshop. We think it’s still mighty impressive, though.

(You can see some more photos of this agricultural exhibit on its page in our catalog.)

Explaining the Uses of Corn

The story of the corn kernel model started when the Michigan Corn Growers’ Association (MCGA) realized that even though corn is a pretty familiar vegetable, most consumers don’t know about its structure. That might not sound like such a big deal. After all, you don’t need to be able to diagram a kernel’s parts to know it tastes delicious. But, as MCGA knew, adding buttery vegetable goodness to summer cookouts is far from corn’s only use.

People use corn to make textiles, animal feed, soap, and ethanol, to name just a few products. Thus, one way to educate consumers about how corn impacts their lives is to explain how corn gets transformed into everyday goods. And because each product uses a different part of the corn kernel, consumers have to start by getting an idea of what a corn kernel is really made of.

So, we created a gigantic, 3D corn kernel model to let MCGA show people in detail what a corn kernel looks like. The model comes apart into two separate halves. On one half, arrows label the parts of the kernel: the hull, the starch, and the germ (the seed itself). On the other half, another set of arrows show what each part is used for: the germ for corn oil, the starch for animal feed and plastics, and so on.

All in the Details

The model is three-dimensional both inside and out, thanks to our 3D CNC router (a special workshop tool that, unlike a saw, lets us cut things out in three dimensions). We sculpted it out of a foam solid, which means it’s very lightweight. The model’s designed to be picked up and handled so that consumers can feel the 3D structure for themselves.

Every detail of the kernel was carefully crafted. After the CNC router finished sculpting it, one of our craftsmen sanded it by hand to ensure a smooth finish. Then, we gave it a realistic paint job and even created a customized base that fits the kernel’s contours perfectly.

The high level of detail lets MCGA give consumers an accurate understanding of what corn really looks like. And that means they can give them a deeper appreciation of what corn gets used for. It’s a long list, as we mentioned; corn shows up in literally thousands of products. No Bunyan-esque exaggeration there!