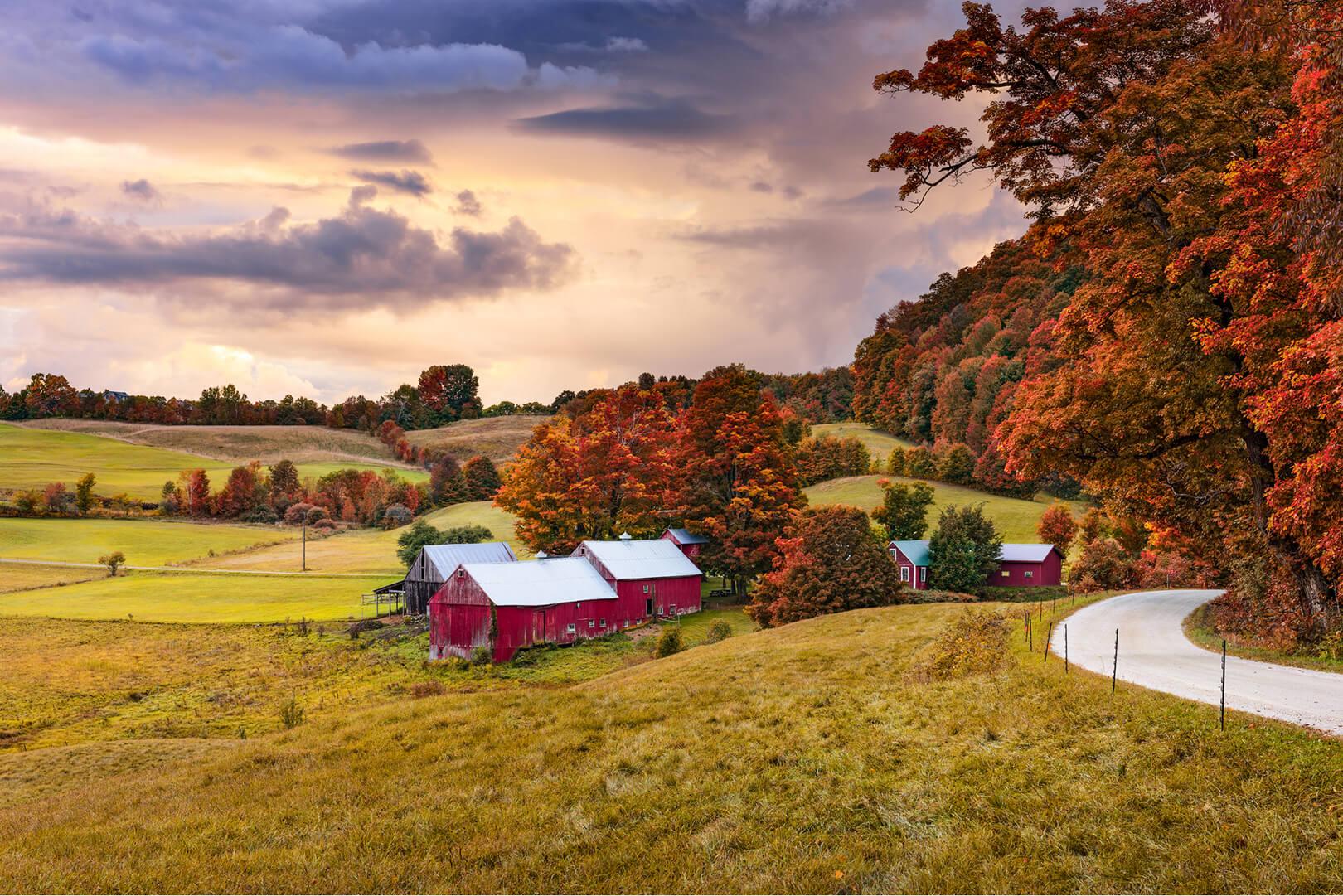 By Exhibit Farm
Oct 14, 2019
in Facts and Numbers,State Ag Spotlight

Welcome back to our State Ag Spotlight! We’re glad you’re here. Hope you’re rested from our jaunt to New Mexico, because this month we’re going to the exact opposite corner of the continental U.S.: New England. Specifically, we’ll be looking at the state of Vermont. October’s definitely the right time of year to look at Vermont — its fall foliage is gorgeous (as the million or so people who visit each October could tell you).

As always, let’s start with some quick facts about the state. It had a dramatic beginning — during the American Revolution it declared independence not just from England but from all the other colonies as well. Vermont existed as an independent republic from 1777 to 1791, when it became state #14.

These days, it’s still a pretty rural state, and still known for the beauty of its mountains (from whence comes the name “Vermont”). In fact, the type of soil that covers most of those mountains, the Tunbridge soil series, is the state soil of Vermont. Tunbridge soil is very good for growing trees, including the iconic sugar maple. (More on that in a bit.)

While we’re on the subject of official state things, it’s worth mentioning that VT’s state fruit is the apple. No wonder, since the state produces about a million bushels of apples a year. That’s around forty million pounds of apples!

About half of those apples are McIntosh apples. This popular red apple was developed in Canada, but its first planting in the U.S. was in Vermont. There are over 150 other kinds of apple also grown in Vermont, though. Vermonters sure must like variety. They also like picking their own apples: 200,000 bushels are collected at pick-your-own orchards each year.

According to FarmFlavor.com, Vermont “is an ideal place to raise livestock, thanks to its rocky, hilly terrain.” There you have it, folks. Can’t get a much better recommendation than “ideal.” Despite that rockiness Farm Flavor mentioned, Vermont also has a climate well-suited to growing grass, which means this is a good state to find grass-fed meat.

Unsurprisingly, cattle farming is the most valuable part of the livestock sector. The number of cattle farms in the state has gone down in recent years, but other sorts of livestock, like poultry, sheep, and goats, have seen the number of farms dedicated to them go up. And both the #1 and #2 ag commodities in Vermont are related to livestock (dairy and cattle/calves, specifically). It’s the #3 commodity that’s most famous, though.

That’s right: maple syrup is only the #3 ag commodity in Vermont. Don’t think it’s not a major industry, though. It generates over $46 million per year and produces 42% of the United States’ syrup supply. In 2018–2019 alone, Vermont’s total output was just over two million gallons, which was a 7% increase from the year before.

All that syrup has its origins in the sugar maple (which is also partly responsible for VT’s striking displays of flame-colored fall leaves). The sap of this tree is about 2% sugar, and a careful process of boiling and reducing can turn that sap into a syrup that’s about 66% sugar. As you might imagine, it takes a lot of sap to make a gallon of syrup. 40 gallons of sap, to be precise.

The sugaring season is between March and April, once warmer temps have started encouraging sap to flow. During this time, the sugar makers scramble to collect sap and to make sure the syrup comes out that perfect amber color, that perfect smooth consistency, and that perfect lightly-sweet taste. In recent years, natural maple syrup (as opposed to its corn syrup imitations) has grown in popularity. There have even been infused syrups developed, so if you’d like a cardamom-maple syrup on your pancakes, you can have that.

That concludes our overview of agriculture in Vermont. We know there’s a lot more that could be said, though. What do you know about Vermont’s ag industry? Tell us in the comments!