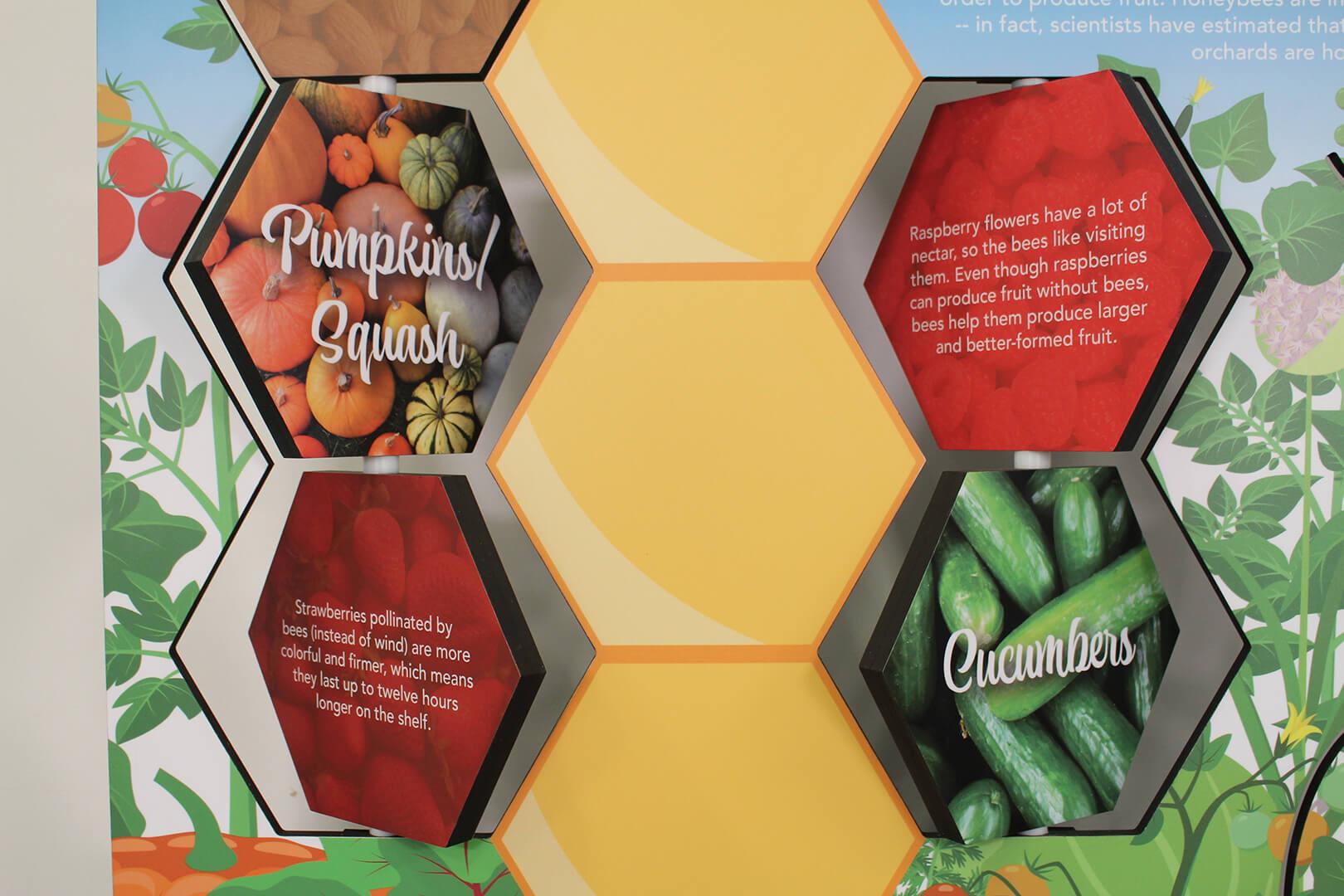 Helping the Helpful Honeybees: A Standup Display about Bees

By Exhibit Farm
May 24, 2021
in Children's Display,Exhibit Farm Display

In the annals of Exhibit Farm history, there are a few projects that stand out. Like our first exhibit trailer — that was a milestone. Or the IQhub museum, with over 20 unique exhibits all designed and built by yours truly. And then just this past spring, we had the Adventure of the Time Crunch, the Lightning-Fast Job.

We got an email from a county fair in Florida on March 18. They wanted to know if we could build and ship five displays to them in time for their fair starting April 1. (That’s ten business days, for those of you doing the math.) And oh yes, one of those displays would be a new one we’d never built before.

Now, we love a challenge, but we had to think about that one for a minute. It would be a really tight turnaround — maybe the tightest we’d ever done. But the fair needed the displays, and we saw a chance to prove ourselves not just the best company for agriculture-themed displays, but also a reliable partner that could come through in a pinch.

So we said yes.

Four of the displays for the Clay County Fair wouldn’t be a problem. They were all tabletop displays that we’d built several times before — small and easy to put together. But the fifth, the new one, was a 6′ tall standup — not exactly small — and it featured rotating panels we’d have to troubleshoot.

This standup display is about bees and their vital role in agriculture. Some crops, like almonds and pumpkins, rely on honeybees to pollinate their flowers and let them produce fruit. Other crops, like strawberries or cucumbers, can produce fruit without bees, but they produce better-quality fruit when bees pollinate them.

We chose five crops that love bees and highlighted each of them on their own honeycomb-shaped panel. The front side has a photo of the crop, then folks can rotate the panel to read fun facts about how important honeybees are for that crop.

(You’ll find more photos and the specs of the Buzz about Bees display on its page in our online catalog.)

From the Display: How to Help Bees

The display also talks about how people can help honeybees. Do you remember hearing about Colony Collapse Disorder (CCD)?  Back in the early 2000s, beekeepers found their bees abandoning their hives for no apparent reason. Fortunately, CCD is much less of an issue today.

But bee colonies still face many challenges.  Mites, diseases, and pesticide exposure can harm bees, and as more land gets developed, it becomes harder for bees to find enough nectar.  So we included a section on the display with tips for creating bee-friendly areas in your yard. They’re simple things like “don’t use too many pesticides.”

One for the Books

It took some engineering and some hard work, but we did finish the new standup display about bees in time and got it shipped to Florida. Our contact at Clay County Fair reported that all the displays were a hit. They even sent us a photo of visitors enjoying the cornhole game we made for their booth! (And if you look closely, you’ll see the bee display on the right-hand edge of the photo.)

With one of these bee displays under our belts, we knew it would be easier to make the next time someone orders it. But the first time we made it? That’s a story we’ll be telling for a while.