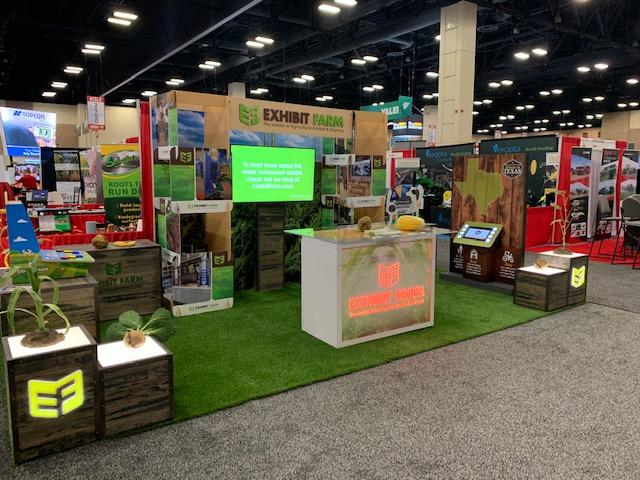 During the final week of February, part of the Exhibit Farm team traveled down to San Antonio to attend the 25th annual Commodity Classic. The week was filled with networking, showcasing, and experiencing all downtown San Antonio had to offer.

We arrived in San Antonio on Tuesday afternoon to tour the Henry B. Gonzalez Convention Center. After that, we toured the Riverwalk in downtown San Antonio. Our Uber driver informed us that the Riverwalk is a manmade river that highlights the downtown district of San Antonio. This area is full of beautiful scenery. On Wednesday we got to work on unpacking our crates and setting up our booth.

Thursday started the trade show and we were busy making connections with all the attendees. Friday morning, we attended the General Session which featured leaders in different ag associations as well as an appearance by the United States Secretary of Agriculture, Sonny Perdue, who had an outstanding and uplifting outlook on the future of agriculture for United States farmers. We were also surprised by a video clip from President Donald Trump who informed the audience he is working hard for them and he will try to make an appearance in person next year. After the General Session, we continued networking at the trade show.

Friday evening, we attended the Michigan Corn Growers Association’s meet and greet which was full of hors d’oeuvres, drinks, and laughs. Saturday morning the trade show continued, and in the afternoon, we started to pack up our booth into the crates for the long trip back to Michigan!

New To Our Booth

Since this was Exhibit Farm’s second appearance at the Commodity Classic, it was nice to see many familiar faces. With that being said, we brought some new interactive and educational displays that we didn’t have  at last year’s convention.

The first new display that we took this year was the Local Agricultural Commodities Display. The original idea for this display came from a version we built for the Missouri Department of Agriculture. However, with the Commodity Classic being in San Antonio, we built one with the focus on Texas. This is a standalone, two-sided display with an electronic interactive side, and a timeline of agriculture in Texas on the other. This display highlights the main ag commodities that are grown in Texas. It is completely customizable and can be made to represent any area.

The second new display that was a big hit was the Anatomy of a Corn Kernel. This piece makes learning about a corn kernel fun and interactive for all ages. It starts off as one piece, and can be split in half to expose the inner layers. One side focuses on the uses of a corn kernel, and the other explains the anatomy. Attendees voiced their interest, as well as their ideas to expand this product into other ag commodities such as soybeans, a corn cob, and wheat.

Finally, the third new display was the corn cob replicas. These were developed as a solution to a community education problem. An educator came to us and stated every time they take real corn cobs to a classroom, the students wind up with sticky hands and their corn cobs are broken. We provided a solution by building exact replicas of a sweet corn, popcorn, and field corn cob.

These were a hit with the farmers, educators, and ag associations at the trade show. The realism of this product was proven when an attendee tried to take a bite out of the sweet corn cob, only to be met by our plastic replica (and possibly a chipped tooth). Most attendees got to see the field corn and the sweet corn, but mysteriously the popcorn cob seems to have grown legs and walked out of our booth on the first day!

All in all, this year’s Commodity Classic was a great experience. We met many new people which has us very excited to see what ideas come forward this year. You’ll be able to stop by our booth again next year as we will be back in San Antonio at the 26th Commodity Classic. You may not be able to recognize us though, as we are already getting started on a totally new booth!

Thank you to all those who stopped by this year, and we look forward to seeing you next year!