Welcome back to our agricultural literacy series. After all of our talk about “location, location, location” last time, some of you may be realizing that connecting with consumers is a lot of work. And you may be wondering if it’s all worth it. Does it really matter if consumers understand where their food comes from? After all, they’re not the ones growing the food. So what is all the fuss about? They’re gonna eat the food whether they understand it or not, right?

Well, not necessarily. As recent history has shown us, the farming community has one big reason to be intentional about connecting with consumers. The reason is that consumers drive the market. 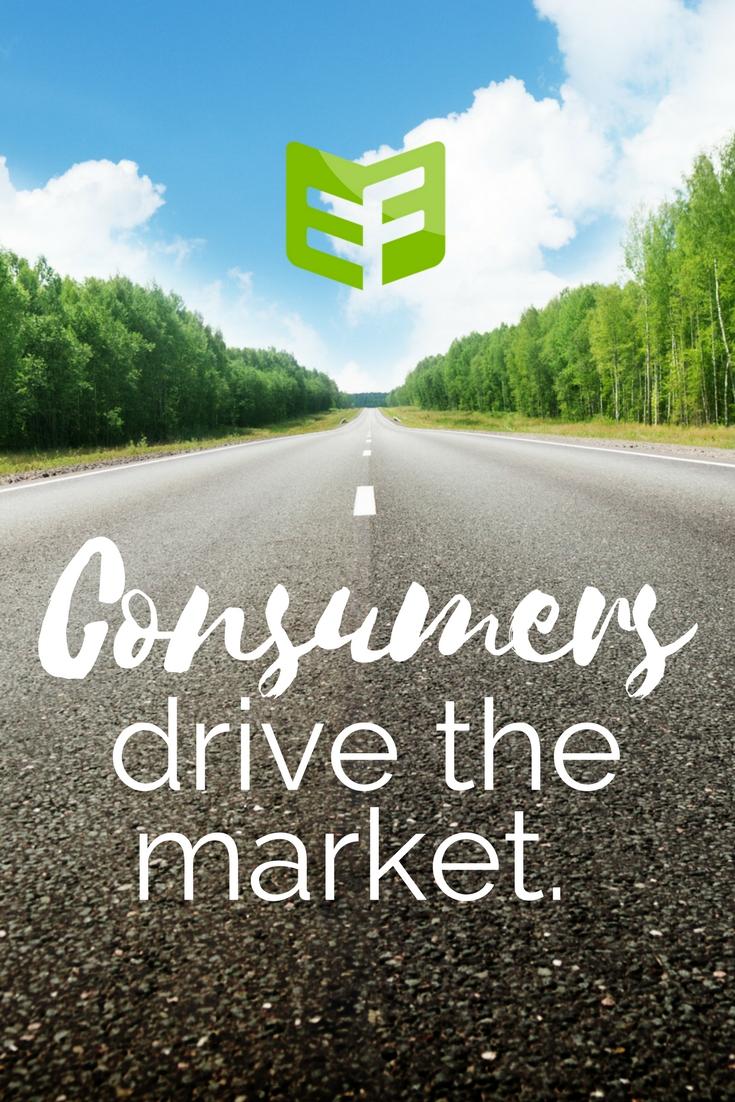 And it’s not just us saying it. Plenty of folks inside and outside of the agricultural industry recognize the same fact. They acknowledge that consumers are the ones with purchasing power. They’re the source of the money. The stuff that consumers buy is successful, while the stuff they don’t buy doesn’t sell. Obviously, consumers want to buy the food that they want to eat. Not the food that they fear or dislike. As a result, it’s the food in the former category that brings a profit. The other stuff just sits on the shelves of grocery stores until the producers stop producing it. And, many times, they actually do stop. After all, there’s no use trying to sell something that’s bringing no financial gain. Plus, that’s just how the free market works.

Consumers at the Wheel

This is why, according to an essay published on the Food and Agriculture Organization of the United Nations website, the ag industry’s success depends first and foremost on consumer satisfaction. The article reiterates my point: when it comes to particular products, happy consumers buy more; unhappy consumers stop buying. Not only that, but they also voice their opinions, influencing the purchasing choices of others. And they should. As the article says, “[Consumers] have a right to voice their opinions about the food control procedures, standards and activities that governments and industry use.”

The ag literacy program coordinator for the University of Illinois Extension backs up this idea in this article at The Herald-Whig. “Overall, it’s a good thing for the consumer to know about agriculture and where their food comes from and for them to ask questions,” she explains. “They drive the market.” She’s right. The whole purpose of the ag industry is to feed people, so it makes sense that the people being fed should be engaged in the process.

Why Producers Should Care

Now, let’s turn to the producer and everyone else in the ag industry. If they truly understand the weightiness of a consumer’s role, they should care how consumers view the industry. Consumers are going to be involved whether we actively engage with them or not. So we may as well give them the inside scoop rather than letting their opinions be swayed by alternative sources. In the past, the industry has suffered from its failure to step up and bridge the gap with consumers. It’s not something we should repeat.

The effect of this disconnect is something that Shauna Rumbaugh at The High Plains and Midwest Ag Journal touched on in her report of a Bayer CropScience web event. During this event, Zach Hunnicutt of the AgChat Foundation spoke on the farmer-consumer relationship. According to Rumbaugh, “[Hunnicutt] said it’s also important to bridge the gap between producers and consumers, as the disconnect puts producers at risk.” The primary risk of not repairing the disconnect, he clarified, is that producers are subject to consumers’ uncertainty and fluctuations in their demands. Rumbaugh reports, “Many times consumers do not [believe in the safety of agricultural products] … which negatively affects demand for agricultural products.”

As Hunnicutt went on to explain, there’s more to the disconnect than simply market demands from the consumer. It turns out the consequences are a bit of a packaged deal, bringing the potential of “change on the legislative level.” Rumbaugh explains, “[Hunnicutt] said producers want to avoid the push by those not involved in agriculture for farmers to circle backward. Most people would not want to get on an airplane that used technology from several decades ago, he said. But some believe farmers should go back to farming methods used in the past.” They often consider these older practices “safer or more sustainable.” In fact, however, the industry has developed newer methods and technologies for the very purposes of being “safer” and “more sustainable” than these old practices.

David Perry at the World Economic Forum reiterates the effects of consumers on technological advancements. He writes in a 2017 article, “Connecting consumer preference to farm profitability is essential for driving the adoption of these new technologies.” Later, he continues, “The essential connection between agricultural practice and consumer preference will dramatically accelerate the adoption of new sustainable technologies in agriculture.”

Perry points to the organic movement for an example of how this works. When it comes to “specialty fruits and vegetables,” he says, “organic consumers have demonstrated a willingness to pay a premium for crops grown in a way that benefits the environment. This premium provides an incentive for farmers to grow crops using organic methods, despite these being more difficult to grow and often resulting in lower yields.” In other words, organic may cost farmers more up front. But it’s a cost consumers are willing to pay.

Be a Back-Seat Driver

With this, Perry circles back to our original point of the consumer’s purchasing power. He continues, “Consumer willingness to express a point of view with their wallets can directly impact the management decisions of growers.” And then he gives the industry yet another reminder of the issue at hand, asserting that, “[f]or most of today’s commodity crops, there is a pronounced disconnect between consumer preferences and growers’ practices.” The consumer is in the driver’s seat but, in a sense, doesn’t always go where the ag industry needs to go.

So, if this is true, what’s the take-home for the ag community?

In my mind, the take-home is for the ag community to become the world’s nicest back-seat driver. Usually that term comes with negative connotations, but I suppose we could think of it more like a navigator. The ag industry has the resources and the knowledge to tell consumers all about the terrain. And by “terrain,” I mean the terrain of the food world. They know the back-streets to take. They know the slow routes to avoid. So, since they have things that are worth sharing with the consumer, why not hop in the back of the car?

If you’re a part of that community, take a ride and share your knowledge. Share the story of agriculture. You may find that consumers are more ready to listen than you thought. And you may end up helping consumers take the industry in some great directions. After all, informed consumers help the ag industry. So why don’t you help inform them?