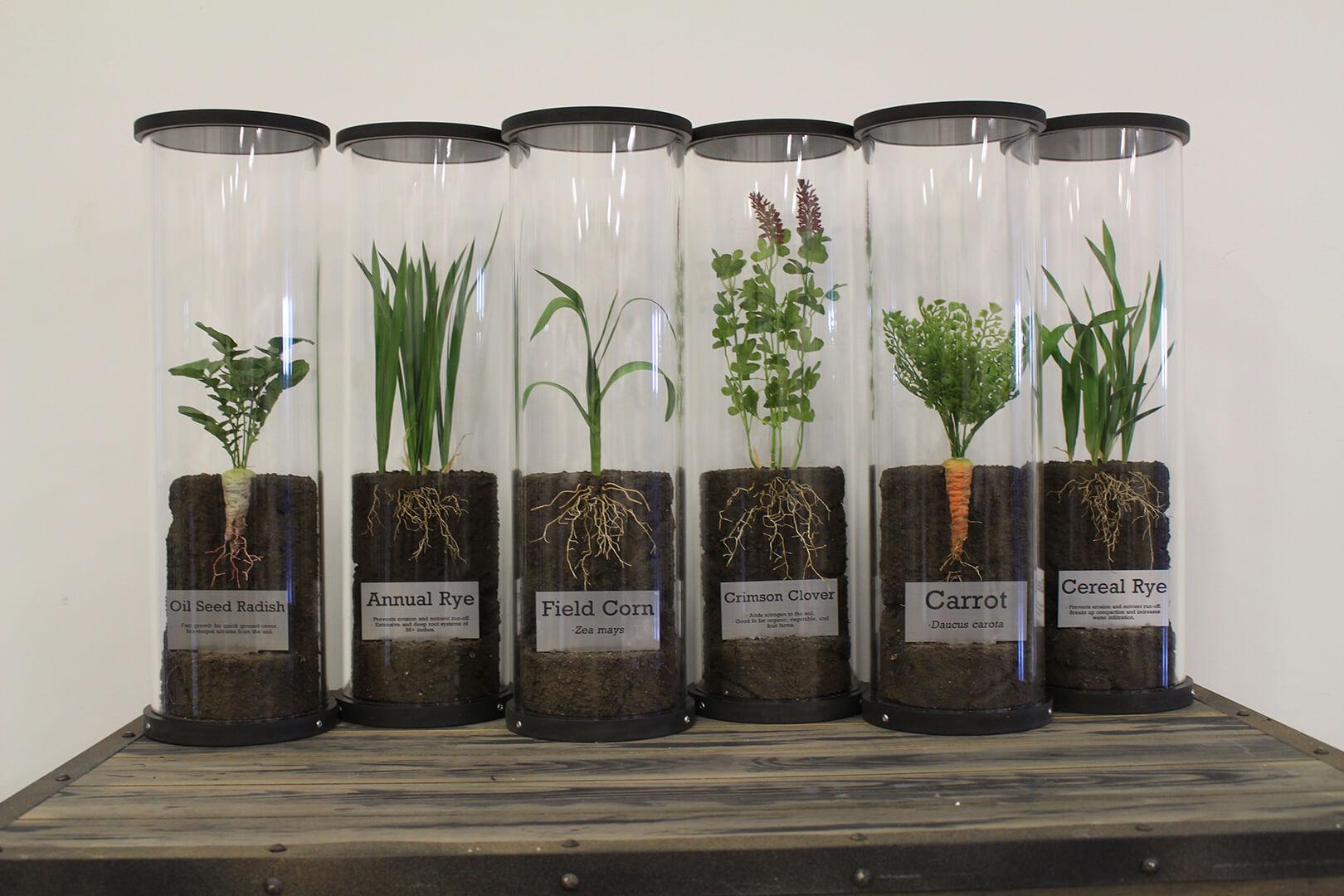 We bet you’ve heard people talking about cover crops recently. Between the buzz around carbon markets and an increased interest in soil health, cover crops are becoming a hot topic. And they come with an impressive list of benefits: they can increase microbial life, help soil absorb water better, prevent erosion, and more.

But even so, the USDA’s most recent report estimates that in 2017, cover crop acreage was only 5% of America’s total harvested cropland. Clearly, there’s still a need for education about the options and benefits available with cover crops.

Allen County Soil & Water Conservation District recently stepped up to the challenge. They asked us for a series of displays outlining the basics of soil health. And they wanted to focus on introducing cover crops in particular.

(You can find all the cover crop replicas we created in our online catalog.)

Choosing Cover Crops for the Replicas

Now, there’s a lot of different cover crops to introduce. Each of them comes with their own unique set of benefits and management needs. So we couldn’t exactly cover all the cover crops. But we could talk about a good representative sample.

We chose several different types of cover crops for Allen County SWCD’s display. Some cover crops have nitrogen-fixing properties; we chose crimson clover to represent that category. Others excel at controlling erosion, like the cereal rye and the annual rye. And other cover crops have the opposite effect: they loosen up compacted soil without the need for mechanical tillage. We picked the oilseed radish as an example of that kind of cover crop.

Our craftsmen studied each plant carefully, figuring out how to replicate it in miniature. (We made each plant replica slightly smaller than life-size to help with portability.) They paid careful attention to every part — the leaves, the roots, and even the flowers (in the case of crimson clover).

Eyes on the Roots

Since some of the biggest benefits of cover crops come from having living roots in the soil, Allen County SWCD particularly wanted to highlight the roots. So each of our cover crop replicas shows a cutaway view.

Above each base of artificial soil is the plant mode. The stems and leaves show exactly what you’d see looking at it in a field. But then, the base splits in half to reveal the root system seeming to poke out from the dirt.

Our craftsmen even recreated the large taproot of the oilseed radish. They painted it with realistic cream and pink shades and carefully sculpted its wrinkled, roughly-triangular shape.

Now, with their new replicas, Allen County SWCD can introduce cover crops more memorably. Farmers who don’t currently use cover crops can get a firsthand look at some of the options available. And maybe, being able to picture more clearly how cover crops could help their soil will encourage them to give one a try.