By Exhibit Farm
Aug 16, 2018
in Facts and Numbers,Food Holidays

Welcome back to our series on monthly food holidays! August is halfway over already, but we still have a lot of food days to look forward to this month. Whether it’s some internationally beloved meats, gentle fuzzy fruits, or a tasteful collection of dried fruits and nuts, this August has a holiday for it all and for food lovers of all kinds. So let’s dig in and see what we’ve got coming in these next couple weeks.

We’ve already said a word or two about the delicious fruit, the peach, in a previous blog post. But that was in the context of the delightful combination of peaches and cream. This month, we’re looking at what peaches have to offer as an independent fruit.

The first thing we should note, then, are the nutritional benefits of peaches. In addition to being a good source of antioxidants, peaches also offer their eaters a fair amount of vitamin C. As this article from Rutgers says, vitamin C “helps a person develop resistance against infections.” So you think you’re getting a sore throat? Eat a peach. While you’re at it, remember that the vitamin A in peaches also helps prevent certain cancers.

In addition to these health benefits, peaches as an agricultural commodity are extremely beneficial to the countries that grow them.

The lucky nation of China is the top peach producer in the world. Italy, Spain, and the United States follow in the other top four slots. But China has such a big lead that there’s no chance of those countries surpassing Chinese peach production. China, in fact, produces over 50% of the world’s peaches. The U.S. can thank California’s massive peach production for ranking the nation so high internationally. 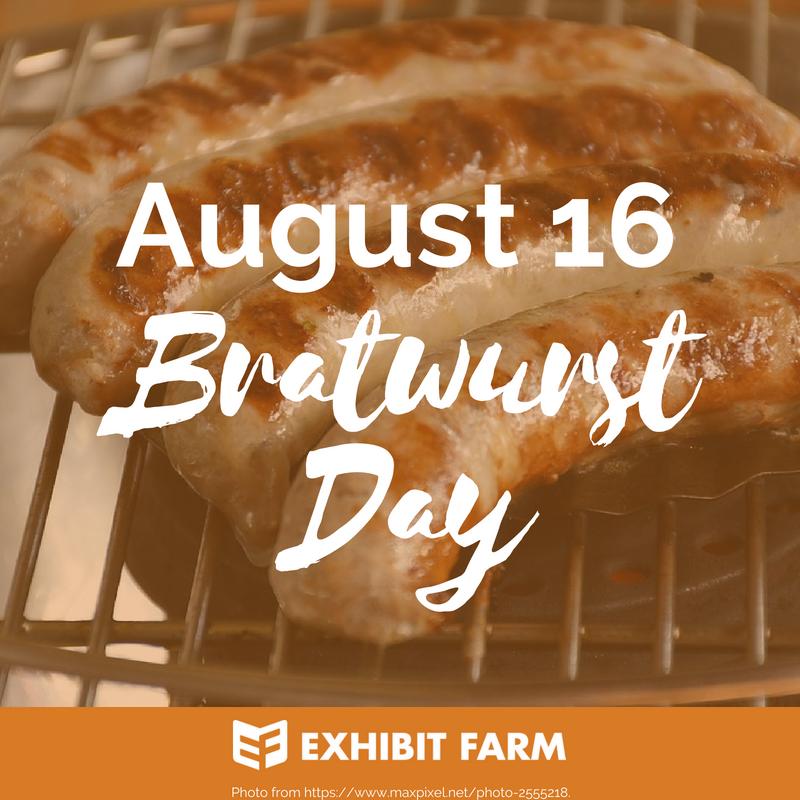 For those unfortunate ones among you who are stuck in the world of hot dogs, let me introduce you to a sausage that deserves your hot dog buns more than the hot dogs themselves. This sausage, known as the “bratwurst,” is a traditional German food. Best translated as “unwasteful sausage,” the “bratwurst” was invented as a means of using the extra scraps of meat that otherwise would have been thrown out. These resourceful Germans would take the small scraps of meat and combine them inside of a casing generally made out of animal intestines.

Although bratwursts today can be made of veal or beef, they’re usually made of pork. So we have good old swine to thank for gracing our summer cookouts. Although, according to recent data, Iowa, North Carolina, and Minnesota are the top states in number of hogs and pigs they have, Wisconsin is the state that has distinguished itself in the bratwurst realm. It’s said that the brat is “Wisconsin’s favorite meat.” And that might just be the case, especially considering that Madison, Wisconsin, annually hosts “the World’s Largest Brat Fest” over Memorial Day weekend. 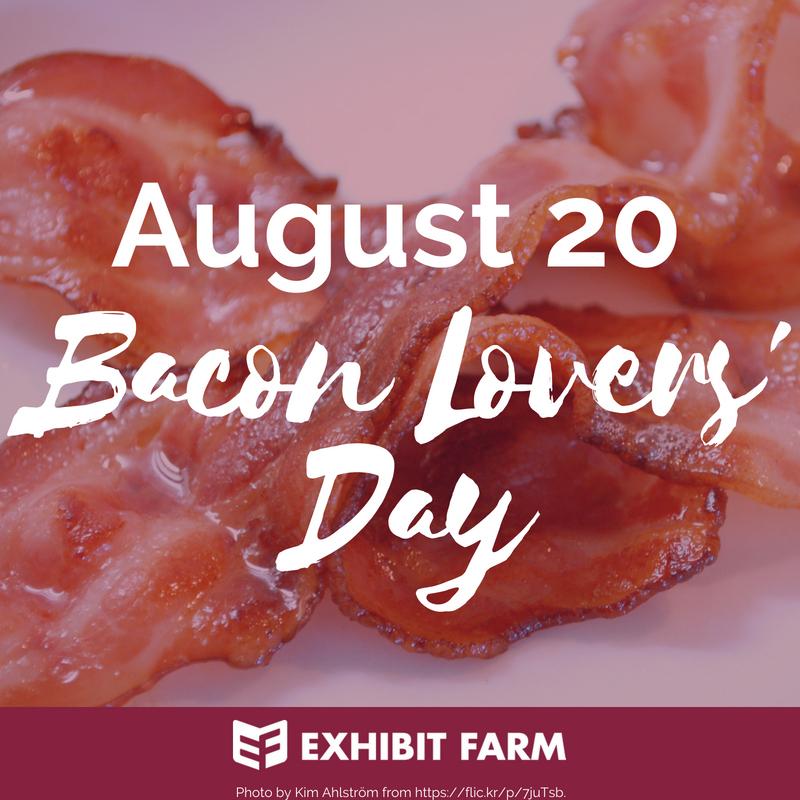 Sticking with the whole pork theme, we now turn our noses to Bacon Lovers’ Day. This delightful breakfast meat has a long and rich history that goes back to Great Britain. According to the English Breakfast Society website, the original Middle English term “bacoun” referred to “a traditional cut of pork meat unique to … Great Britain at the time.” Other languages had similar versions of the word “bacon,” but it’s the English version that really stuck around. They just dropped the extra “u.”

Just as the word “bacon” has a history, so does the phrase “bringing home the bacon.” It turns out that it really came from a contest put on by a church in the English town Dunmow in the 12th century. To reward well-behaved husbands, the church “promised a flitch (side) of bacon to any married man who could swear before the congregation and God that he had not quarreled with his wife for a year and a day.” Whoever won, they say, not only got to bring home the bacon but was also highly respected by the rest of the community. The English Breakfast Society says that Dunmow still holds “Flitch Trials” every 4 years, awarding a “flitch of bacon” to married couples who, for a year and a day, have “not wished themselves unmarried again.”

If you’d like to learn more about bacon, note that there’s actually a whole Wikia dedicated to that beloved meat. (Be careful if you visit, though. It seems that, although bacon lovers have good taste for meats, they occasionally have distasteful language.) And, if you’d like to celebrate the fabulous meat with other Bacon Lovers, just do a Google search for a list of bacon festivals. There’s probably one coming to a town near you. 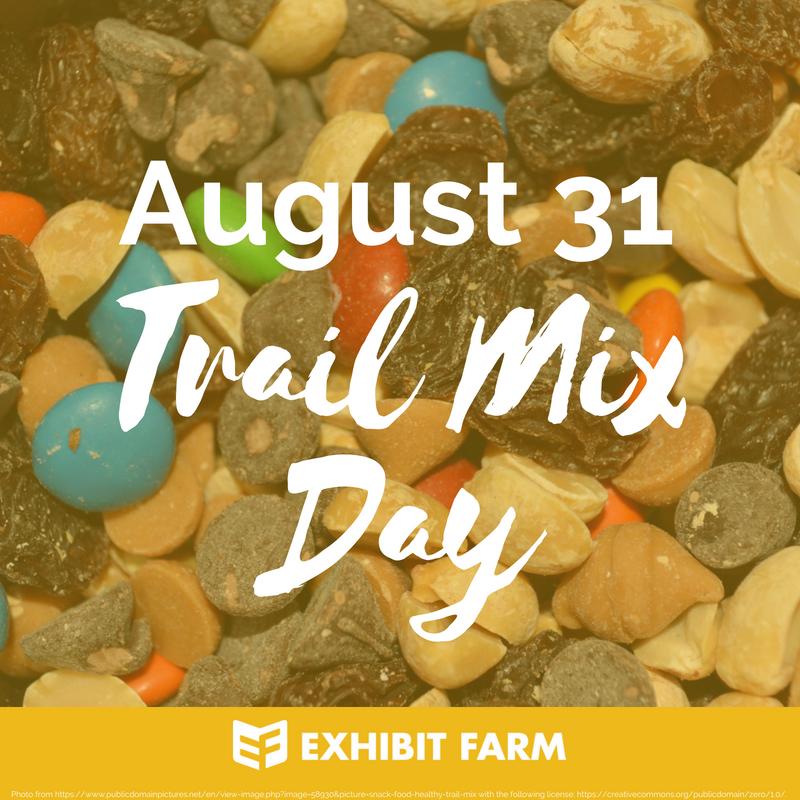 Raise your hand if you pick out all of the M&Ms from trail mix.

Shame on you. I admit, though. That’s probably the best part of the snack. But the combination of those tiny chocolate pieces with nuts and raisins and other dried fruits is almost better than the chocolates by themselves. According to all-knowing Wikipedia, this genius combination of snacky items earned the name “trail mix” because it’s “an ideal snack food” for hikers. Not only is it “lightweight” and “easy to store,” but the combination of nuts, fruits, and chocolates is also “nutritious, providing a quick energy boost from the carbohydrates in the dried fruit or granola, and sustained energy from fats in nuts.”

Apparently, the history of trail mix is at least 100 years old. The outdoorsman Horace Kephart was one early dude to recommend the combination as a good hiker’s snack. He suggested it to his fellow outdoorsy people in a camping guide that came out in the 1910s. His version wouldn’t have had M&M’s, though, because those cutsie candies didn’t appear till the 40s.

In my mind, although chocolate is the tastiest part of the snack, trail mix wouldn’t be trail mix without raisins. I probably think this because raisins outstrip all other dried fruits as the “most popular dried fruit in the United States.” Whatever the reason, though, we can thank California for providing this tangy addition to our snack. It is, in fact, the only state that produces raisins commercially. This is especially impressive when you consider that the United States ranks second in worldwide raisin production. The only nation to outstrip the land of the free in raisins is Turkey. I guess that means the United States is just a good place to be a hiker. And California is a good place to be a raisin.

For the rest of August’s food holidays, check out this comprehensive list at Foodimentary.com. Oh! And if you think of it, find a pork farmer and give ’em a hug! He deserves it because he’s making your brats and bacon possible.