By Exhibit Farm
Nov 07, 2018
in Facts and Numbers,Food Holidays 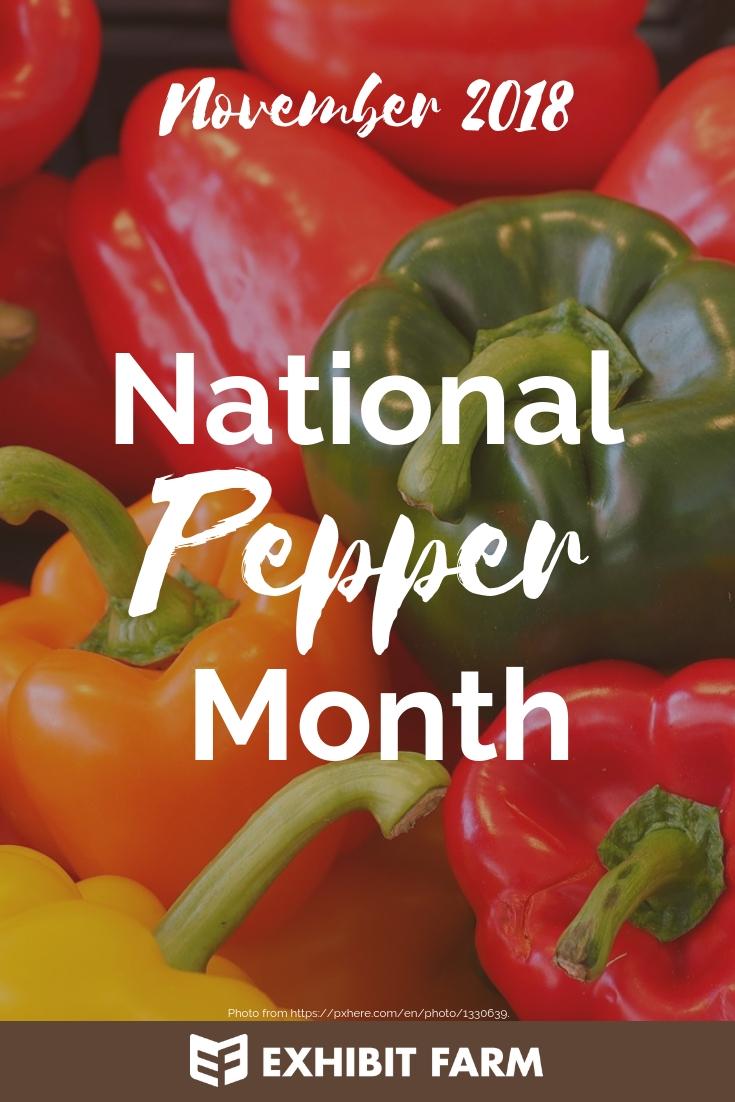 Sadly, our year-long series on monthly food holidays is approaching its end. Before we get too sad about this series’ imminent conclusion, however, let’s not forget about the final two months of the year that are yet to be discussed. In this month alone, we have a colorful spread of healthy treats to examine. Come to think of it, two of these treats just so happen to be the perfect additions to any Mexican dish, and the other two would likely make a delicious breakfast combo. But I suppose that would depend on your tastebuds. Either way, the following products of our excellent agricultural industry are all worth being considered as the next additions to your dinner table. So, without further ado, let’s dive in to the greens, reds, yellows, and whites of this November’s food holidays.

Not to be confused with the pepper seasoning that you grind into your fancy soups and salads, the kind of peppers we’re highlighting during this month of eating are probably some of the most photogenic foods to ever appear in your veggie drawer. Although considered a part of the vegetable club by the culinary world, these beautiful food ornaments are botanically fruits. According to the Agricultural Marketing Resource Center, the plants they grow on are in the same family as tomato, eggplant, and potato plants.

The different colors in peppers result from the length of time given to let a pepper ripen. We usually eat peppers at the green stage. Let them ripen longer, though, and the color will progress from green to yellow or orange and then on to red. That’s how we get the colorful varieties. But the beauty comes with a price. Because of the extra time needed to let peppers ripen further, the field losses for colorful peppers are way higher. This makes them more expensive to produce than the green ones. But is it worth it? Of course. Try to say no to a beautiful tray of colorful peppers and dip, and you’ll see what I mean. 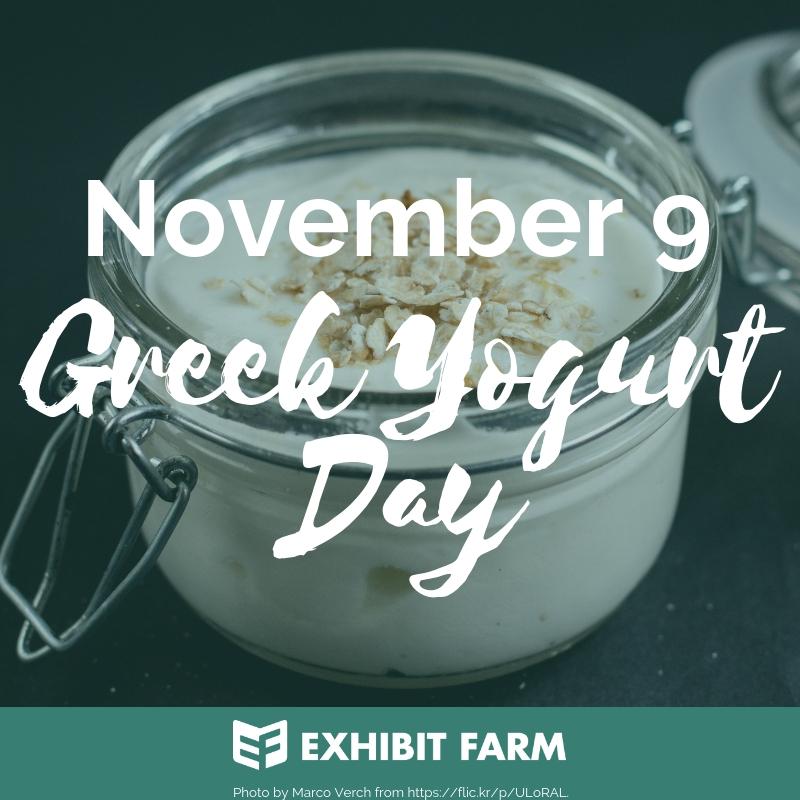 You’ve probably heard of it before, and you’ve likely even tasted it. But do you really know what yogurt actually is? Well, the plain and simple truth is that yogurt is really just fermented milk. Yogurt makers make the fermentation possible by adding certain bacteria, called yogurt cultures, to the milk. The result is the tangy, tart, and slimy substance that we eat for breakfast. The main difference between Greek yogurt and the regular kind is the amount of whey in the yogurt. Greek yogurt has less whey (no way!), meaning that it’s thicker (and also tangier). Regular yogurt, meanwhile, holds on to more of the whey (yes way!), making it more liquidy (and less tart). Also, folks generally see Greek yogurt as the more healthy option (way to go!).

To be honest, it’s pretty disgusting plain. But yogurt is the perfect addition to a bowl of delicious fruits and granolas. Not only that but, thanks to the probiotics present in yogurt, this dish is also helpful for promoting digestive health. It’s kinda like the hipster, healthy version of ice cream—admittedly no where near as tasty, but similarly white and dairy-based. In recent years, the average American consumed about around 14 pounds of yogurt per year. But yogurt itself is not as new and hipster as the hipsters would like to think. In fact, yogurt appears to have been around for millennia, dating all the way back to Turkish shepherds from 3000 BC.

Since this post is all about fun facts, here’s another “fun fact” for you. Did you know that you can make homemade Greek yogurt in a crockpot? All it takes is a little culture and some milk. (By culture I mean the bacteria kind, not the Taylor Swift kind.) In fact, as I write this, I’m enjoying my own bowl of homemade Greek yogurt. Complete with granola, strawberries, and bananas, of course. To find out how to work your own yogurt magic, check online for recipes like this one. 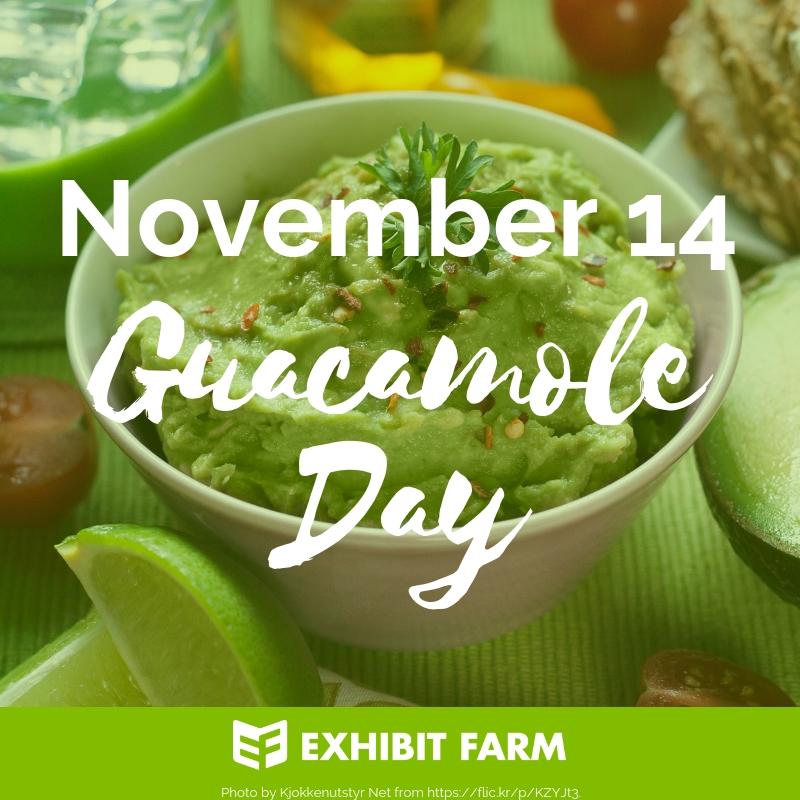 Guacamole may be the chip dip of hipsters. But, like Greek Yogurt, it was around long before the first hipster ever grew a beard. Before I explain the origins of the Mighty Guac, though, let me tell you about the source of guac: the avocado.

Affectionately dubbed an “alligator pear” because of its scale-like green skin and pear-shaped body, the avocado’s first home was likely southern Mexico. As the Purdue horticulture website notes, humans cultivated them “from the Rio Grande to central Peru long before the arrival of the Europeans.” Subsequently, these Europeans carried the green berry to every corner of the earth (metaphorically speaking). (And yes, the avocado is a fruit, specifically a berry, despite the fact that it often hangs out with veggies.) To this day, the avocado’s homeland of Mexico remains the top avocado-growing country in the world. California, Florida, and Hawaii are the main producers in the United States.

According to the Gainesville Guacamole website, the green spread itself originated not in the early hipster days of late 20th century America but much earlier. In fact, guacamole first appeared on the timeline in the Aztec empire as early as the 1500s. The original name of the yummy slimy stuff was “ahuaca-mulli,” which translates to “avacado-sauce.” To this day, the ingredients remain basically the same as the ones the good ole Aztecs used. I guess you could say that our beloved guac has stood the test of time. Makes sense, considering that it’s so undeniably delicious… not to mention good for your health. 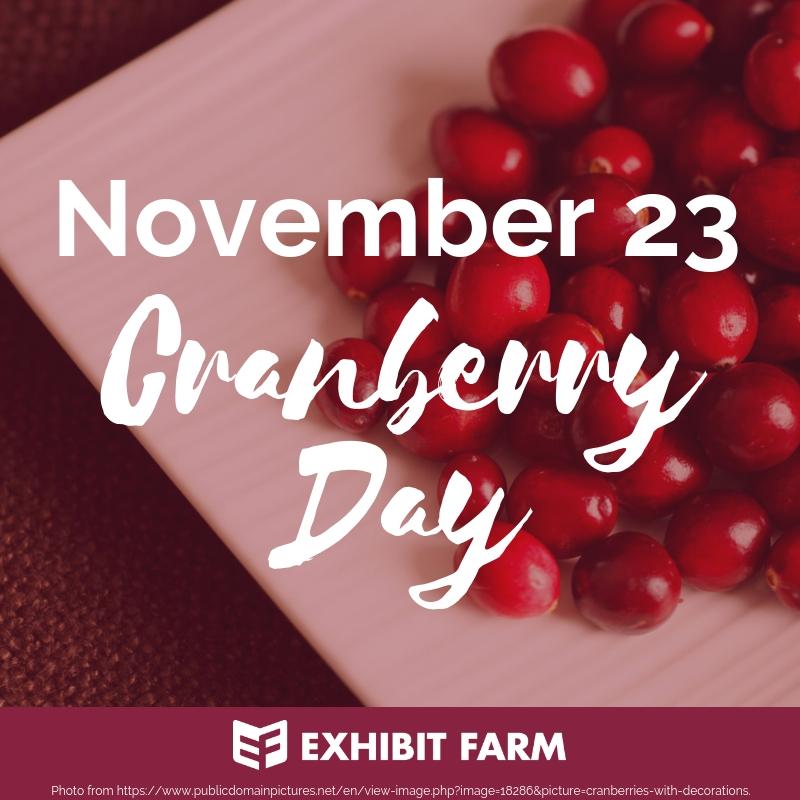 As one of the three fruits native to North America, the cranberry is something worth celebrating here in the United States. Recently, the U.S. population has consumed somewhere around 400 million pounds of cranberries in a single year. Most cranberries are processed for juices or sauces, and only 5% are sold fresh. Regardless of the berry’s final form, you can be sure that the majority of U.S. cranberries enjoyed by the world’s eaters come from Wisconsin. That Badger State is responsible for producing over 60% of the nation’s cranberry crop. Producers in Massachusetts, New Jersey, Oregon, and Washington follow at a distance.

Cranberries grow on a sort of shrub or low-growing vine and are close relatives of the blueberry and the huckleberry. Probably the thing that makes the cranberry stand out the most among its relatives is the way it’s harvested. Although some folks mistakenly believe that cranberries grow in the water, they don’t. They actually just grow in wetlands called bogs or marshes. Water does come in to play during harvest, however. To harvest the berries, cranberry farmers actually flood their fields. Thanks to the little air pockets in the berries, all the cran-goodness floats to the top of the water. This makes the little fruits easier for the farmers to gather. The fields get flooded again and are allowed to freeze over in the winter to protect the plants during the season of snow and icy weather.

November is the perfect time to celebrate the cranberry, thanks to the classic Thanksgiving cranberry dish. As the Agricultural Marketing Resource Center noted, 20 percent of all cranberry consumption in the United States happens during Thanksgiving week. This year, National Cranberry Day falls the day after Thanksgiving Thursday. So be sure to keep some of that cranberry stuff as leftovers for the next day.

Oddly, only one of these November foods is a notable Thanksgiving dish. But that doesn’t mean that you can’t enjoy the rest of these delicious snacks this month. And it also doesn’t mean that you can’t find a way to incorporate the others into your Thanksgiving dinner. Whatever you end up doing, remember to give thanks for the incredible bounty you’ve been blessed with. Thank your farmers, thank your cooks, and thank the one who provided it all.

For the rest of November’s food holidays, check out this comprehensive list at Foodimentary.com.