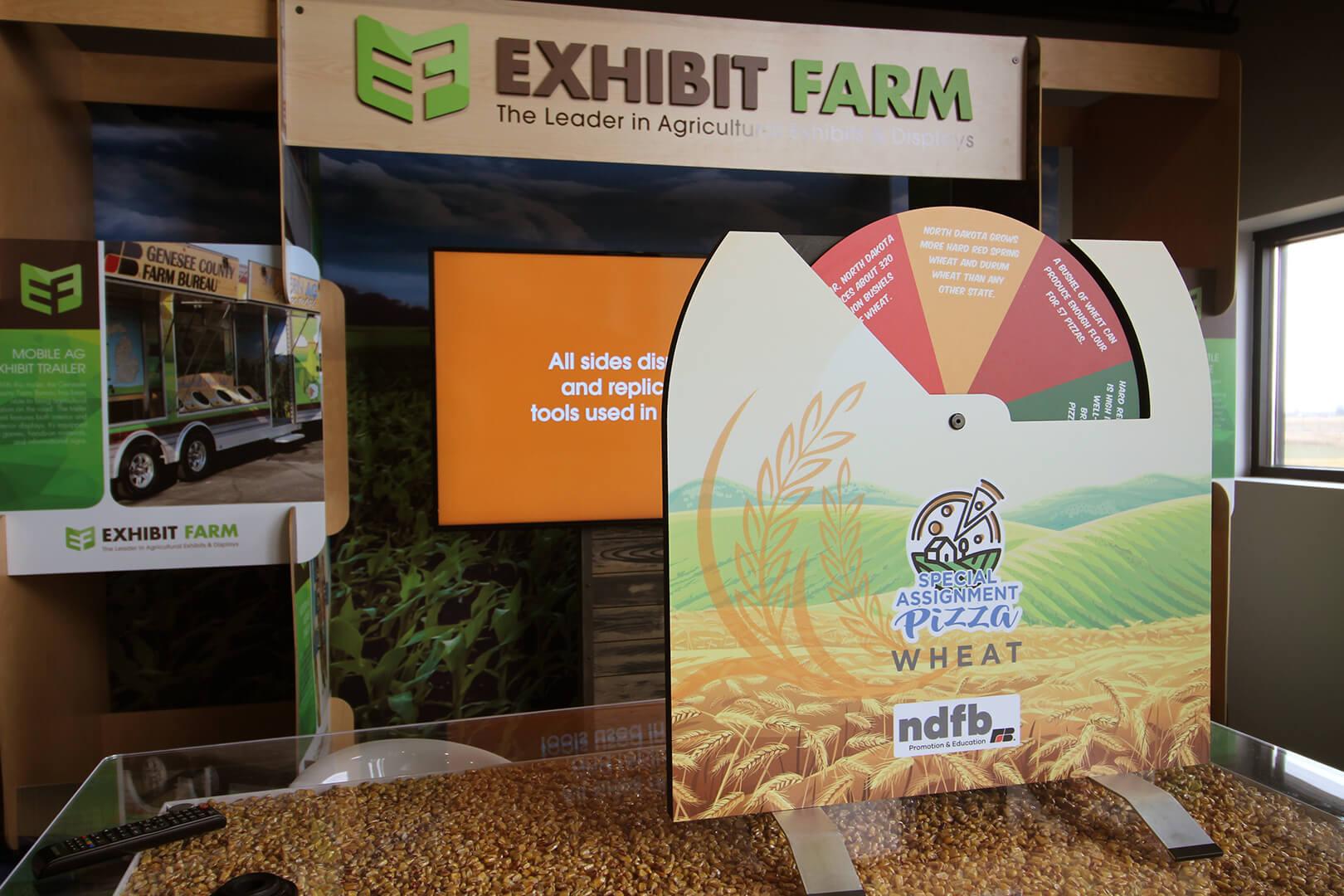 Who doesn’t love pizza? Gooey cheese, warm crust, salty meats — it’s just hard to go wrong with that. And there’s as many topping options as there are tastes: ham, onion, bell peppers, olives, basil, sometimes even things like artichoke hearts or whole cloves of garlic.

Consumers don’t often think about pizza as an agricultural product. But of course, every food is ultimately an ag product. All those ingredients we just listed have to get grown or raised somewhere. Pizza actually provides an especially convenient way to think about ag commodities because it uses so many of them. And, of course, it’s a popular subject. Like we said, who doesn’t love pizza?

That’s one reason our clients at North Dakota Farm Bureau (NDFB) created an ag literacy program about the ingredients in pizza. It’s a fun way to introduce kids to several different areas of the ag industry. NDFB liked the program, but after running it for several years, they wanted to upgrade their displays. And that’s where we came in.

(Each of these tabletop displays has their own page in the custom products section with more photos.)

Ag Facts, Brought to You by Pizza

NDFB runs their pizza program at school events, meaning they set up a table with displays scattered around it. Their displays used to be mostly standups, with a few posters on the table itself. It was full of good information, but it wasn’t the most visually exciting setup. So NDFB asked us to create a series of tabletop displays, each focusing on a different ag commodity. There were four that NDFB wanted to highlight: dairy, meat, wheat, and honey.

Of course, dairy is one of the easiest pizza ingredients to identify. What’s a pizza without cheese? It’s also an important commodity in North Dakota’s ag industry. For it, we created a tabletop version of our full-size milk bottle standup. Like the original version, the tabletop display features flip-up panels with trivia questions about dairy.

Wheat is the foundation of pizza, literally — it’s the main ingredient in the crust. It’s also a major crop for the state of North Dakota. Every year, the state grows over 300 million bushels! So, our tabletop display includes fun facts both about wheat in general and about wheat’s role in North Dakota.

The Tabletop Pig Display represents the meats that might show up on pizza: ham, sausage, or bacon. It presents facts not just about meat, but also about pigs themselves and about what important by-products they produce. Did you know, for instance, that pigs are an important source of the insulin used to treat people with diabetes?

And you might not think of honey as a pizza ingredient, but it’s often used to sweeten the dough for the crust. And it’s important to North Dakota — in fact, ND produces more honey than any other state in America. We found plenty of sweet facts for that display!

The Specs of the Solution

Like all our tabletop ag displays, these four are designed to be lightweight and easy to carry. They have different styles when it comes to presenting their information: two of them (Dairy and Honey) use flip-up panels with trivia questions, and two of them (Pigs and Wheat) feature wheels with facts printed on them. The variety keeps the displays from feeling like repeats of each other. Plus, since they’re interactive, they’re automatically more engaging.

With their cute animal graphics and the bright colors, these displays stand out easily. Maybe not as easily as the smell of pizza wafting through a lunchroom does, but certainly more easily than the posters they replaced.