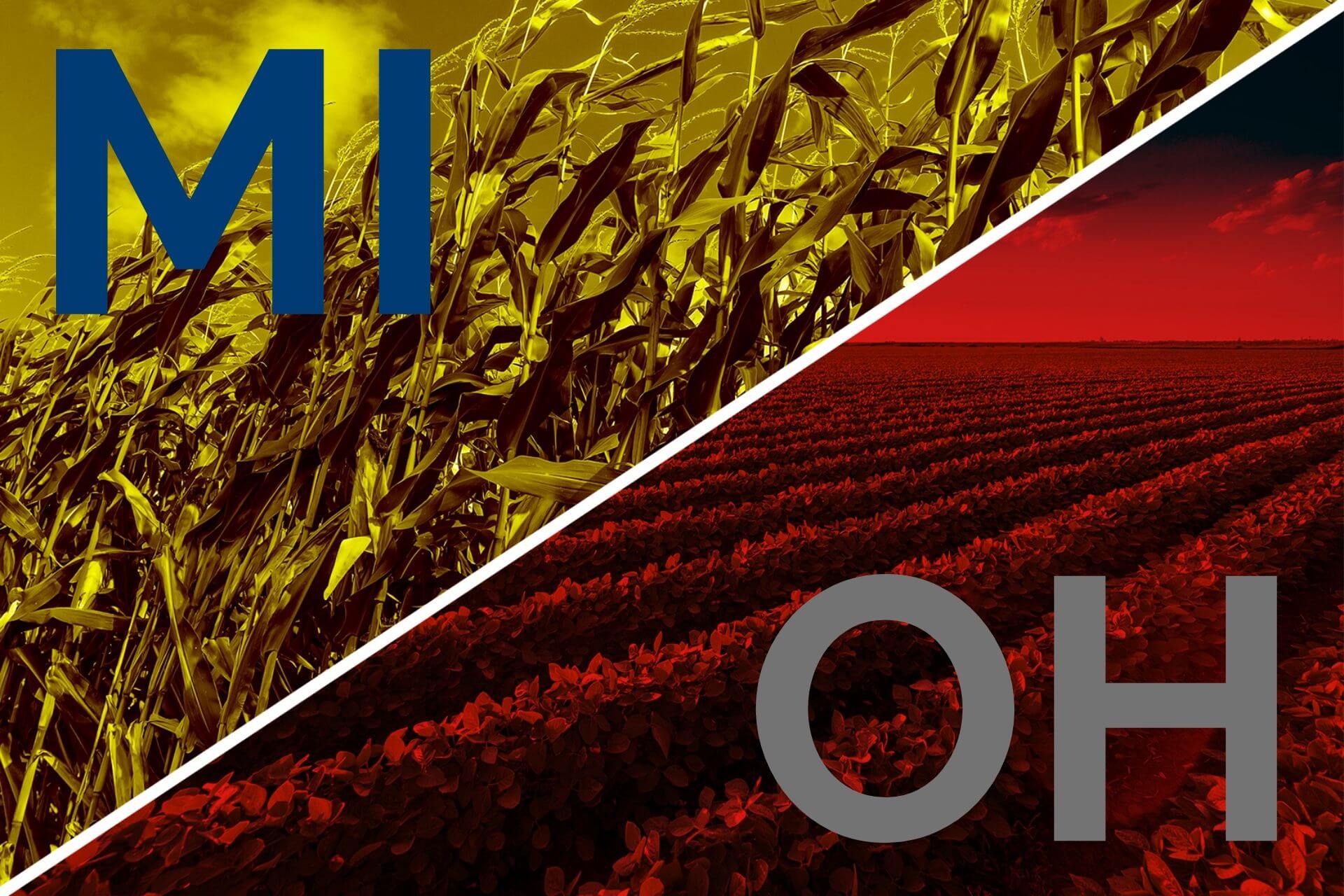 By Exhibit Farm
Nov 25, 2019
in Facts and Numbers,State Ag Spotlight

Thanksgiving is nearly upon us, folks. That means it’s time for pie, turkey, potatoes, and…college football. Up in this neck of the woods, the big game is (of course) the Michigan vs. Ohio State game. That rivalry’s been going on for a long time, for sure. Not to mention, Michigan and Ohio as a whole have a contentious history, going back to before Michigan was even a state. And since we tend to think in terms of agriculture around here, we started wondering: how do the two states stack up in terms of agricultural output?

Look no further for the results. Now, if the football rivalry threatens to derail the conversation around your Thanksgiving table, you’ll be prepared to distract people with the details of the agricultural rivalry.

Let’s start off with dairy, termed “the leading segment of Michigan’s agriculture economy.” Michigan has about 1500 dairy farms across the state, with an average of 300 cows per herd. That comes to about 450,000 dairy cows total. All those cows produce a cool 10.8 billion pounds of milk per year, which makes Michigan #6 in the nation for milk production. Moreover, Michigan’s dairy industry generates about $15.7 billion per year and directly or indirectly supports about 40,000 jobs. Whew! That’s a lot of big numbers.

On the other side of the state line, Ohio’s herds total about 261,000 cows, even though it has more dairy farms than MI (about 2,200). With fewer cows, it’s no surprise that Ohio produces less milk. In 2018, it “only” produced 5.4 billion pounds, about half of Michigan’s output. But, even though it’s only 11th in the U.S. for milk production, Ohio’s dairy industry had a higher economic impact than Michigan’s. In 2018, OH dairy brought in $23.4 billion and involved 114,000 jobs.

So why did Ohio’s dairy industry make more money if it produced less milk? Probably because Ohio produces much more cheese than Michigan. In 2017, the state made 22 million pounds of cheese, most of it Swiss cheese. In fact, about 49% of the United States’ Swiss cheese production happens in Ohio.

Outstanding in Their Fields

What about field crops? Well, in 2018, Michigan grew 2.3 million acres apiece of grain corn and soybeans. For corn, that amounted to 297 million bushels, valued at $1 billion total. And for soybeans, those 2.3 million acres translated into 109 million bushels and a revenue of $940 million. There’s also sweet corn, the kind that people eat. Michigan planted 9,700 acres of sweet corn last year and got 19 million dollars’ worth of corn out of them.

Ohio’s turn now. Last year, the state had 3.5 million acres of grain corn and 9,800 acres of sweet corn — more grain corn than MI, but about the same sweet corn. But that sweet corn sold for $23 million and the grain corn brought in $2.3 billion, more than Michigan on both counts. And when it comes to soybeans, Ohio grew 5 million acres of soybeans. That’s about double Michigan’s acreage, so it’s no surprise that the harvest (281 million bushels) and income ($2.5 billion) were also about twice as high as Michigan’s.

Lastly, let’s look at the states’ livestock industries. There’s a lot of types of livestock we could consider, but we’ll just stick with the biggest ones. From most to least, here’s the rundown of Michigan’s top livestock commodities: turkeys, hogs, and cattle/calves. What are the specifics, you ask? Well, in 2018, Michigan raised 5.3 million turkeys and just over a million hogs. Cattle/calves accounted for 1.2 million animals, of which 108,000 were adult beef cattle. What’s more, MI also had 12,000 goats raised for dairy, which puts it in an exact tie with Ohio’s dairy goat population.

Unfortunately for Michiganders, that’s the only major sector of the livestock industry where Michigan’s output equals or exceeds Ohio’s. Ohio produces a lot of meat. In 2018, that state raised 6.7 million turkeys and about twice as many hogs as Michigan (2.5 million, to be exact). Ohio isn’t ahead by much in the cattle/calves department — its total is 1.3 million to Michigan’s 1.2. On the other hand, Ohio’s percentage of beef cattle is higher; it has 307,000 all told.

So whether you’ll be pulling for Michigan or for Ohio State on Saturday, you should be able to find something to feel good about in these stats. After all, the ag industry is pretty strong in both states. Enjoy the game (if possible); enjoy your turkey on Thursday. And if you get the chance, say thank you to someone in the ag industry for helping bring all that food — the turkey, the green beans, the cheesy potatoes, the cranberry relish, the pumpkin pie — to your table. There’s really no better holiday to celebrate agriculture.