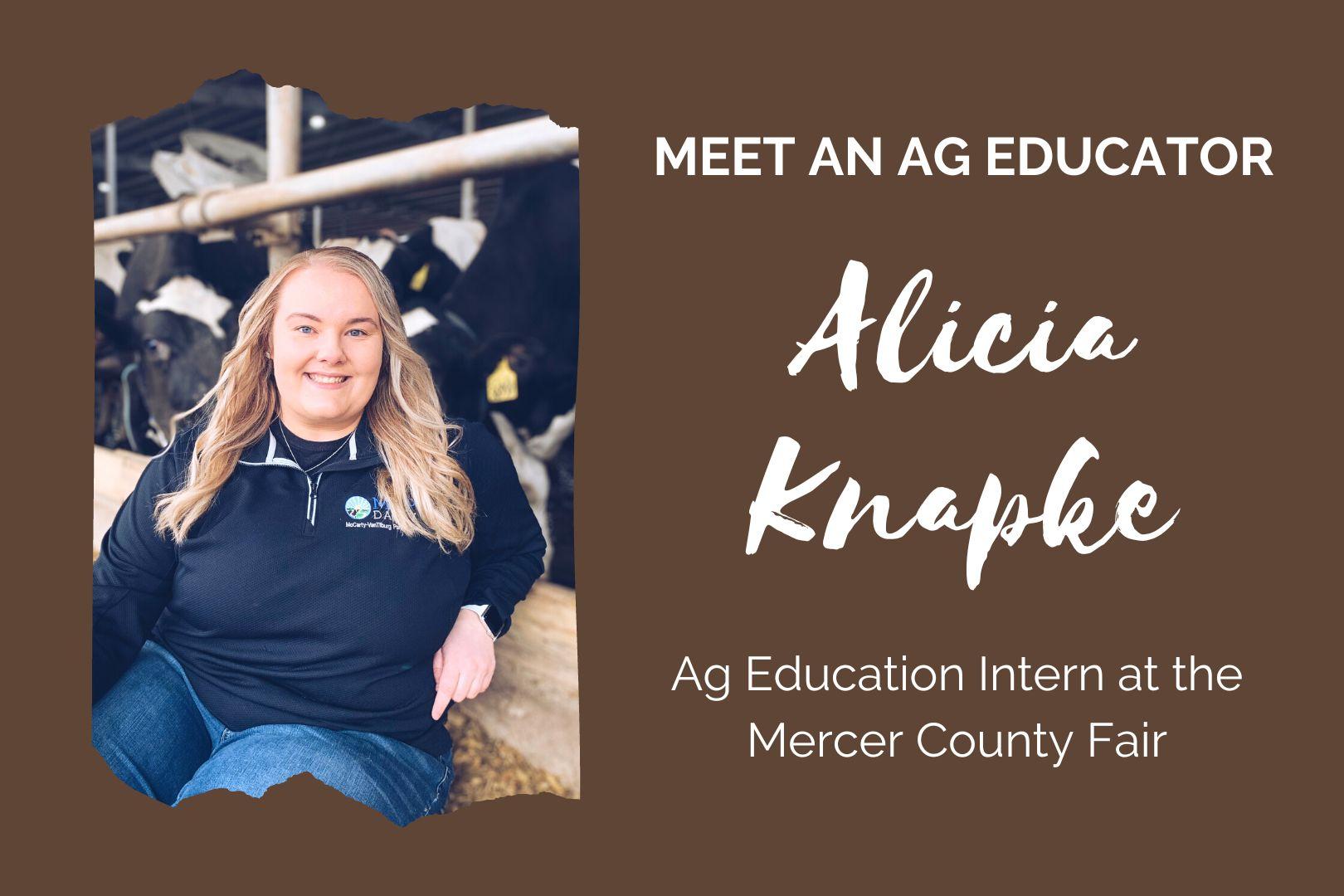 It’s fair season! Few things say “late summer” like those outdoor conglomerations of roller coasters, fried food, and farm animals. For consumers (both kids and adults), they’re a fun break from the normal routine. For farmers and 4-H kids, they’re a chance to show off their hard work. And for ag educators, they’re an opportunity to meet new consumers and tell them about agriculture’s importance.

Exhibit Farm: So what does your daily work at the fair look like?

Alicia Knapke: It includes a little bit of everything and anything really that they need me to do. I’ve been there for two fairs now. The first fair I really was just there learning, trying to help anywhere that I [could], trying to incorporate different ideas.

This year, I was able to incorporate more ag education pieces into the fair, which have really helped boost our ag education on the fairgrounds. We’re hoping to boost it even more in the next coming years, just because it’s still a really important topic even though we are in a very agricultural community.

EF: What are some of your priorities for ag education at the fair?

AK: I would say the biggest thing I had to do was make different educational pieces. Not necessarily being the educator, but making pieces to allow for people to read and learn just a little bit.

The biggest thing with ag education is that people don’t want to be taught, they want to take their own time to teach themselves. So I was able to create different posters and pieces so people [could] read the facts, kinda educate themselves on it. For example, from Exhibit Farm we got the milk carton that provided dairy facts, and the stackable cubes that had other facts on them as well.

We also made retractable banners we put out in all the different barns, just to have facts about all the livestock animals we had around. So those were able to educate people on some things they maybe didn’t really know a lot. Other things that we did — we put little mirror clings on each mirror in the restrooms for people to read when they wash their hands. It’s just a quick thing, but it does help get some of those facts out there.

EF: How does ag education at a fair differ from other events? What are some of the unique challenges or opportunities at fairs?

AK: So I like to say you have two sides of the fair: you have the junior fair side and the senior fair side. For the junior fair, you have all your animals, you have all your livestock, all your projects, all those people who have been involved in 4-H. Those people are already kind of into that agriculture side. Then you have the senior fair, which includes your rides, your games, your entertainment. So that’s kind of where the fair clashes together to bring both groups of people.

The fair allows you to open the door up to many other people that maybe don’t know a whole lot about agriculture, because they are coming to the fair to do [other] things, whether it’s going to a concert at the grandstands or going to ride rides. At least if they go out to the barns you’re able to get them open to the idea of learning different things.

So that’s where that challenge comes in. Not everybody wants to be educated because everybody’s there for a different purpose. But, being able to provide [self-educational pieces] allows you to open that door for everybody.

EF: And lastly, why is ag education important to you personally? What made you want to start working in this area?

Anyway, those different realms have really shown me what agriculture is and how important it is across the board. And why it’s so important to educate people about the things that we’re doing in agriculture, ’cause there are a lot of misconceptions. Just being able to tear down those misconceptions to allow for people to learn a little bit, that’s what really is the biggest thing for me. [Between] the fairgrounds and also working at MVP Dairy in Celina — they have a large dairy farm that we give tours of — those two jobs together have helped me increase my love for agriculture and for educating the public.