By Exhibit Farm
May 07, 2018
in Facts and Numbers,Food Holidays

Well, we’ve got another month on our hands, folks. So, today, we’re featuring yet another set of national food holidays to continue our series. Hopefully the fun facts here will inspire you to dig deeper into some of your other favorite snacks that we’ll be celebrating as a nation this month. Most importantly, though, consider this post a reminder to go and thank some farmers for all of the hard work they do to help produce our food. Before you do, stick around to see what we’ve got in store for you today.

This May, we’ll be learning about eggs, coconuts, apples, and beef. Plus, we’ll look at the roles they play in the country’s agriculture—and in some of the best foods on this side of the moon.

To begin our celebration of May’s food holidays, let’s talk about eggs. Eggs are a pretty big deal in the world, and mainly because of their health benefits. According to the Incredible Egg website, eggs have 6 grams of protein, no sugar, and no carbs. On top of that, they don’t come with any additional ingredients that could potentially take away their natural healthy awesomeness. Plus, one serving of eggs is only 17¢, making it probably one of the cheapest and best snacks you could ask for. Talk about a tasty treasure chest of health!

Unfortunately, the United States doesn’t get the gold medal when it comes to worldwide production of this golden snack. Rather, China is on the top of the international egg game. That nation, in fact, produced over five times as many eggs in 2016 than the United States. But the good ole country of stars and stripes achieved the silver medal position in egg production. This is thanks to its many great egg-producing states. Some of these top egg-producing states are Texas, Pennsylvania, Indiana, Ohio, and Iowa. Indiana and Ohio are neck-in-neck for second place, but Iowa is in a strong lead.

According to the American Egg Board website, eggs are one of the few “food commodities” that have actually gained increasing popularity, at least recently. Between 2015 and 2016, the per capita consumption of eggs in the United States jumped from 256.3 to 274.7 and remained steady in 2017. It’s demand like this that makes it worthwhile for the layers of America to produce their approximately 8 billion eggs every year.

You may be right about that part. But it is also true that agriculture has everything to do with pretty much all the pies we eat. Of course the cream is courtesy of our dairy cows. And that automatically connects it to the ag industry. But, then again, so is the “coconut” part of this delicious concoction. It may come as a surprise to you, but there’s actually a whole industry behind coconut production.

The United States doesn’t have it’s finger very deep in this coconut industry pie (get it?). But this is probably due mainly to climate. I mean, Michigan just isn’t the place to grow tropical plants, and neither are most of the other states, for that matter. However, as Wikipedia so kindly informs us, coconut palm trees can grow in the two states of Hawaii and Florida. They can also grow in some U.S. territories, including Puerto Rico and Guam. But, like I said, the United States doesn’t really produce all that many coconuts. The nations at the top of the coconut industry are Indonesia, the Philippines, India, and Brazil. The top nation, Indonesia, produces over 200 million tons (which is about the same as 183 million tonnes) of coconuts in a given year.

I should add—and, not to burst your bubble or anything—but the coconut isn’t actually a nut. In fact, the part that we usually think of when we think “coconut”—that brown, hairy-looking football—is actually a seed. It’s the thing inside of the greenish coconut fruit that, if planted, will grow into a new coconut palm tree. How cool is that? It’s the white meat of this seed that shows up on coconut cream pies, with its funky texture and distinct, coconutty taste. This or some delightful concoction that comes from this meat called “cream of coconut” often appears on the insides of coconut cream pies as well, like in this Martha Stewart recipe. Some sources rank this pie among the top 25 most popular pies in the nation, but it’s especially popular in the South. Even if you’re not in the South, treat yourself to some this coming May 8. 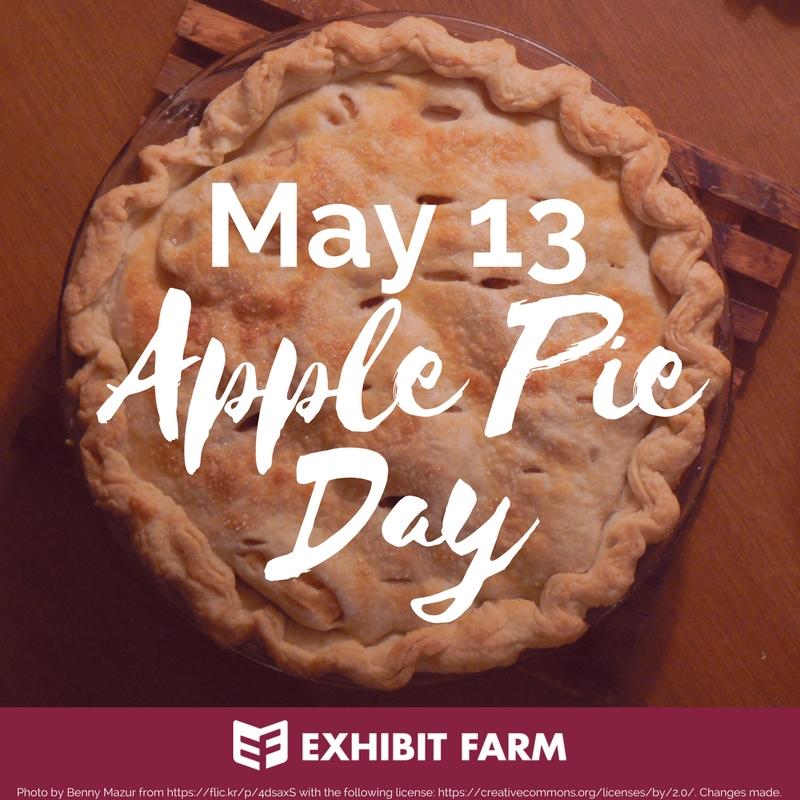 Ah yes. The essential American dessert: apple pie. It’s especially angelic when it’s still hot and when you’ve got a scoop of vanilla bean ice cream melting next to it. In my opinion, ice cream is pretty much a “must” when it comes to apple pie. But apple pie would still be apple pie even without ice cream. Whereas, without apples, apple pie would not be apple pie… for obvious reasons. Due to the apple’s centrality to the delectable dessert, let’s take a look at this fabulous fruit that makes our beloved American dish possible.

The apple has been a favorite human snack for years. Its popularity stretches as far back as ancient Greece and Rome. Interestingly, some sources conjecture that the plant first originated from the area between the Caspian Sea and the Black Seas. But the seeds first came to the New World with early settlers. According to AgMRC, John Chapman, the fellow better known for his nickname “Johnny Appleseed,” was the man responsible for spreading apple trees across the midwest.

Even though the apple did not originate in the United States, it still does pretty well in this country. In fact, the U.S. ranks second in the world for apple production after China, the world leader. Johnny Appleseed did his job well, apparently. Today, the top apple states in the country are Washington, New York, Michigan, and Pennsylvania. A total of 32 states grow the popular fruit crop, and the country has well over “200 unique apple varieties.”

In fact, the apple is the most popular fruit among United States consumers, surpassing even oranges and bananas in pounds consumed per year. When it comes to the pie variety, nearly one in five Americans prefer apple pie to any other pie. Speaking of the United States’ love of the apple and its pie, various apple varieties are the official state fruits in at least seven states, and apple pie is the official state pie of Vermont. With that in mind, of all of May’s food holidays, it would make sense for Apple Pie Day to be a favorite among Vermontians.

Beef! It’s what’s for dinner. Or, at least, that’s how the slogan goes. Hopefully that slogan will ring true for all of you on hamburger day later this month. Because, after all, beef is for hamburgers, and hamburgers are for beef. (Please no turkey burgers, guys. At least, not on this special day.) And, to make it even better, the United States is king in beef production, simultaneously making us the king in hamburgers.

According to the USDA Economic Research Service, the United States has the world’s largest cattle-fed industry and is “the world’s largest producer of beef.” As Statista concisely explains, “In 2017, approximately 26.4 billion pounds of beef were produced in the U.S.” Most of these beef cows are raised in Texas and in the Great Plains states. Currently, there are somewhere around 30 million beef cattle across the country that make this enormously popular industry possible.

When it comes to the burger side of our beloved beef, we’ve got some insane statistics. The Daily Meal says that the entire burger industry is a “$73 billion business” and that the country has somewhere around 50,000 burger joints total. But that’s not all. Hamburgers are the most popular beef meal in restaurants, accounting for over seventy percent of “all beef consumed in restaurants.” And that’s probably because our countrymen eat a grand total of 14 billion burgers in a single year. Which, says The Daily Meal, “equals out to more than 440 burgers per second.”

Who knows? Maybe Hamburger Day this year will bump up the hamburger eating rate by a couple hundred more. You can do your part by making beef a part of your dinner. That would be the perfect way to commemorate one of the last of May’s food holidays. And to kick off your summer.

For the rest of May’s food holidays, check out this comprehensive list at Foodimentary.com. Have a sweet and yummy May!