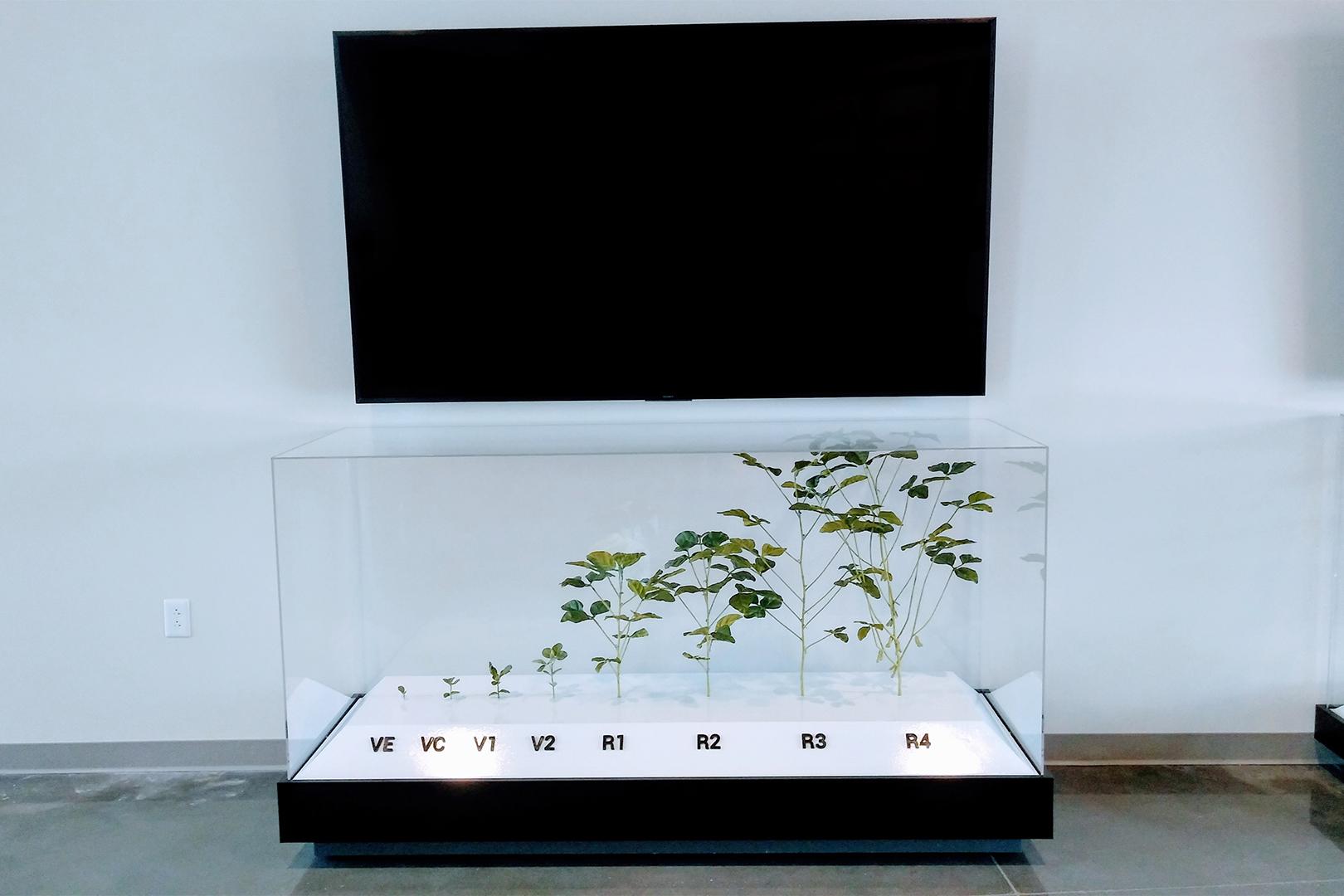 How Does Your [Soybean] Grow?: Soybean Growth Stage Display

“Mistress Mary, quite contrary, how does your garden grow?” Did you ever hear that nursery rhyme? The answer is ”With silver bells and cockleshells, and pretty maids all in a row.” Explanations for the rhyme’s meaning vary, but they seem to agree that the rhyme isn’t talking about a literal garden. Which is kind of a pity, because some people actually want to know how gardens or plants grow.

Our clients at the Missouri Soybean Association knew this. They wanted to help people visualize the development of a soybean, so they commissioned us to create a dozen artificial soybean plants showing the soybean’s growth stages.

(You can see more photos of this agricultural exhibit on our custom products page.)

What are Soybean Growth Stages?

Soybean fields are common in the Midwest, but that doesn’t mean passerby understand them. It’s awfully hard to get a good look at plants as you’re driving by, after all. But since soybeans have so many uses in everyday life, they’re worth knowing more about. And that’s why Missouri Soybean opened the Center for Soy Innovation, a facility designed to show people all the ways soy impacts their lives. They wanted to have a display in the Center explaining just how soybeans mature, using lifelike artificial soybeans that captured each of the soybean plant’s growth stages.

Soybeans go through precise growth stages as they develop. The initial stages are called the vegetative stages. This is when the plant’s focusing on growing bigger and putting out more leaves. Once the first flower appears, the soybean has entered the reproductive stages, where it’s focusing on producing those oh-so-useful soybeans.

That’s a slight simplification, but you get the impression. Each growth stage is defined by a set of specific standards measuring the development of leaves or seed pods, which means we knew exactly what features our soybean models needed to have.

We’ve made soybean growth stage models before, but never as many as the display Missouri Soybean wanted. They imagined a growth stage display that would show the soybeans’ development all the way from seedling to harvest-ready plant. That meant no fewer than twelve artificial soybean plants, each crafted with meticulous detail.

Our first challenge was the sprouts. We hadn’t made soybean plants that small before, and the leaf structure for seedlings is different from more developed plants. But our plant artists figured out how to make it work. Then they tackled the problem of creating a lifelike color for each stage of development (there are slight differences there too). Their hard work paid off with twelve museum-quality artificial soybeans.

And then, on top of the soybean growth stages display, Missouri Soybean asked for three other artificial soybeans. These ones would stand alone, and, like one display we made with corn plants, they’d have exposed roots. The exposed roots were another first for our team, but we successfully replicated them — right down to the distinctive nodules.

Since the Center for Soy Innovation opened, Missouri Soybean reports that the soybean growth stage display has gotten a lot of traffic. Like we were saying, crop fields may not be quite the same as gardens, but people still ask how they grow.