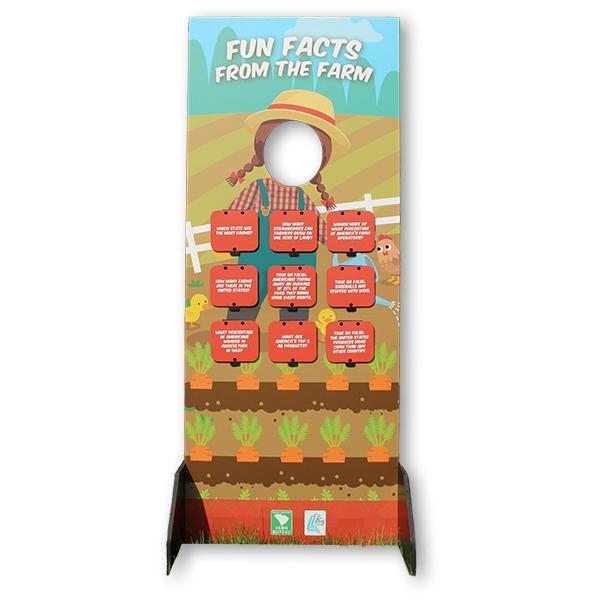 Include your logo at no additional charge. Send us the file at info@exhibitfarm.com.

Reaching consumers with facts about agriculture is an important job.  But that doesn’t mean your approach always has to be serious.  Sometimes, a fun approach can be the most effective.  That’s the idea behind the Farm Kids photo op.

Originally designed for South Carolina Farm Bureau’s exhibit tent, these photo ops were surrounded by plenty of other displays. Most of them were about specific crops that are important to South Carolina agriculture. But SCFB wanted some more general displays too.

These kid-friendly photo ops fit the bill exactly.  As their header says, they do offer “Fun Facts from the Farm.” Their main job, though, is providing a chance for people to get a fun photo of their kids pretending to do farm chores. We developed versions for both boys and girls, each one with their own bright and appealing graphics.

Although the main point is just to have fun, the photo ops do have an educational aspect, too. Each of them has nine flip-up panels on the front with trivia questions about farms and food.  They’re not commodity-specific; rather, they focus on farming in general.  The questions include intriguing stumpers like, “What’s the name for a group of pigs?” (answer: a sounder) or “True or false: Thanksgiving is the holiday when Americans spend the most on food.”  (Believe it or not, that’s actually false!  We spend more on food for Independence Day.)

As a side benefit, the Farm Kids photo op is an easy way to encourage people to interact with you on social media.  People love sharing cute photos of their kids.  And because you provided the photo op, you can easily remind people to tag or mention you in their posts. That way, even more people can see that your exhibit is a fun place to be!