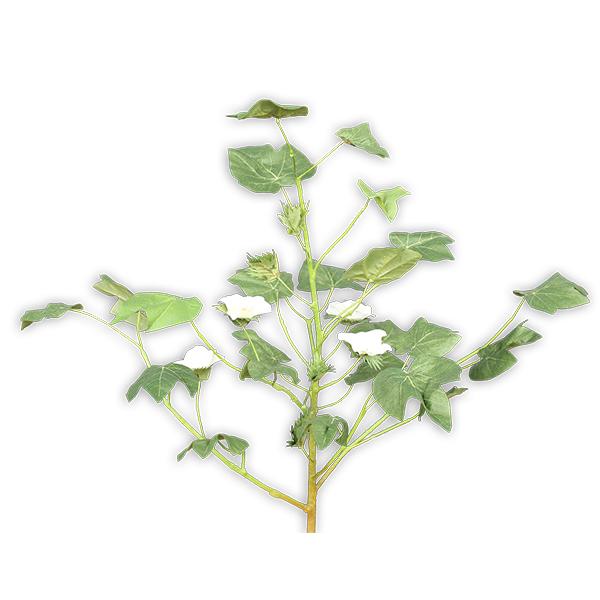 Sculpted and painted by hand, this portable cotton plant model depicts the plant’s structure in realistic detail. It shows the leaves, squares, and flowers of a cotton plant in its bloom stage.

You won’t find cotton in stock photo databases as the default “farm” image, unlike those waving rows of corn or wheat. But it’s actually the number-four crop in the American farming economy. Given its importance, it’s not surprising that one of our customers wanted a realistic model of the cotton plant.

It may not be up there with corn and soybeans, but cotton is still a major row crop for the United States.  The American cotton crop was worth over $7 billion in 2020, after all. Cotton grows in a somewhat restricted range — mostly in Texas, and otherwise only in the southern half of the United States.

Our cotton plant model depicts the plant at the midpoint of its growing cycle, in the bloom stage.  The cotton bolls haven’t developed yet, but the creamy white flowers show where they will form eventually.  Since the plant hasn’t started to dry out in the bloom stage, our model’s accurately-shaped leaves remain green.

Our craftsmen took particular care in crafting the squares. They’re an oddly-shaped plant part. But since they’re what the flowers — and ultimately the bolls — develop from, they’re also important. We included several of them along the cotton plant’s branches.

We typically enclose our plant models in a clear plastic case.  The case sides attach to the base with thumbscrews, meaning you can remove the case if you want to. The case makes the model easier to transport, both by protecting it and by providing a handle on top you can use to carry it easily.

Interested in teaching people about not just cotton, but all of America’s major row crops?  Check out the other realistic plant models we offer, including corn, soybeans, sugarbeets, and more.